OVAC championships on the line 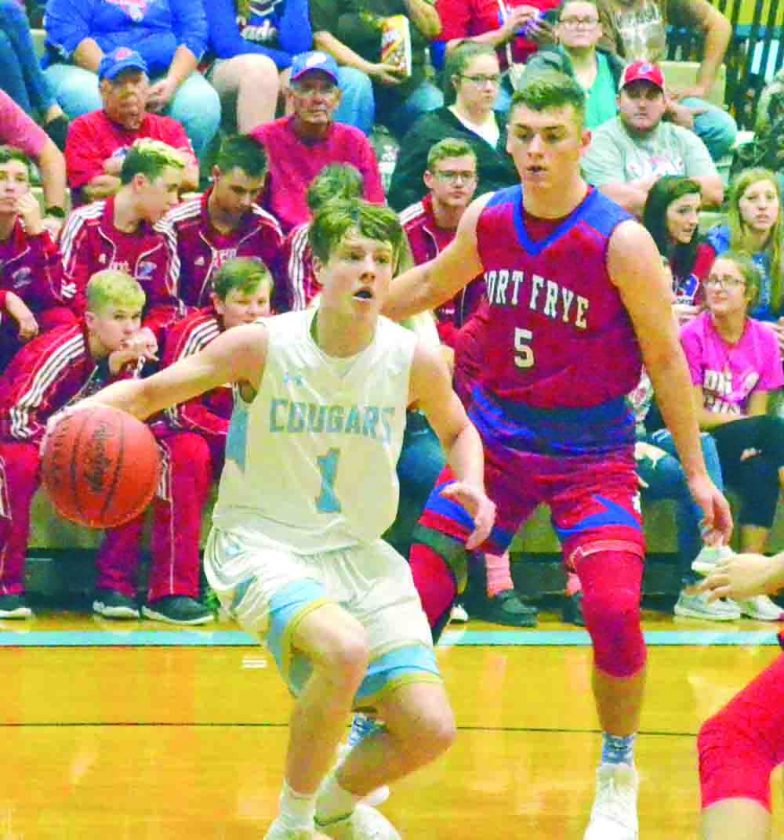 Times file photo Frontier’s Tanner Bills (1) handles the ball as Fort Frye’s Caden Fryman (5) defends during a high school boys basketball game earlier this season in New Matamoras. Both Fort Frye and Frontier are scheduled to play in Ohio Valley Athletic Conference championship games Saturday at Ohio University Eastern. Frontier will take on Madonna at 2 p.m. for the Class 1A title while Fort Frye will face off versus Union Local for the 3A crown.

The top-seeded Frontier Cougars will take on the No. 2 Madonna Blue Dons at 3 p.m. for the Class 1A title. Later in the day, the third-seeded Fort Frye Cadets will face off against the top-seeded Union Local Jets at 6 for the 3A crown.

The Cougars are 13-7 overall after defeating Cameron 54-47 in Tuesday’s semifinal game. Madonna held on to beat Hundred 63-60 Tuesday. Frontier head coach Roger Kirkpatrick is impressed with what he’s seen from the George Vargo-coached Blue Dons.

“They like to run and gun, get up and down the court,” Kirkpatrick said. “They like high-scoring games. They’ve got some guards and a nice post player. They’re well rounded and well coached too.”

Brennan Secrist, Lucky Pulice and Evan Boniti have been Madonna’s top scorers this season. Secrist is a 6-foot-5 post player.

“He’s a good athlete down low, but the key is I have two of them,” Kirkpatrick said, speaking of seniors Logan Brookover (6-3) and Kyle Daugherty. “We’re hard to match up with if those two come to play. When them two are on together, I think we’re pretty hard to stop.”

Brookover led Frontier with 23 points and eight rebounds against Cameron, while Daugherty consistently scores and rebounds in double figures.

“We play six kids, and they’re all important,” Kirkpatrick said. “It takes all six of them for us to be good.”

Tanner Bills, who added 16 points Tuesday, Breckin Hoff and Corby Curtis round out the starting lineup, while Jake Gutberlet comes off the bench.

Kirkpatrick said the Cougars’ tough schedule has helped prepare them for the OVAC championship.

“We play a lot of double-A and triple-A teams in the OVAC,” said Kirkpatrick, whose Cougars last won the OVAC in 2004. “We’ve won some of those and had some close losses. Hopefully that’s prepared us for this game.

“I think the school is excited. It’s good for the community.”

Two of Frontier’s losses came to Fort Frye, which owns a 15-3 record.

No. 2 Linsly took FFHS down to the wire in Tuesday’s semis, but Eric Henniger’s squad held on to advance.

“It’s a big deal,” Henniger said. “It’s always one of our goals to win the OVAC championship. The last couple years we’ve been tripped up in the semifinals, so coming out of Linsly with a win is big. Our kids are very happy to get here.”

The Cadets are hoping to accomplish exactly what the Fort Frye girls did, which is take down No. 1 Union Local for the OVAC title. It would be the boys’ first OVAC crown since 2014, but it won’t come easy.

The Jets improved to 15-5 after defeating Magnolia 47-43 in overtime. The Zach Delman-coached squad started the season 1-4, but has won 14 of 15 games since.

“They have a lot of quick guards and they can shoot the 3,” Henniger said. “We’ll have to guard the line a lot, but they’re good at finishing inside as well.”

Luke Merritt is the team’s top scorer, but Matt Bateman, Zach Bateman and Nathan Meyer are threats too.

Fort Frye will counter with its talented trio of Zane Wallace, Brady Schilling and Kelton Fogle, who are averaging 12.8, 12.4 and 12.1 points per game, respectively. Schilling also leads the team with 5.9 rebounds per contest. Look for Luke Huffman and Caden Fryman to also get starting nods, but the Cadets are nine-deep as Brian Adkins, Dylan Hart, Ethan Brooker and Owen Brown all contribute off the bench.

“We can go all the way down to our ninth guy and not lose a lot,” Henniger said. “We’re pretty confident in all our guys off the bench. Our bench has won us a lot of games.”

Henniger said the Jets can push the tempo or slow it down, and they will give plenty of different looks defensively whether it’s zone, press, switching, etc. The Cadets will need to be ready for just about anything.

“We’re going to have to shoot well,” Henniger said. “Union Local can score, so we’ll have to somehow manage to get stops, which is easier said than done. But our guys have been playing really good defense. I think we’ll be ready.”