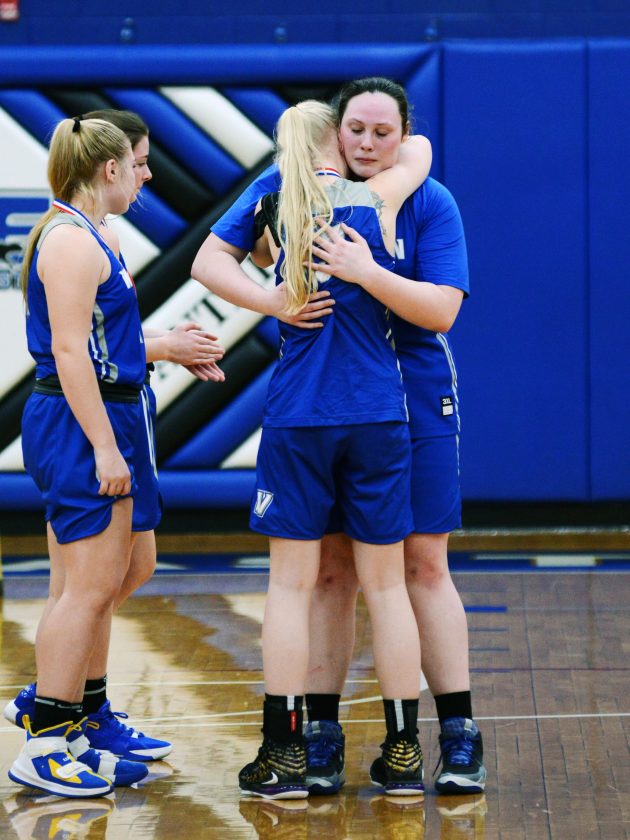 In the end, it was the fifth-ranked Sheridan Generals who were victorious over the No. 4 Warren Warriors, 45-39. The win gave Sheridan (23-2) its third straight district championship.

Warren had its 22-game winning streak snapped and finished the season 23-2 overall, capping an incredible run.

“This (loss) did not define our season,” said Warren head coach Amy Colgrove. “This is a close-knit group. We lost in first round of sectionals last year and they didn’t like that feeling. They worked their butts off in the offseason. The love that they have for one another and the work ethic they’ve put in and committed to shows and paid off.”

Warren trailed by as many as eight points in the first half when Sheridan standout Kendyl Mick drained a 3-pointer and then stole the inbound pass for a layup to make it 19-11. Warren closed the half on a 6-0 run thanks to two baskets by Abbie Smith and an acrobatic drive by Molly Grayson to cut it to 21-20 at halftime.

Smith was a monster in the paint for the royal blue and white, finishing with team-highs of 18 points and seven rebounds

“I thought Abbie had a great game,” Colgrove said. “She played fantastic.”

Smith’s bucket to open the third quarter gave Warren its first lead of the game at 22-21. That was the first of eight lead changes in the second half.

Sheridan quickly reclaimed the lead on Aubrie White’s triple and stretched the advantage to five, 27-22, on Faith Stinson’s layup. Smith responded with an inside score before knocking down a jumper to bring Warren back within one. Millie Ryan then scored in the paint to put Warren back on top. Mick banked in a J before Grayson drove for a basket as the two teams went back and forth.

In the final seconds of the third period, Grace Conrad dished to an open Bailey Beckstedt beyond the arc and she drained the 3 to make it 32-30, Sheridan, with eight minutes to play.

Mick canned another mid-range jumper to open the fourth, but Olivia Alloway splashed a corner 3 before Ryan’s short jumper gave Warren its final lead of the game, 35-34.

Sheridan answered with an 8-0 run, with Mick scoring four points and White hitting a trifecta, to go up 42-35 with 2:15 left.

Smith powered her way to another basket, but Mick responded with a pair of free-throws to keep the margin at seven. Savannah Banks’ basket with 1:14 to go kept Warren’s hopes alive, and Sheridan’s next two possessions resulted in steals by Saboley and Grayson, but Warren failed to cash in on the offensive end. Eventually, time ran out.

“We lost to a good team,” Colgrove said. “That’s a very good team. I told them ‘Walk out of the locker room with your head high. There is nothing to be ashamed of.'”

Mick netted a game-high 20 points to go along with seven boards and five steals. Beckstedt finished with nine points and six rebounds while Conrad handed out a game-best four assists,