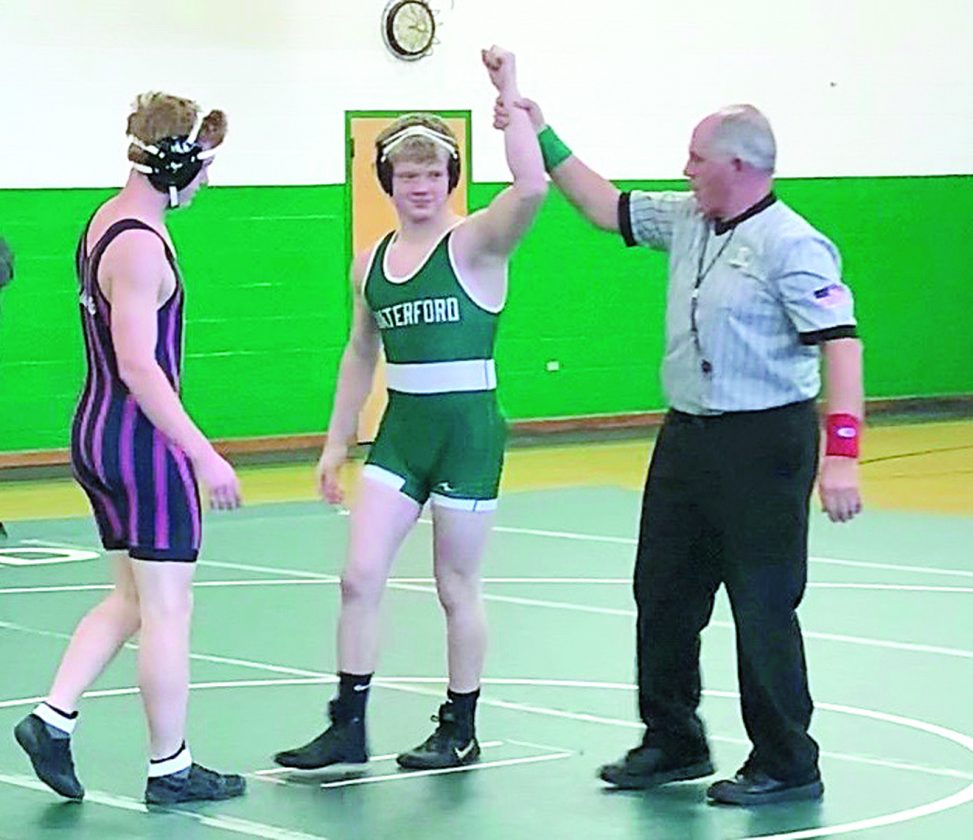 Courtesy photo Waterford’s Haden Offenberger has his arm raised after a win during a high school wrestling match Wednesday. It was the 100th career victory of Offenberger’s high school career.

The Waterford High junior wrestling standout hardly broke a sweat as he pinned Fort Frye’s Joe Duskey in 11 seconds in the 160-pound weight division in a dual rivalry match Wednesday afternoon in front of the Wildcat student body.

“I set two goals my freshman year –100 wins and to make the podium at state,” Offenberger said. “This is a big one to get my 100th in my junior year, but I have a lot of work left to do.”

Offenberger is currently ranked 20th at 160 in Ohio Division III after defeating 10th-ranked Owen Oliver of Barnesville a couple of weeks ago at New Lexington.

In achieving the milestone, the Wildcat grappler “broke the Offenberger curse.” Both his father (Greg) and cousin (Zeb) finished their wrestling careers with 99 wins apiece.

Waterford is slated to wrestle in the Tri-Valley Conference tournament Feb. 22 at South Gallia.

The Josh Seagraves-coached Cadets are slated to wrestle at 10 a.m. Saturday at Caldwell High in Noble County.

Going into the tri, undefeated Peyten Kellar, third ranked in the state at 145 in Ohio Division II and an OVAC champion, owned a 31-0 record.

Last Saturday, Warren wrestled in the State Duals at Philo and dropped a 48-33 decision to Sheridan.

“We were missing one wrestler, so we elected to wrestle everyone up one weight class from 113 to 182,” said first-year Warrior boss Jeff Parsons.

On Friday at 6 p.m., Warren is scheduled to compete at the East Central Ohio League (ECOL) Championship at River View.

Snyder, a freshman, is slated to compete in the first OHSWCA Girls State wrestling Tournament at Hilliard Davidson High Feb 22-23.

“Right now, Hayley is currently ranked fourth in the state at 101 in the girls division but has a win over the second-ranked girl already,” Parsons said. “So we are excited to be taking her to this event.”

After Friday night, Warren is then scheduled to wrestle at the Caldwell Duals Saturday.

The state series starts with sectionals at Alexander High Saturday Feb 29 with the top 4 advancing to districts at Claymont High March 6-7. Then, the state tournament will be Friday March 13-16.

Also competing in the ECOL event on Valentine’s Day will be Marietta High.