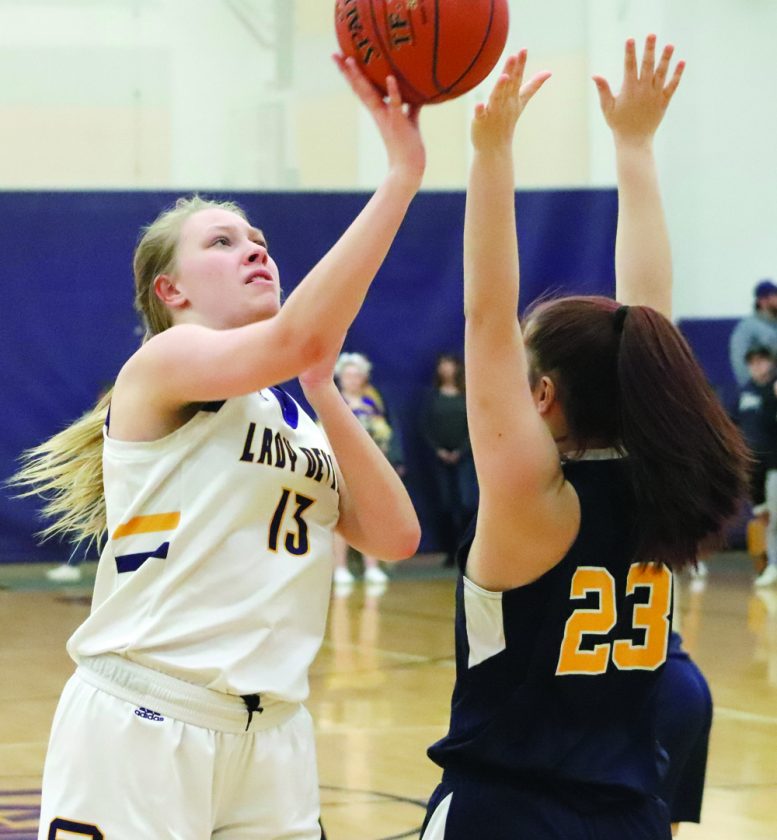 ST. MARYS — Head coach Howie Meeks and his St. Marys girls’ basketball team drew a hard task Wednesday in a Class A Region I co-final. Listed on the agenda as priority number one read a Cameron team the Blue Devils already bested twice earlier this season.

Only this time instead of just a tick in the loss column, both teams stood to lose much more.

Ending the matchup on the bottom sent either team home for the year, while a win meant a trip to the state tournament.

Not wanting to miss the big dance for the fourth straight season, Meeks and company punched their ticket in the first half of play.

With a defense forcing Cameron into a 2 of 18 shooting performance from the field in the second quarter, then generating 20 points off 9 Dragon turnovers in the same period, they rumbled on to Charleston following a 66-31 Region I co-final victory on their home floor.

When asked what the Blue Devil coach changed between the second and third games, he replied in amusement.

“I will be honest. This is what was supposed to happen the first few times, we just never did it. The way we are starting to play defense is the way we used to play defense here at St. Marys and I actually coached less (tonight) and it worked.”

Josey Moore (19 points) and Lara Fetty (14 points) took advantage of their group’s prowess on D in the period before halftime. By combining for half of the points, each put more pressure on a Dragon team who watched a 15-8 deficit after one period expand into a 37-16 half-time score.

Cameron never recovered after the trip to the locker room.

“My girls, it seemed like they played scared tonight and I don’t know if it was the chance to go to Charleston or them not being up and moving around. We didn’t shoot the ball very well and were just out of our comfort zone,” said Cameron coach Holly Pettite.

Lili Neely led the Dragons with 13 points and seven boards, but no other teammate finished in double digits. Her scoring total read as only the second double-digit effort overall on the evening for the visitors. Point totals in the first, second and final periods read eight, eight and five.

“We are being aggressive again now and that is something we can build on for the future,” said Meeks, who also saw his group hit 20 of 25 shots at the free-throw line.

All but three of their charity stripe makes aided in the first-half pull away. After Cameron climbed to within 6-5 on Aubree Cain-Loy’s triple with little over half the opening period gone, St. Marys used six trips to the line as part of an 10-2 run. When coupled with their visitor’s inability to hit shots, this weapon created a comfortable margin for the Blue Devils.

Five points was as close as the Dragons came to the lead the rest of the evening. Any comeback attempts also ended after a 3 for 16 shooting performance over the final 16 minutes.

The extra rebounding chances then allowed St. Marys chances to expand the lead. Zoe Davis’ kiss-of-the-glass bucket pushed the lead to 24, 50-26, with a little under a minute left in the third period. Millie Kehrer’s down low shot off the glass then raised the advantage to 29 one minute into the final quarter.

When asked the plan for Charleston, Fetty responded succinctly and with a goal in mind. “I want to get a win for sure, but just the experience of going down there is worth it,” she said.

The valuable time on the Coliseum and Convention Center floor may be the only thing available to the Blue Devils. Shannon Lewis’ top-seeded Huntington St. Joe team awaits in a 5:30 p.m. match-up next Thursday.