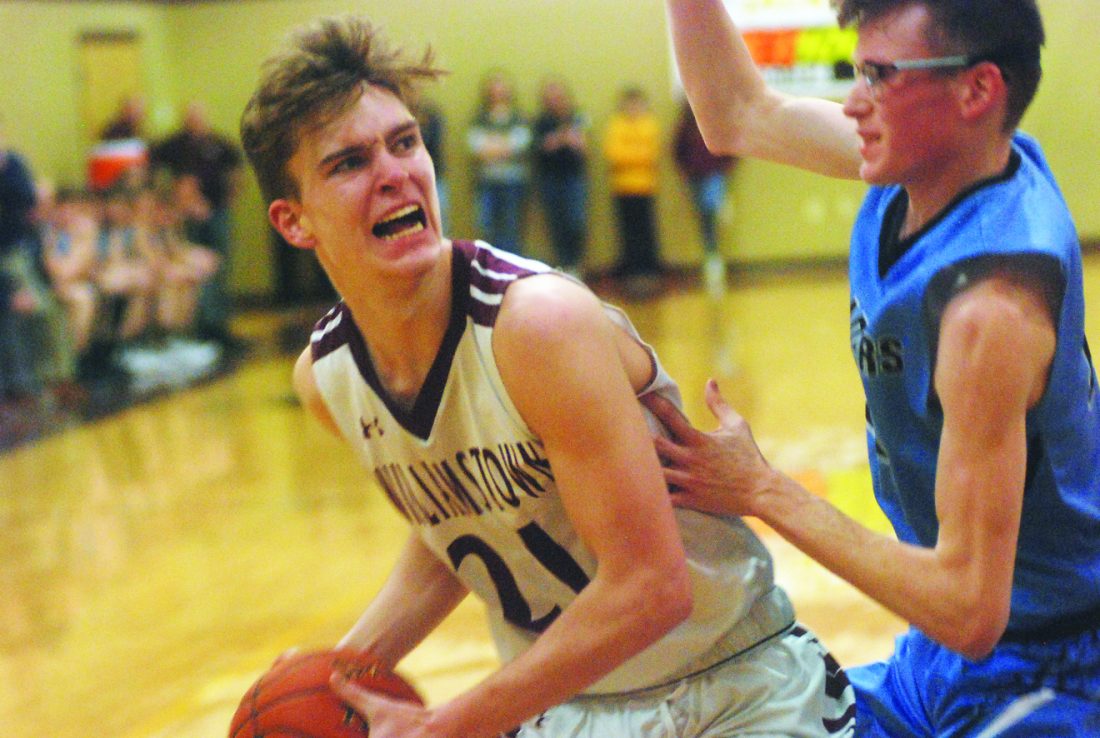 WILLIAMSTOWN — It took a second-half surge, but Williamstown pulled away at home to win the Class A Region IV, Section I championship over visiting Parkersburg Catholic in a 64-42 win on Friday night. The result sets the two teams on different paths in order to get to the state tournament in Charleston.

On Wednesday at 7 p.m., Williamstown remains at home when Van comes to town in a regional co-final. Parkersburg Catholic hits the road at the same time and date against Tug Valley. The road to getting where WHS wanted was not an easy one, as the 23-1 ‘Jackets held to a 26-24 lead at the half. Eli Inman led all scorers with 17 points, and he put back a miss he had from close range at the buzzer to give the maroon and gold the slim advantage.

While the first half was full of physical play and key defensive stops, the second half played into Williamstown’s hands. The change in tempo allowed the Yellowjackets to take aim from around the perimeter, as Catholic (15-9) could not hold WHS’s shooters back. Inman and Xavier Caruthers (13 points) made a home from beyond the arc, and they hit a combined five 3-pointers in the third to give their team a 45-30 lead heading into the final eight minutes of action. As the nets were being cut down, Inman talked about his 3-point barrage with Caruthers and how it felt to down PCHS on the biggest of sectional stages.

“It feels great. This is exciting to beat them three times this year,” he said. “It feels fun to be connecting with your teammates. This is a great feeling.”

In total, Parkersburg Catholic was outscored 38-18 in the second half. Patrick Copen led the Crusaders with 14 points in the loss, and Xavier Collie finished right behind him with 10. A large part of PCHS’s struggle from the inside was due to defense from Colten Luther. He tallied 16 points and disrupted shot attempts throughout the contest. Head coach Scott Sauro talked about that defensive pressure and what it took to widen the gap in the second half.

“We made some perimeter shots, and we did a better job, defensively. In the first half, we gave up 24 points, but eight to 10 of those were due to offensive rebounds,” he said. “I thought we rebounded the ball better in the second half, and we held them to 18 points in the second half. That was really the difference. It was a good team win.”

On the other end of this result, PCHS head coach Rob Strcula prepares his squad for the long trip down south.

“In the first half, we did what we wanted to do, defensively. We wanted to come out and almost hug their defenders, and force them to take more 2s than 3s,” he said. “In the second half, they got some open looks, and we didn’t close out. You can’t take anything away from our guys. Our guys just played their absolute butts off. We’ve got to go out and start watching film.”

Another double-digit scorer for Williamstown was Sam Cremeans. His 13 points helped the cause, as he joined Inman, Luther and Cauthers as an effective shooter. Cremeans was excited to get the job done on Friday, as he is one win away from taking his first trip to Charleston for the state tournament.

“I’ve always had that sense of wanting to win,” he said. “I have a great group of guys around me who wanted to win. That was our main goal throughout the season. I think a big part of (the win) was driving around defenders and kicking it out to guys shooting the 3. I think Eli (Inman) had a few big 3s, and Xavier Caruthers hit some big 3s. That’s really what got us jump-started.”