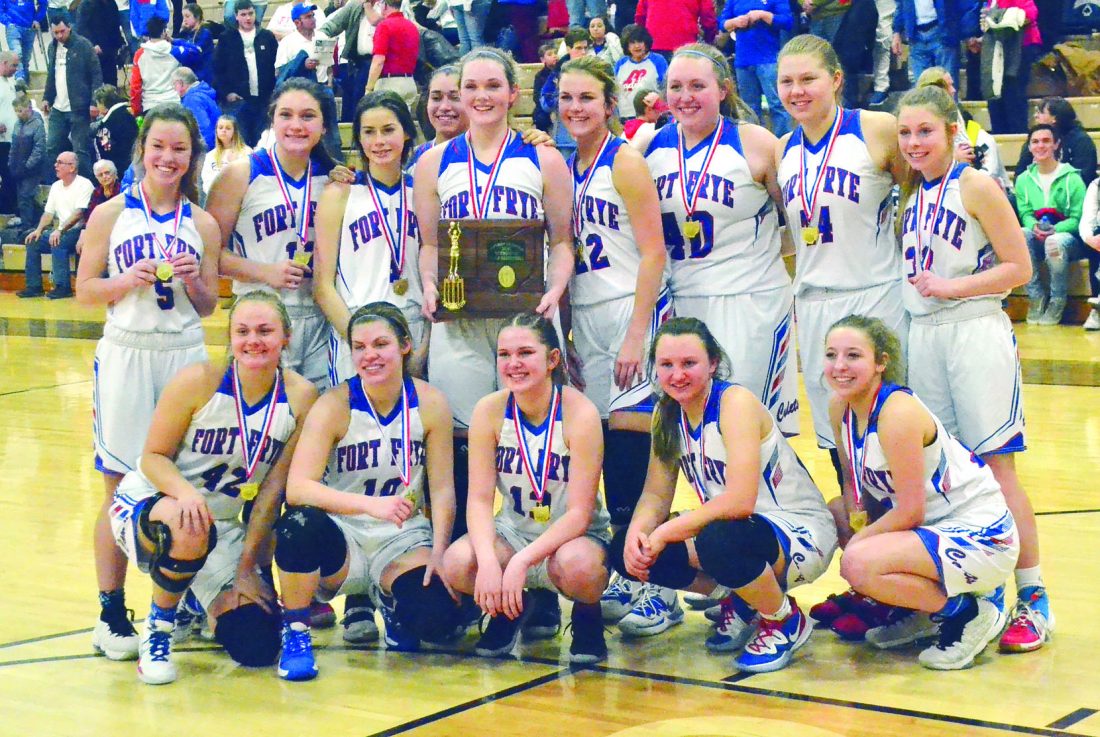 BYESVILLE — Hannah Archer tossed in a game-high 17 points to lead the Fort Frye Cadets to a 39-24 win Saturday afternoon over the Monroe Central Seminoles in the Division IV district championship game at Meadowbrook High School.

On a day where they didn’t shoot the ball well at all, the Cadet defense rose to the occasion once again and keyed the victory to allow them to advance to the Sweet 16 for the first time in four years.

For the fourth straight postseason game, the stingy Cadet defense held their opponent to 30 points or less and despite struggling, the offense did enough to secure the 15-point win.

“We were struggling and we were even missing layups and free throws,” said Fort Frye head coach Dan Liedtke. “The way our defense was playing if we were making our shots we could have just kept going but we had to hold the ball some to keep control of this game.”

After a win Tuesday night over Beallsville in which they knocked down 10 3-pointers, the Cadets looked like they might offer a repeat performance as they jumped out to an early 15-2 lead at the end of the first quarter keyed by six points by Archer and four by fellow sophomore Kenzie Dalton.

From that point on it would be a struggle offensively for the Cadets as they were out-pointed 7-5 by the ‘Noles to take a 20-9 lead into the halftime break.

Monroe put together its best stretch of basketball early in the third as it went on a 6-1 run to cut the lead to five. Archer knocked down her third triple of the game to push the lead back to nine and later in the quarter connected once again to extend the Cadet lead back to double-digits.

The Seminoles managed to get the lead back to 10 with three minutes to play on back-to-back baskets by Trista Morris but could get no closer as the Cadets won their 15th straight game and punched their ticket to regional play beginning Thursday in Pickerington.

Dalton felt that getting out to the big lead was a key in the win.

“That was really big for us because once we get a big lead it seems like we are able to keep the momentum going,” said Dalton, who scored four points and led her team in rebounds with eight and assists and steals with four each.

Archer was pleased that her team was able to meet one of the goals they set before the season and hopes the Cadets can keep things rolling.

“It feels great and I don’t think we’ve done it since 2015,” said Archer of the district championship. “We all work together really well and have good chemistry and we just want to keep winning.”

Monroe Central, whose season comes to a close with a fine 19-7 record, was led by Haylyn Hiles with seven points.

Liedtke was pleased with his team’s effort but knows they will have to play even better going forward to continue to advance in the tournament.

“Overall our game plan worked pretty well, we just needed to make some more layups and free throws,” said Liedtke, whose team shot 34% (13-38) from the floor while converting just 8-of-17 freebies. “We were missing them and we’ve got to make them from here on out.”

Cadet guard Olivia Schneider was thrilled with the win but feels this team is capable of making some noise in the regionals.

“It feels amazing because last year we got stopped at this point,” said Schneider, who did a great job defensively on Monroe Central guard Kalista Friday. “Now we just have to keep it going.”