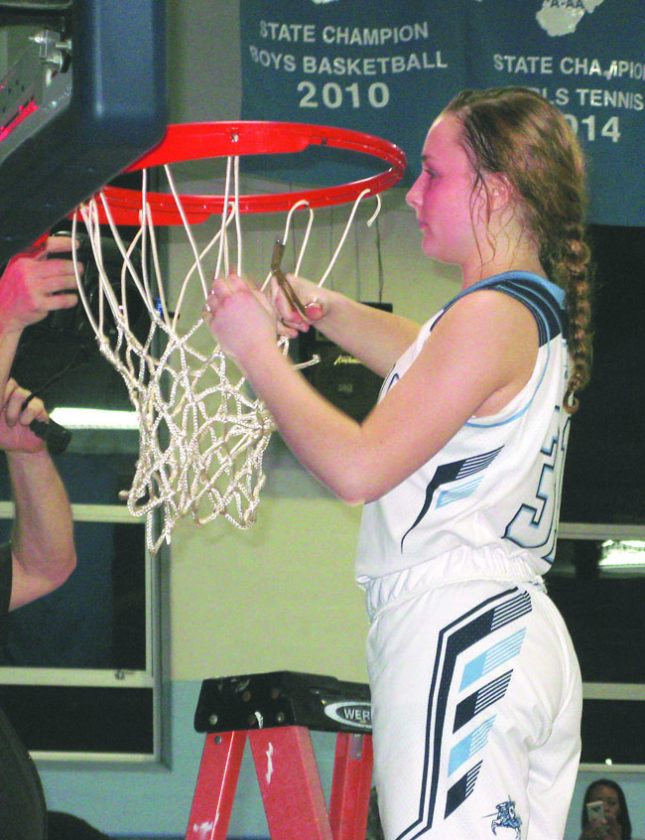 PARKERSBURG — Leslie Huffman went for a career-high 35 points and added seven steals and five rebounds here Wednesday night to help lead Parkersburg Catholic back to the state tournament after the Crusaderettes handed Tug Valley a 69-56 setback in a Class A, Region IV co-final.

Tug Valley, which never recovered from going down 13-0, finished the year at 18-8 for head coach Clyde Farley, who watched Kaylea Baisden (21), Makayla May (11) and Alyssa Newsome (10) each score in double figures. The Panthers, who trailed 44-19 at intermission and scored the most points versus PCHS this year, cut it to 11 with 1:19 remaining, but couldn’t overcome 30 turnovers.

“It was the best thing that could’ve happened for us,” said PCHS head coach Marty Vierheller of his team having to play a hard 32 minutes. “We had some breakdowns on the defensive end that were uncharacteristic and some uncharacteristic turnovers.

“You are not going up against a team that’s going to roll over and die. That team can play.”

Parkersburg Catholic will carry a 25-0 record into next Thursday’s Class A state quarterfinal in Charleston. The Crusaderettes, who got 19 points from Madeline Huffman along with seven counters and six steals by Aaliyah Brunny, have the No. 2 seed and will face seventh-seeded Tucker County at 1 p.m.

“They definitely never gave up,” said the sophomore Huffman. “I guess it was kind of the thought that it was my sister’s last game and the last time I’ll play with her here at Catholic. You got to make it a memorable time.

“They played hard the whole time. I’d say their coach had a solid game plan coming in, but we got ahead in the first half and maybe got ahead of ourselves a little bit, but we stuck with it.”

Madeline Huffman’s steal and assist to younger sister Leslie for a layup just 58 ticks into the affair gave the hosts the lead for good. Leslie Huffman then had a steal and assisted on Madeline’s lay-in. Another steal by Leslie Huffman resulted in a Madison Ross hoop and coach Farley called timeout down 6-0 at 3:53 of the first. At that point, the Panthers were 0 of 2 from the field and had seven turnovers.

A Madeline Huffman 3, two Brunny foul shots and then a steal and lay-in by Leslie Huffman, which was Tug Valley’s 10th turnover, made it 13-0 at the 2:34 mark. Baisden’s deep 3 finally got the Panthers on the board with 2:18 left, but PCHS led 24-7 after one when Leslie Huffman’s corner 3 hit the iron and then dropped in with about two seconds remaining.

Tug Valley, which had 21 first-half turnovers and finished the game 10 of 22 from deep, trailed 39-18 with 50 seconds to go before halftime after another Baisden 3. However, Jenna Boice answered with a triple of her own just 10 seconds later.

Despite trailing 52-36 entering the fourth, the Panthers didn’t quit and were down 57-43 with 4:35 to go after Brooklyn Evans’ steal and layup, but Leslie Huffman countered that 13 seconds later with a three-point play.

“It’s a little sentimental thinking about it, this being my last home game,” said lone PCHS senior Madeline Huffman. “Obviously, it was a little messy but we got it done and that’s all that matters. I’m just looking forward to Charleston and getting it done down there.”

Parkersburg Catholic had 19 turnovers of its own, but finished 23 of 27 from the foul line. Leslie Huffman canned 12 of 13 and Brunny was 7 of 8.

“It’s amazing to think that in the last three years she’s lost one game on this floor,” coach Vierheller said of his senior. “We shot free throws great.

“Leslie had a fantastic game. She’s glue out there. She’s money. I’m really proud of her and the rest of the girls.”

May grabbed a game-high eight rebounds. Tug Valley, which doesn’t have a senior on its roster, also got four steals from Audrey Evans.