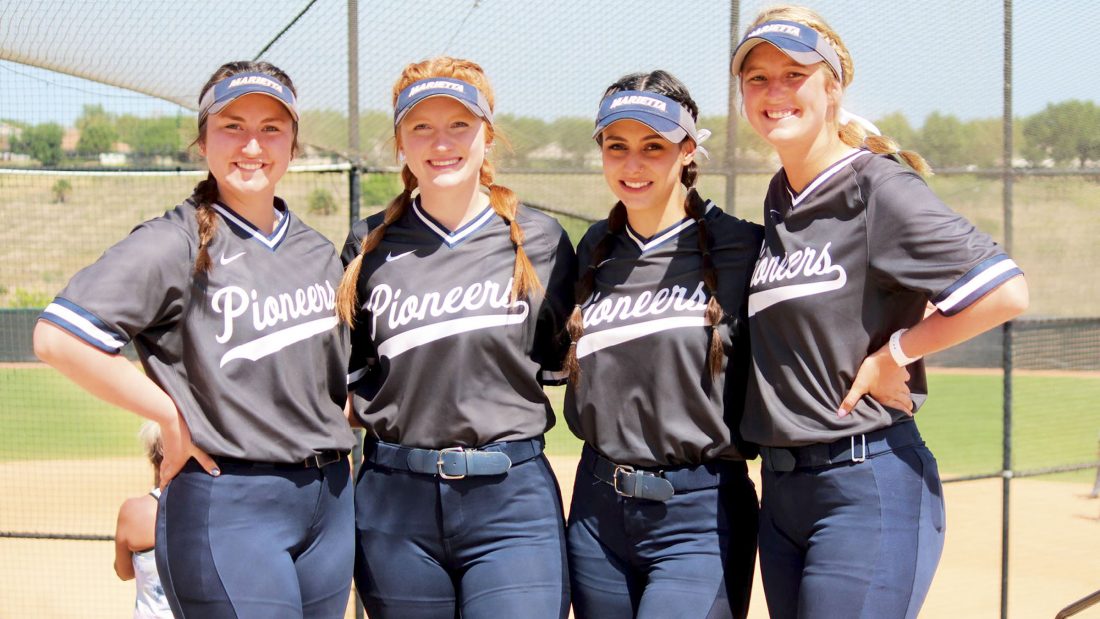 Photo courtesy of Marietta College Marietta College seniors Erin Miller, Lauren Rockocy, Maicy Kirk and Alyssa Cook take time away from softball to make a memory during the Pioneer team’s trip to Clemont, Fla. COVID-19 forced an early end to the season and the team will miss their final year players.

After the Pioneer softball team took two on its last day in Clermont, Fla., March 13, it got the “word” officially from its boss.

“You know, we had a feeling the stoppage of all play (due to the coronavirus COVID-19 crisis) was coming, but we were still kind of caught off guard when it did, because we were hoping — hoping it wasn’t going to happen,” recalled second-year MC skipper Jenn Castle.

“When I told them after winning a doubleheader, they understood,” the coach continued. “But it was very emotional. Everybody was crying and hugging each other.

“I felt fortunate that at least they heard it from me, so that we and the families there could comfort each other as a team.”

As a team, Marietta, tied for sixth place (with Wilmington College) in the first Ohio Athletic Conference Preseason Poll on Feb. 11, enjoyed a very successful southern trip to the Sunshine State, posting a 7-3 record, including what turned out to be a season-ending four-game winning streak.

A year ago in Castle’s “rookie” season at the helm, the Pioneers finished the campaign with a solid 18-18 overall record (7-11 OAC mark).

“The success didn’t surprise me,” Castle said. “Everything was coming together — the pitching, hitting, and defense.

“It’s just so unfortunate and disappointing for the players, who busted their tails to just have it end.”

“After we beat Montclair (1-0) and Wooster (4-1) on the last day in Florida, I told the team that we won because of these seniors,” Castle said.

During the twinbill, Castle batted the foursome at the top of the order with Kirk leading off, then Cook, followed by Rockocy, and finally Miller in the clean-up spot.

“That was purposely done,” Castle said, “to give them as many at-bats as possible.”

In the opener against Montclair, Cook singled home Kirk with the only run of the contest in the bottom of the seventh inning.

Rockocy and Miller each had an RBI hit in the nightcap.

“We’re going to miss those four terribly,” Castle said. “And, I was so proud of the whole team afterwards.

“Montclair and Wooster were two of the best teams we played in Florida, and we beat them.”

While Kirk (biology major), Cook (early childhood education), Rockocy (health science), and Miller (athletic training) could conceivably return to the diamond in the spring of 2021 if they opted to do so due to the NCAA granting spring student-athletes extra eligibility, Castle believed it was unlikely.

“That was really nice of the NCAA to grant the waiver,” the coach added. “But I think after graduation, Maicy, Lauren, and Erin are thinking about grad school, and Alyssa, I believe, will be interviewing for a job.”

As for the future of Marietta College softball, Castle is very optimistic and expecting a nice nucleus of returnees.

“Yes, we’ll be losing four pretty good softball players,” she said. “So, we’ll have some holes to fill.

All three pitchers — Maddi Liston, Hannah Richardson, and Airyanna Mauer — who hurled and helped defeat Montclair and Wooster are expected to return.

Liston tossed a one-hitter against Montclair. Richardson is a 2019 second-team All-OAC honoree, and Mauer got the save against Wooster.

Castle was assisted by Brianna Finck.

“With what has gone on this spring, I’m looking for this team to play with a lot of passion next season,” Castle said.