Morgan pulls away from Fort Frye in district semi 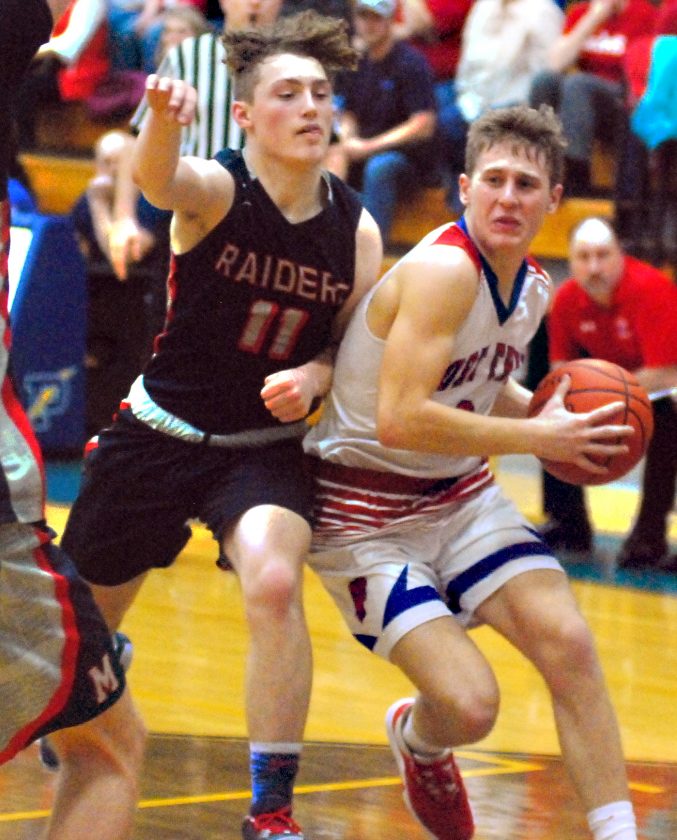 DUNCAN FALLS, Ohio — As the buzzer at the end of the third quarter sounded, Carver Myers watched his pull-up 3-pointer roll around the rim and back out.

“I thought it was going in and then it spun out, and I was like, ‘Dang it,'” said the Morgan High junior.

But then, the ball hung on the rim and spun back down the net, sending Raiders fans into a frenzy as Morgan took a 44-29 lead after three en route to a 63-44 victory over Fort Frye in Tuesday’s Division III district final at Philo High School.

Fort Frye (20-4) was within six, 35-29, midway through the third, but Morgan (16-10) closed the period on a 9-0 run, capped by Myers’ trifecta at the horn, and scored the first three points of the fourth quarter to take control.

“Generally our shot selection was on point tonight,” Justice said. “As we always talk about, when we win the rebounding edge we usually win the game. I thought we rebounded the ball really well.”

Myers finished with 15 points and eight rebounds, while teammate Carter Mayle led the way with 18 points and nine boards.

“The Carter Mayle we saw tonight was the Carter Mayle I saw all summer,” Justice said. “He was unstoppable during the summer. He played huge minutes tonight.”

Also in double figures for Morgan was Jason Wells with 12, while Gabe Altier chipped in nine.

Fort Frye was led by Zane Wallace’s 16 points, 12 coming on four 3-pointers. Kelton Fogle, who missed the sectional final with an injury, battled his way to 12 points while Brady Schilling netted nine.

“We let some of their guys get some open outside shots,” said Fort Frye head coach Eric Henniger. “I didn’t think we played well defensively and we gave up some offensive rebounds.”

Myers’ putback with a minute left in the first quarter put Morgan up five, 13-8. He then recorded back-to-back steals, dishing to Wells for a layup on the first and then converting the second into a 3 to put his team up 18-8.

Buckets by Caden Fryman and Schilling got the Cadets back within six to start the second quarter. Morgan stretched it back to 10, 24-14, on treys by Altier and Gabe Edwards, but Wallace scored five straight points to cut it to five. Morgan went into halftime up 30-23.

At the 4:40 mark in the third, Brian Adkins’ 3-pointer trimmed Morgan’s lead to 32-27. On the other end, Altier missed a 3 but Wells got the carom, put it back up and drew contact, converting the and-one and extending the lead back to eight.

Wallace got a steal and a layup with 3:28 left in the third to make it 35-29, Josh Wells answered with a 3, Mayle got a putback bucket and Altier made a free-throw to make it 41-29, Morgan’s largest lead to that point.

With three seconds left, Fort Frye was called for an illegal screen which led to Henniger getting a technical foul. Myers missed both foul shots but made the crazy 3 at the buzzer to give his team all the momentum.

“That was wild,” Myers said.

Fort Frye battled in the fourth, but could only get as close as 11 with 2:15 remaining before Morgan iced the game at the foul line.

“(Fort Frye’s) a great team,” Justice said. “The boys take pride in their defense and that’s really where — if we play great defense and we rebound, we’re really hard to handle.”

The Cadets’ season comes to an end, but only after they overcame much adversity to win 20 games, a sectional title and an Ohio Valley Athletic Conference 3A championship.

“I’ve been saying that this has been the toughest season I’ve had to coach,” Henniger said. “It wasn’t just one injury, it was injury after injury, and our kids responded every time. I’m very proud of them.”

The Raiders will play for a district title for the first time since 2016. The Generals defeated Tuscarawas Valley 53-38 Tuesday, setting up Friday’s matchup at Muskingum University.