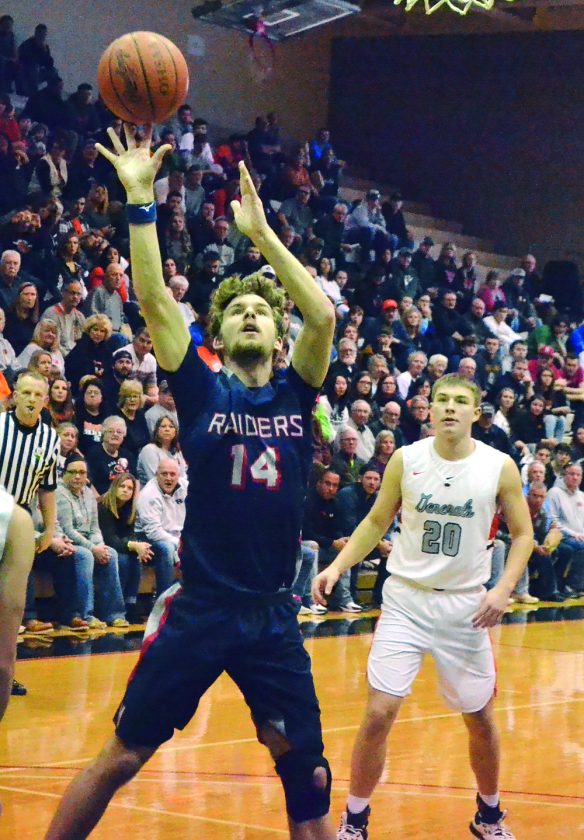 Photo by Mike Morrison Morgan’s Carver Myers (14) goes up for a basket during a high school boys basketball district final against Ridgewood Friday at Muskingum University in New Concord.

NEW CONCORD — Morgan needed to take advantage of every single opportunity they were given to have any hope at all of upsetting top-seeded Ridgewood Friday night in the Division III District championship game at Muskingum College.

Unfortunately for the Raiders, an inconsistent night shooting the basketball spelled their doom as they dropped a 65-48 decision to the Generals to end their magical run in the postseason.

“We came in and played a mirror image of ourselves and at the end of the day one team hit shots and one team didn’t,” said Morgan head coach Rob Justice. “We got every single shot we wanted to and were only down by six at halftime but we shot the ball bad and they took advantage of our turnovers.”

The Raiders fell behind 12-9 at the end of one quarter and allowed the Generals to double their lead in the second to trail by six at the break.

Ridgewood got off to a great start in the second half as they got a quick three from Trey Stoffer followed by an inside bucket by Connor Kunze to take their first double-digit lead of the night at 27-16.

Later in the third a 3-pointer by Koleten Smith increased the lead to 14 before a two-pointer by Dalton Patterson gave the Generals a 16-point lead heading to the final eight minutes of play.

Smith’s deuce to open the final period gave Ridgewood an 18-point lead and the Raiders appeared to be down for the count.

The Raiders could well have put up the white flag and headed back to McConnelville but that would be anything but the case as they went on a 9-0 run to cut the lead to eight with less than five minutes to play.

A Carver Myers basket got the run started and junior Gabe Altiers followed with a three to trim the lead to a dozen.

Myers was a perfect six-for-six from the charity stripe including a pair to trim the lead to 10 and then came up with a huge steal that ended up in a Gabe Edwards rebound put-back to pull the Raiders to within eight 44-36 with five minutes left on the clock.

Unfortunately the Raider run would stop right there as the Generals out-pointed them 21-12 the rest of the way to punch their ticket to the Sweet Sixteen in the state.

Smith led the way for the winners with a game-high 23 points while Trey Stoffer added 14.

Myers continued his red-hot postseason for MHS by posting a double-double with 20 points and 12 rebounds while Altier also reached double figures with 12.

Both teams were outstanding at the charity stripe as Ridgewood knocked down 16-of-19 only to be out-done percentage wise by the Raiders (13-15).

The Generals improved to 24-2 on the season while the Raiders bow out with a 17-10 record after a great run in the tournament.

“We gave it everything we had and we battled until the last second,” said Justice. “I’m super proud of my boys and how we finished the year.”

The game will be the final one for Morgan seniors Josh Wells, Sheridan Gillespie and Gabe Edwards.

“Those kids were really the heart of this team and they are super unselfish,” said Justice. “They are all-effort kids and I felt like they played a wonderful game today.”