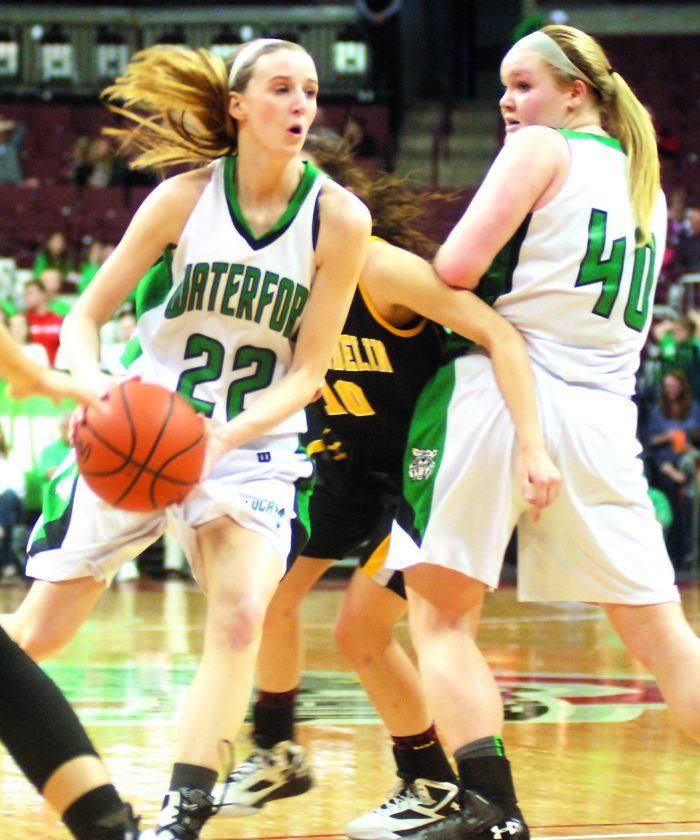 WATERFORD — When Megan Ball and Walsh University played at Ohio Valley University on January 18, the color green was prevalent in the Snyder Activity Center bleachers.

“That’s one of the best feelings,” said Ball, who starred at Waterford High, about a half-hour or so drive from Vienna, W.Va. “The community of Waterford has a big fan base, and supported us and was at every game. It’s one of the memories I’ll always cherish.”

Ball is one of two Wildcat cagers still competing on the hardwood. Alli Kern is the other, at Ohio Dominican University. Both are sophomores.

Kern and the Panthers were at OVU Jan. 30.

“There was green everywhere,” Kern said. “The fans and community have always been super special.”

About a month or so before in December, Ohio Dominican hosted Walsh in a women’s basketball game, and guess who guarded each other?

When Ball and Kern were Waterford sophomores four short years ago, the duo and their Wildcat teammates were state champions, beating Fostoria St. Wendelin, 29-27, in the title tilt at Value City Arena in Columbus. Ball scored the game-winner on a drive in the lane.

“From a personal standpoint, I’ll always remember that,” Ball said. “But winning at Waterford was always a team effort all the way.”

Added Kern, “When we won at state that year, it was such an exciting time. It’s a big part of my life, and something I’ll never forget.”

“The things they have provided us, our community, our school, and themselves with probably never will be duplicated,” said WHS head coach Jerry Close. “It’s a heckuva group of seniors and I’m proud of everything they’ve accomplished.”

During that four-year run, Kern was very durable, playing in every single game.

“Honestly, I was very lucky that I never got injured,” she said. “I have to give a lot of credit to my coaches and teammates.”

That four-year state tournament run had its origins in 2015 with the Wildcats finishing runners-up. It was the first time Waterford ever advanced to a state Final 4 in any sport.

“That was our first year of getting there, and Taylor Hilverding, (assistant coach) Todd’s daughter, was the only senior on the team,” recalled Close. “She was the leader.”

The following year with virtually everybody back, including seniors’ Dani Drayer, Regan Porter, Mariah Starkey, and Erin Roush, posted a school-best 28-1 record and hung a championship banner in the Harry Cooper Annex gym.

“That group of players wanted to get back to state and had the will to win it all,” Close said.

Both Drayer and Porter finished their careers as 1,000 points-plus scorers. After graduation, Drayer played a couple of years at Malone University before continuing her academic studies at Marietta College.

In 2017, Jillian McCutcheon was the lone senior on the roster, and the Wildcats lost her early on to a torn ACL. Even so, they persevered and made it to state for the third straight winter, where they finished runners-up to Berlin Hiland.

“Hayley Duff really stepped up for us in the playoffs and in the Final 4,” Close said.

Not too surprisingly, with Ball, Kern, the Duff sisters, and others returning the following season, Waterford was favored to get to state a fourth consecutive year.

“Not too many people realize that there was pressure on the girls to return to state that year,” Close said. “I mean, everybody talked about us getting back to the Final 4.”

Well, as it turned, Waterford didn’t disappoint. But at state, the Wildcats had a 26-game winning streak snapped when they bowed out in the semis to Minster.

After the season, WHS had a reunion of sorts when four of the players — Hayley Duff, Hannah Duff, Ball, and Kern — competed in the 17th annual Battle Against Cystic Fibrosis (BACF) All-State Basketball game at Parkersburg South’s Rod Oldham Athletic Center.

Coaching the all-stars was Close.

“They know how to play,” the Waterford boss said. “They’re easy to coach.”

Since 2018, Waterford has followed up with two winning campaigns but not advanced to state.

“We went 20-5 with Rachel (Adams) in 2019,” Close said. “And, this past season, we were just riddled with injuries but still won our sectional.”

Meanwhile, Kern and Ball have recently completed their second season at the next level.

This past season, the 5-foot-9 Kern, a biology major at ODU, emerged as a starter, averaging 6.1 points per game and team-high 8.7 rebounds per game. Ohio Dominican finished the campaign 17-12.

“From high school to the college game, it’s such a transition,” Kern said. “Rebounding is a part of my game, and I just try to contribute in any way I can for the team.”

The 5-11 Ball, an exercise science major, also enjoyed a solid sophomore season, averaging 8 ppg and 3.6 rpg. She started in 16 games.

As a team, Walsh was 28-2 overall and 18-0 in the G-MAC. The No. 3 Cavaliers were scheduled to play No. 6 Lewis in an NCAA Midwest Regional first round game March 13 before all play was halted due to the coronavirus Covid-19 pandemic crisis.

“We’d won our conference two years in a row, and had a pretty special team,” Ball said. “But sadly, the season was cut short and we’re done.”

Needless to say, Ball knows a little something about playing on a “special team.”

“Memories of Waterford pop up everywhere,” she said. “We’re all still very close and talk to each other all the time.”

Kern agreed and added, “We’ll always be best of friends. We knew as a team what we wanted every year, and we worked for it.”