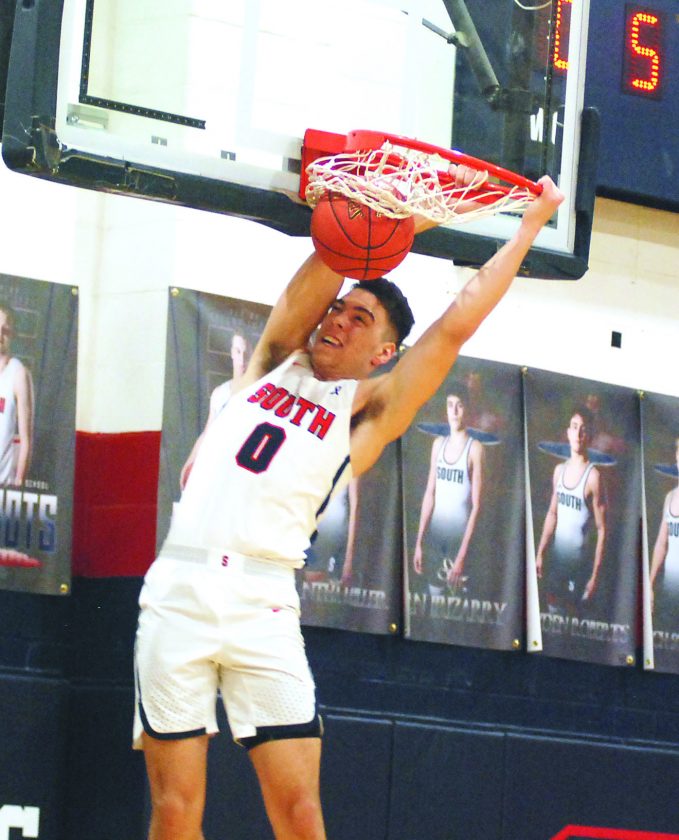 PARKERSBURG — Parkersburg South’s Malaki Sylvia isn’t quite ready to have his prep career end, but he is looking forward to his future at Marietta College.

The Patriot senior, who shot 55% from the field and averaged 18.8 points, 7.4 rebounds, 1.5 steals and 1.4 assists, is anxious to play for the Pioneers of head man Jon VanderWal.

“Their family and winning culture over there is just something I’ve never really experienced when it comes to the recruiting process,” Sylvia said of one of the reasons he opted to play hoops at MC. “Me and coach VanderWal get along great.

“I can’t wait to play underneath him. I think he brings the best out of his players, whether in the classroom or on the court. I feel like at Marietta you are held to a higher standard, not only because you are an athlete but Marietta is a very good academic school.”

Sylvia, who helped the Patriots to a 16-8 record this season and a Class AAA Region IV co-final victory against Spring Valley, said he’s leaning toward a major in business and finance or perhaps sports management.

“I went on a visit to West Virginia Wesleyan with Zach Seese. I was thinking about teaming up there,” Sylvia said.

“A lot of schools D2-wise reached out to me but never offered. I don’t know why. I feel like I’m over looked a lot.

“It’s been like that my entire four years of high school. I feel like I was leaning toward Marietta since my junior year. I had a lot of coaches reach out to me UC (Charleston), Shepherd, Wesleyan, W.Va. State, a couple other D3s.”

Once at Marietta College, Sylvia figures he’ll probably play as a small or power forward.

He’s hoping to earn minutes as a freshman, but understands that’s not going to be easy.

“That’s the plan,” he said. “I think with my work ethic that’s going to separate me a little bit. Of course, I’m not promised playing time. I’m going to go in and work my tail off like I’m known to be and play my game and I think when it’s all said and done hopefully I’ll have some pretty good minutes.

“I think once I put some more weight on muscle-wise and get used to the college system he (VanderWal) kind of hinted (it would be) more of a hybrid type thing, maybe a three or a four. Tim Kreeger is their incoming senior. I’m impressed by him. He’s a pretty good five.”

Stressed to him by his parents since he was young, Sylvia completely understands the role of a student-athlete.

“My parents have always been really hard on me with academics. Student comes first,” he said. “I’ll do my homework and study because growing up that’s what comes first.

“You are a student before an athlete. It’s a privilege to be an athlete and be a basketball player. You have to take care of business first.”

Unfortunately for Sylvia, Seese and the Patriots’ other six seniors of first-year head coach Brett Rector, the window is closing on any chance of actually having this year’s state basketball tournament.

“Mostly playing at City Park,” Sylvia said of all the free time. “I’m just ready for all of this to be over. I’m ready to have a ball in my hand 24-7. I’m not used to the gym is closed or you can’t come in and shoot.

“I’m the type of guy, I’m social, but I’d rather be in the gym working than at a party. It’s kind of hard with all this coronavirus stuff going on not being able to be in a gym.”