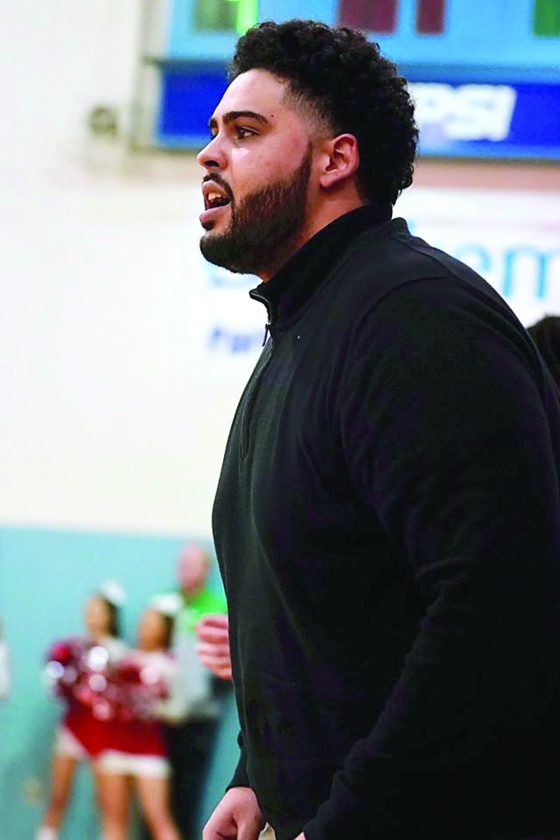 J.j. Martin has earned his share of basketball awards over the years.

But being named recently the Mountain State Athletic Conference (MSAC) Coach of the Year in his first season at the Cabell Midland Knights boys basketball helm…well, that’s pretty special.

“I also want to give a lot of credit to my assistant coaches Christina Schmidt and Rodney May. We work well together.”

Martin and his staff led Cabell Midland to a 21-4 record, including both a Class AAA sectional and regional championship. The Knights were scheduled to play Hedgesville High in a state tournament opening-round game last Thursday (March 19) at the Charleston Civic Center Coliseum but the contest and the entire event were halted due to the coronavirus COVID-19 pandemic crisis.

“It doesn’t look like the tournament’s going to happen,” Martin said. “It’s been really tough on the kids, who have been looking for answers.

“But, we have no seniors on the team, and everybody’s expected back next season.”

When Martin succeeded his former coach and mentor Rick Chaffin, CM had graduated four starters from the 2018-19 squad that had advanced to the state semis.

“I think a lot of people thought that we weren’t going to be very good,” said Martin, who assisted Chaffin two years before being promoted. “But I’m a believer that if you have good players and good plays — and mix it a little bit — you’re going to be successful. Our kids were mentally tough and really went after it.”

Just like Martin did during his basketball playing days at Huntington High, Marietta College, and later in the pros for the West Michigan Lake Hawks of the ABA (American Basketball Association).

“When I was in the 10th grade at Huntington, I was 6-foot-2, 280 pounds,” recalled Martin, laughing. “And, yes, I was a football lineman. I played baseball and basketball (for Lloyd McGuffin, who is now a Cabell Midland principal) back then, too. I was on a state championship team with O.J. Mayo and Patrick Patterson (Both went on to play in the NBA.).

“Well, anyways, I decided I wanted to focus on basketball, so from my sophomore year to my junior year, I lost 100 pounds.”

The weight loss paid off huge dividends as the 6-4 Martin blossomed into a standout prep basketball player after Mayo and Patterson graduated in 2007.

“I was being recruited, and of course, I wanted to compete at the D1 level,” Martin said. “I was actually thinking of walking on at Marshall.”

Thing is, Marietta College was also looking at Martin.

“We didn’t start recruiting J.j. until late into his senior year,” said 13th-year MC head coach Jon VanderWal. “We didn’t know a ton about him when we landed him, and he didn’t play at all his freshman season.”

Martin said that after about a 30-minute phone conversation with VanderWal and a visit to the Washington County campus, he was sold on the Pioneers.

“I just loved it there,” Martin said.

But during his frosh year, he wasn’t exactly thrilled being a Pioneer benchwarmer.

“I have to credit assistant coach Andy Bucheit, now the Heidelberg University head coach, for helping me get through that first season,” Martin said.

In Martin’s second year as an MC cager…things changed for the better.

“I’m really proud of J.j.,” VanderWal said. “He is the perfect example of a self-made player. He stayed the course and worked really hard in the offseason.

“We were pleasantly surprised with how much he improved the summer leading into his sophomore year. We were not expecting him to be in our rotation but his hard work paid off and he ultimately was rewarded with significant playing time his sophomore year.”

During Martin’s junior year, he played in only 14 games due to a thumb injury, but was the team’s second leading scorer, averaging 10.8 points per game.

Then, Martin capped his senior campaign at MC in a blaze of glory, averaging 16.9 ppg and 7.1 rebounds per game. Along the way, he helped lead the Pioneers to a 20-8 mark, the OAC Tournament Championship, and a second berth in three years in the NCAA Division III Tournament.

“He continued to work and really busted onto the scene, and had a great junior and senior year,” VanderWal said. “J.j. is a great Marietta College success story.

It was actually at one of VanderWal’s summer basketball camps during his Pioneer playing days that Martin first entertained thoughts of someday becoming a coach.

“Of course, I wanted to continue playing after I graduated — and I did for a couple of years in the ABA,” said Martin, who graduated from MC with a degree in broadcasting/media communications. “But at Coach VanderWal’s camp, that was when I realized I wanted to coach. I just loved working with the kids.”

After Marietta, Martin had a tryout in Canada before sticking with the West Michigan Lake Hawks in Muskegon. One of his teammates was former MC Pioneer Jacob “J.O.” Owens.

“It was a great experience,” Martin said.

As the Cabell Midland boss, Martin said that the Knights employed some of the same plays and schemes done at Marietta College.

“We used a lot of their stuff to prepare for games,” Martin added. “And I’ve got to give a lot of the credit to Jon VanderWal.”