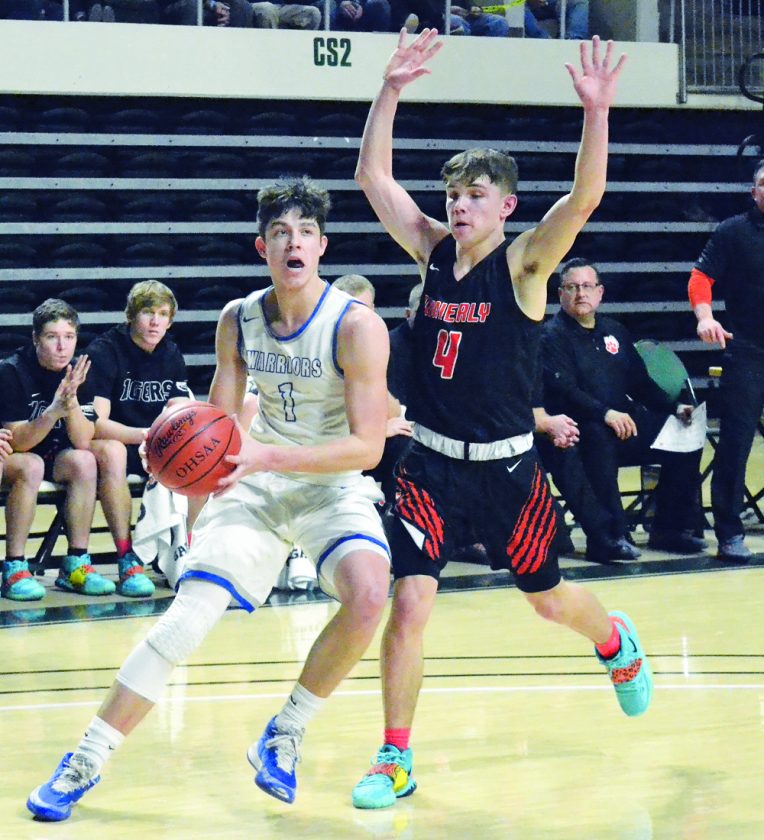 ATHENS — Brandon Simoniette was loud and clear in the second half after a relatively quiet first two quarters of play.

Simoniette wasn’t the only Warrior to do that, either, as sophomore Brayden Sallee added 13 points, including a huge putback in the final seconds. Kurt Taylor netted eight points, all in the first half.

“Yes! We get to play again,” Maddox said. “We’re coming back to the Convo. I’m so proud of this team.”

Waverly (19-7) was paced by sophomore Trey Robertson’s 15 points, about six points below his average per game. Will Futhey chipped in with nine while Zeke Brown and Tanner Smallwood had seven and six, respectively.

During regular-season play, the Tigers downed the Warriors, 63-60

How close was the district semi?

The contest featured 16 lead changes and five ties. Neither school ever had a double-digit advantage.

“It was a great game, and I’m so proud of our guys who fought so hard,” Simoniette said. “It’s a great feeling, and I’m so happy that we were able to come out with the win.”

Sparked by Futhey’s six first-quarter points, Waverly staked itself to a 15-14 advantage. Warren actually led most of the first eight minutes and had a 14-8 lead at one point. Sallee led the charge with six points. Simoniette’s triple early on were the only points he had in the first half.

In the second quarter, Taylor scored five points, including a 3 which evened the count at 19. Robertson had all seven of the Tigers’ points.

At the intermission, it was 22-all.

In the third quarter, Simoniette had the hot hand, scoring eight points. But the Warriors were outpointed 13-10 and trailed by three going into the final eight minutes of play.

“Simoniette stepped up, didn’t he?” Maddox said. “He hadn’t done anything. But we told him it was his time and he turned it on and played well.”

At the start of the fourth quarter, Simoniette drained two straight trifectas to give Warren a 38-35 advantage.

“It’s a great feeling whenever you catch on fire,” Simoniette said.

About midway through the stanza, though, Waverly regained the lead, 41-40, on Futhey’s putback. But it was short-lived as Warren’s Joel Chevalier knocked down a 3 to make it 43-41 Warriors.

With under a minute remaining, the Tigers had an opportunity to tie the score but Robertson was only able to convert one of two at the charity stripe.

With time running out, Warren’s Jake Baumgard had a layup blocked by a Waverly defender. But Sallee was there to get the rebound and scored to give the Warriors a three-point cushion, the final margin of victory.

“I was in the right place at the right time,” Sallee said. “They found Jake down court, and I just got lucky there. Jake didn’t even see the guy (Tiger defender).

“Really, though, Joel and Brandon picked it up in the second half, and I think that’s the main reason we got the win.”