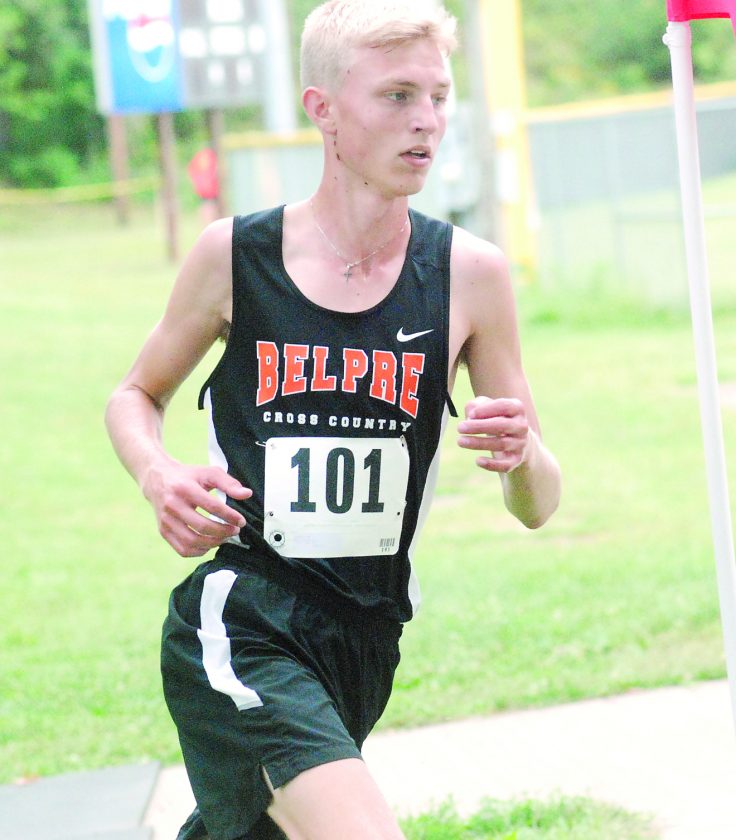 Photo by Jordan Holland Belpre junior Eli Fullerton runs in this past fall’s Belpre Invitational cross country race at Civitan Park. Fullerton also is a track standout and is trying to stay in shape while spring sports are suspended.

The Belpre High School athlete, who attends Belpre Christian, was coming off quite the cross country season.

In 2018, Fullerton joined former Golden Eagle standout Breydon Gates as the only BHS thinclads to earn all-Ohio cross country status. As a sophomore, Fullerton finished sixth and this past fall he earned all-Ohio honors again when he took fifth.

“It’s kind of boring staying at the house all day,” he said. “I mean it was probably about a week in and I was like I need to start doing some stuff and going places.”

Also a baseball player for head coach Terry Mullen, Fullerton was eyeing the school record in the 3200, which is owned by Gates.

“I was trying to get another school record, but I always have next year to try and get it,” noted the junior. “I was two tenths of a second off last year at the state track meet.

“I got sixth in the 3200. That was the only thing I qualified for. I ran the mile and 2-mile at the district, but I just ran the 2-mile at regional. Just trying to focus on one event.”

“I’m hoping not, but at this point I’m kind of just accepting it’s a very good possibility,” he said of having no more school this spring. “I’m just trying to stay positive through all of this craziness.

“I’m just trying to maintain what I was in case there is a season, but if not I’ll just start switching to a cross country schedule and workout.”

The Golden Eagle said he’s doing roughly 40 miles a week right now with a max of 45 for track.

Hoping to run cross country and track at the next level, Fullerton said “I’m talking to a couple college coaches at the moment, just trying to stay focused. This is going to mess everyone’s recruiting class up in some way, shape or form.

“I’m trying to stay positive and do my best to get my times down. Right now I’m just keeping my options open. I’m looking at a school in Indiana and one in South Carolina. There are a couple others, but those are the two main ones at the moment.”

A PlayStation 4 gamer, Fullerton said aside from working out and doing online work for school he’s been playing “a lot of Call of Duty and Minecraft.”

After finishing school at Belpre Christian, Fullerton said he would go home, change and then head to baseball practice. He’d then go home and run on his own.

Trying to get used to social-distancing guidelines, the Golden Eagle added “it’s a little crazy to think because I’ve never seen anything like this before. I’m just trying to adjust and see how everything will play out.

“I try to keep in touch with a couple people here and there. At the same time, you run out of stuff to talk about because you are not really doing anything.”

Despite the uncertainty of what’s going to happen next or if there ever will be a return to normalcy, Fullerton is just trying to take things in stride.

“Obviously, there is a lot of time and hard work to put into it,” he said of being an elite runner. “I have to put in a lot of miles, but having a God-given gift and really using it for His glory has really helped me.

“Even if you have a couple bad days, just stay positive and keep working. I just keep running and doing what I can and whenever it’s time to go it’s time to go. Just got to keep it up.”