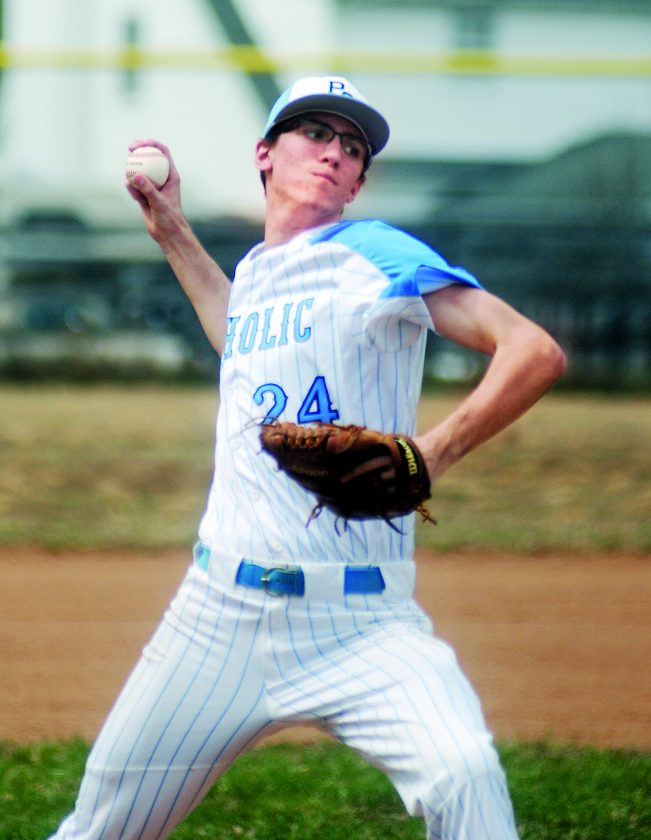 Times file photo Parkersburg Catholic’s Pat Copen throws a pitch during a high school baseball game last season. The 2020 spring sports seasons in Ohio and West Virginia have been canceled due to the COVID-19 pandemic.

PARKERSBURG — Patrick Copen’s swan song for his career at Parkersburg Catholic didn’t end the way he had hoped.

Instead of playing baseball this spring for head coach Tom Harvey and moving on to Marshall University to pitch for the Thundering Herd, he’s been sidelined like fellow student-athletes across the country due to the COVID-19 pandemic.

Following a 41-38 setback early last month in Naugatuck to Tug Valley in a Class A Region IV co-final, it was supposed to be full speed ahead on the diamond.

It was to be a season where Copen was hoping to move up one spot on the all-state ladder after earning second team honors in 2019.

“Finishing my last game of basketball on not the note I wanted to was obviously a little heartbreaking,” Copen admitted.

Riding in the school van on trips, even following losses, was something Copen always will cherish.

He spoke of how the Crusaders also had their season come to an end the same way during their sophomore campaign at Tug Valley before finishing as state runner-up during his junior year.

“At first it was not so good, but toward the latter half of going back you kind of relive all the memories of your season and the past four years,” added Copen, who was named first team all-state this year in basketball. “It’s kind of nice. Then again, you get home and what do I do now?”

The answer to that was simple, but what transpired after it are memories which will last a lifetime.

“Going to the girls game the next day and cheer them on and go through practice,” was the plan as the Crusaderettes were in the state quarterfinals at Charleston.

“Then halfway through the game we heard it might get canceled and my heart dropped. We ended up having practice that day and it was my only practice and after that they said no more practices.”

Unable to control the situation, Copen has attempted to use his time wisely and focus on his future as a student-athlete.

“During quarantine I’ve kind of tried to keep working because eventually this is going to clear up, whether it clears up in the summer or in the fall,” he said. “There will still be baseball played for me. It’s kind of been easier for me.

Unfortunately, it’s not just the players who are dealing with this.

“I’ve talked to coach Harvey a few times,” Copen added. “He’s a little bummed out not knowing what to do. He told me multiple times he’s been coaching baseball for 20-some years and now he’s got nothing to do. Since I’ve been 5-years-old I’ve been playing baseball every single year.

Even though his time playing sports at Parkersburg Catholic are over, Copen is looking forward to some sort of graduation with his classmates.

“I’m not really sure what’s going to happen,” he said. “I know Father (John) Rice and the administration will come up with something that will include everyone and make them happy.”