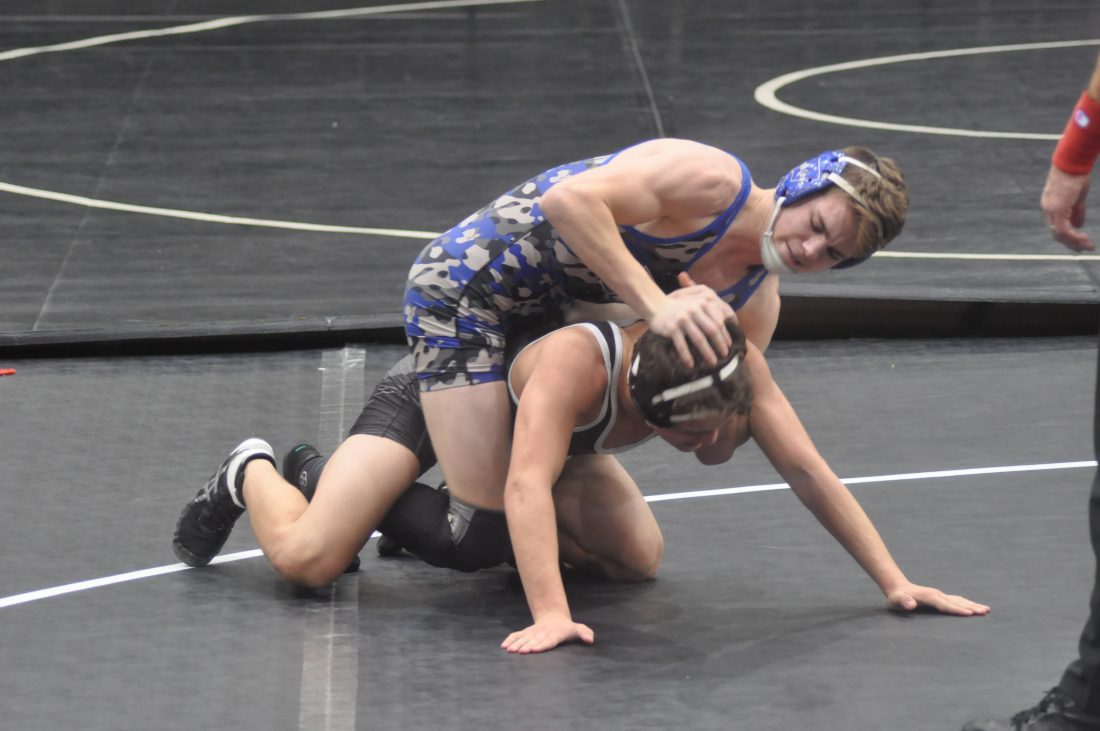 Photo courtesy of Michelle Kellar Warren junior Peyten Kellar competes during a high school wrestling match this season. Kellar qualified for the Ohio state tournament, but never got the chance to compete due to the coronavirus pandemic.

VINCENT — Peyten Kellar didn’t hesitate when asked if he felt good about his chances going into the state wrestling meet last month.

Kellar compiled a perfect 48-0 record on the wrestling mat this season, winning an Ohio Valley Athletic Conference championship and a district championship on the way to qualifying for state in the 145-pound weight class.

Kellar’s no stranger to competing in Columbus, earning All-Ohio honors as a freshman (fifth place at 106) and sophomore (seventh place in 126). This year, feeling good fresh off knee surgery in November, he was ready to take the next step.

“After the surgery I thought I came back better than ever before,” Kellar said. “I thought I had a shot to win it.”

But before the tournament could even get started, it was postponed, and later canceled due to the coronavirus pandemic, along with the state basketball tournaments.

“It was kind of heart-breaking,” said Michelle Kellar, Peyten’s mother and Warren’s assistant wrestling coach. “I understand the severity of the issue, but I’ve also seen how much work he’s put in. Now all that’s been taken away from him. It’s been crazy.”

“It was very disappointing,” added Peyten, who is already looking at a few colleges but hasn’t made a decision yet.

The season got off to a rough start for the Warrior grappler as he started feeling some pain in his knee during a camp.

“We took him to OSU and he had surgery on his meniscus on Nov. 8,” Michelle said. “He missed about a month, and was back competing on Dec. 23.”

While sidelined, Kellar was forced to miss a couple big tournaments, including the highly-regarded Ironman tournament in Cuyahoga Falls. He’ll get a chance at redemption as he’s already been accepted into next year’s competition.

After recovering from the injury, Kellar went on to dominate his way through OVACs and districts, upping his career record to 147-10. Three wins in Columbus would have put him at 150 for his career, a milestone he was looking forward to achieving.

“I feel pretty good about it,” Kellar said of his undefeated season. “I’m still bummed I couldn’t finish it and get my 150th win at state.”

Kellar’s goal is to get to 200 wins by the end of his senior year, a mark well within reach. However, due to the state-mandated stay-at-home order, Kellar’s been limited in what he can do to train.

“Only thing I can do is body weight, bike and run,” he said. “That’s about it.

In late March, he was supposed to be in Virginia Beach for nationals, but that’s been postponed as well, Michelle explained.

“I’m just going to keep working hard this year and get better for next year,” Kellar said.

He added, with a chuckle, “We need to take down corona.”