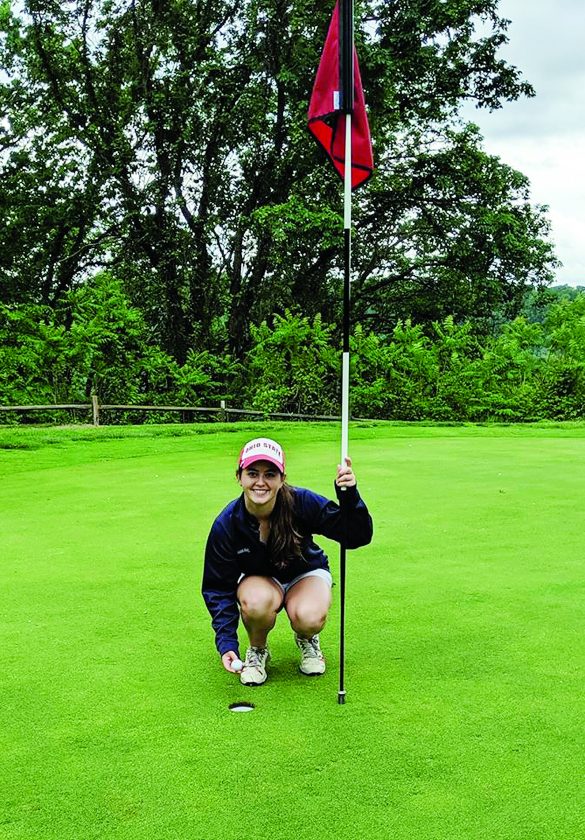 Courtesy photo Former Parkersburg South Patriot Adeena Shears, who had her senior golf season cut short at Ohio State University, poses for a picture last May at Lakeview Course in Morgantown after recording an albatross on the par 5, fifth hole.

Not long ago, Shears was doing a little fishing with her mother at the family pond in Wirt County.

“That particular day the water was way too cold. My fiance Shannon (Wilcox) was ready to sacrifice himself. I don’t know if it would’ve worked. Everything on that phone is on my Google account so I can get on the computer and pull up any picture that I have. I didn’t really lose anything, just the phone itself.”

Due to the COVID-19 pandemic, Shears has to finish everything online and then will start her master’s program the same way.

“It will be for a year and I will have the ability to teach children pre-K to fifth,” said Shears, who was hoping to help lead the Buckeyes to a repeat Big 10 championship this spring. “I’m really excited about that next step. It just kind of stinks how everything played out.

“I felt like Ohio State had a pretty good golf team. I was improving immensely on my scoring average from previous years. I had high hopes for Big 10 and then my last five or six tournaments I didn’t get to play. I felt this was going to be the year and it was.”

The ex-Patriot admitted of winning the conference title again “it would’ve definitely been attainable. The Big 10 is not an easy conference to win, that’s for sure. Michigan State was by far our biggest rivals this year. They pretty much had everybody from last year returning.

“That would’ve made it difficult and we lost our senior last year who actually was co-medalist at the Big 10, but we also gained a couple of good players and we’ve all improved from last year. I felt like we could’ve done it again without a doubt.”

The Buckeyes reached the NCAA tournament when Shears was a sophomore, but their season ended this spring in Hawaii.

“It was kind of interesting what happened,” she explained. “We had a tournament in Hawaii (Oahu). Just as we landed when we flew out there were no cases in Hawaii, but the corona was just kind of coming into the United States and people were starting to get infected. When we landed my coach on the newspaper stand there, she saw the headline, first corona case found in Hawaii and she kind of freaked out a little bit. On our final day everything happened in a span of like two hours.

“They moved classes online. We found that out after our final round in Hawaii. The day after in the morning we found out that school was canceled for the rest of the year. Then we found out our next tournament was canceled, the next one was canceled and then the Big 10 and the NCAA were canceled. I woke up at 8 and by 10 o’clock everything was done. Just kind of seemed like they didn’t want to wait until the end of May, but for a good reason now, but it was like why did they know that.”

Shears added the flight back not only was sad, but she found it hard to sleep that off.

“Our last college tournament, it was probably the best one to end on as far as the location is concerned,” she added.

Expected to do a virtual graduation on May 3, Shears is just hoping she will be able to complete her master’s as planned because she has to spend time in actual classrooms for field work and observation.

One of the hardest things she had to go through was cleaning out her golf locker.

“It was filled to the brim with balls, old clubs, gloves and a bunch of papers I’ve had throughout the years so that was kind of tough,” said the two-time West Virginia women’s amateur champ.

“People had to have everything cleaned out of the dorms in three days time. It was ridiculous.”

Although she lived off campus, Wilcox was living in the dorms and they opted to leave OSU together.

In her final season, Shears finished tied for second on the Buckeyes with a 73.9 scoring average.

Despite having the option to return after the NCAA granted an extra year of eligibility, it wasn’t in the cards.

“I had to think about me and my future family and everything like that. Golf is amazing, but there’s no way I could’ve done both and still been sane. I’m really feeling excited for this master’s program.”

If everything goes according to plan, Shears will get married on June 20.

“We have that date on everything,” she said. “It’s kind of our day. It’s been our day for a little less than a year, almost a year.

“Right now everything is going as planned and the place is still able to do events. It’s still hard with the wedding coming up and there are a lot of ifs.”