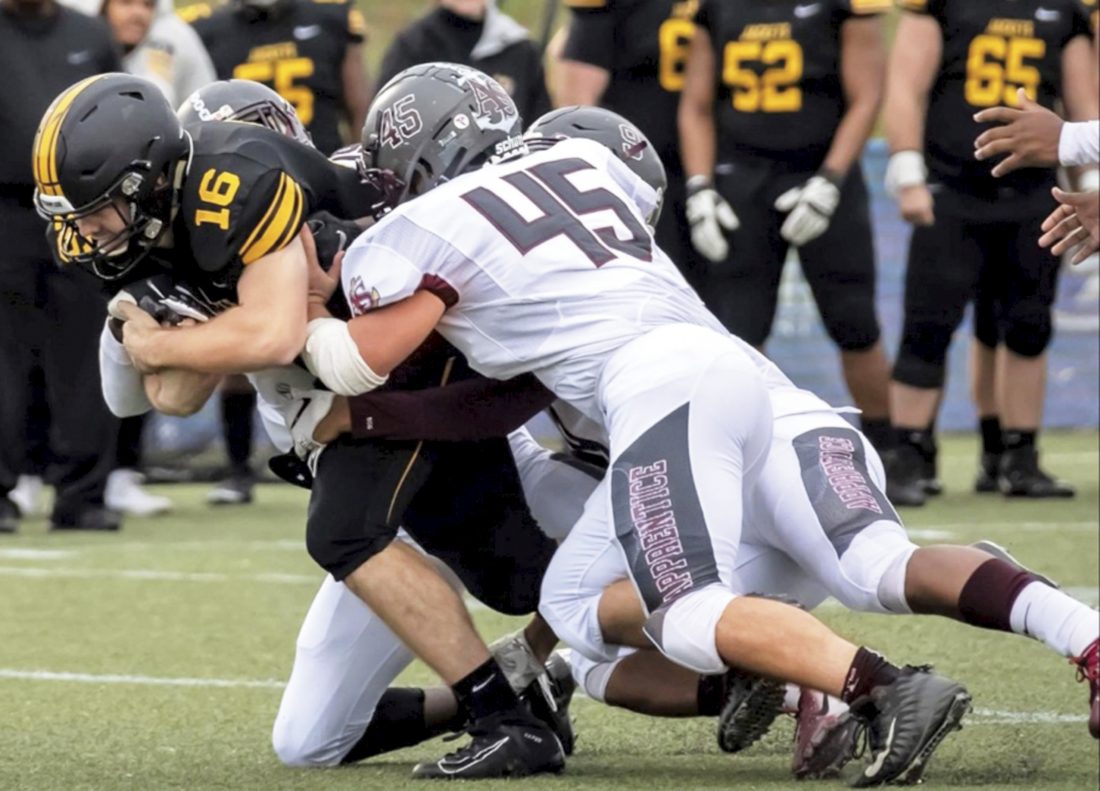 Photo provided The Apprentice School’s Luke Jackson (45) joins in on a tackle during a 2019 regular-season game. Jackson adjusted well to the demands place on him at the trade institute this past fall.

RAVENSWOOD, W.Va. — Very little about Ravenswood graduate Luke Jackson’s first year of higher education strayed into the realm of normal. The Apprentice School’s curriculum differs from the askings of many universities. While Jackson attends multiple trade classes two days a week, this is mainly where his regular experience ends. His other four days away from the classroom combine his love of the outdoors and “getting his hands dirty.” The construction of aircraft carriers for the branches of the United States military, sometimes in 100 degree heat, earns him $20.88 over each eight-hour shift on those days.

This routine partially transpired once again before an interview Monday evening. COVID-19, as it has done for almost everyone in the United States, changed this daily itinerary. He’s completing classes online from his dorm room instead of building ships, but still getting paid.

It is not a bad position to be in for any 19-year-old.

However before the warm weather emerged, the countdown to the cold months fluttered off the calendar at the end of 2019.

This time frame saw football added to the list of Jackson’s other fall duties. After a full work day, his Builder teammates and he recovered energy with Gatorade bars or a peanut butter and jelly sandwich before hitting the practice field at 4 p.m. Games followed each Saturday for the next 10 weeks.

All these tasks, he acknowledged, proved a lot for just one plate. Yet Ravenswood High School’s all-time leading tackler said he enjoyed every bit of the process, even adjusting to the heat of the wide open shipyard in Virginia. His many jobs often included showing his will to win or succeed – heart he became well known for during his time as a Red Devil. These displays brought the immediate attention of head coach John Davis. “We saw him be extremely productive in practice and saw him get excited about his development through out the season.”

This improvement didn’t immediately afford Jackson his customary spot at linebacker. As with many freshman players, he worked on the assignments from his coaches that were capable of granting him playing time.

“I still repped at linebacker to show I was willing to give it my all no matter what. I definitely have a huge competitive nature. And I am here for the team and not just for myself,” said Jackson.

Willingness to put team first and show his drive regardless of what was asked of him netted him a high honor. Coaches named him one of just two freshman to the team’s ten-man leadership council.

“Luke has all the qualities that you look for in a leader. He leads by action but also has a strong voice. He is quite confident and has an ability to understand what it means to be a leader and we are proud of him that he has that kind of attitude,” said Davis.

This mind set helped him on the field — it really had to. Davis and his coaching staff discovered another talent possessed by Jackson. As he was a read-and react linebacker at the high school level, there were little opportunities for him to rush the passer. Turns out, he excelled at nose guard despite his 5-foot-9, 215 pound frame.

“He just embraced it and he has an extra gear at nose guard and he puts him game face on as a defensive player,” said Davis. Though usually outmatched by five to six inches and upwards of 100 lbs., Jackson menaced opposing quarterbacks with the use of his quickness. “Some lineman couldn’t even bend down low so I got good pressure on the QB,” he said.

While playing on the line, he netted his first college career interception against Southern Virginia, along with several QB hurries and 1.5 sacks. “My confidence started growing after every game. Where in Ravenswood I was a big fish in a little pond, here I was a little fish in a big pond. I had to understand it doesn’t matter how big, strong or fast my opponent is I have what it takes to compere with these guys. Once I did this, the dog started coming out in me again,” said Jackson.

This emergence brought him a gift: His final three games saw him start at linebacker and he picked up where he left off in high school.

Depending on the work he does over the summer, head coach John Davis said Jackson’s set himself up for a starting role next season. “The way our defense is built it is about playing the most productive guy. It is up to him and he knows we are all about competition.”

Jackson said he plans to take his coach up on the offer.

“I wouldn’t trade this year for anything. I have established a comfort level here and plan to make a bigger impact next fall.”