Maddi Swaney ‘just does it’: MHS grad making her mark on the golf world 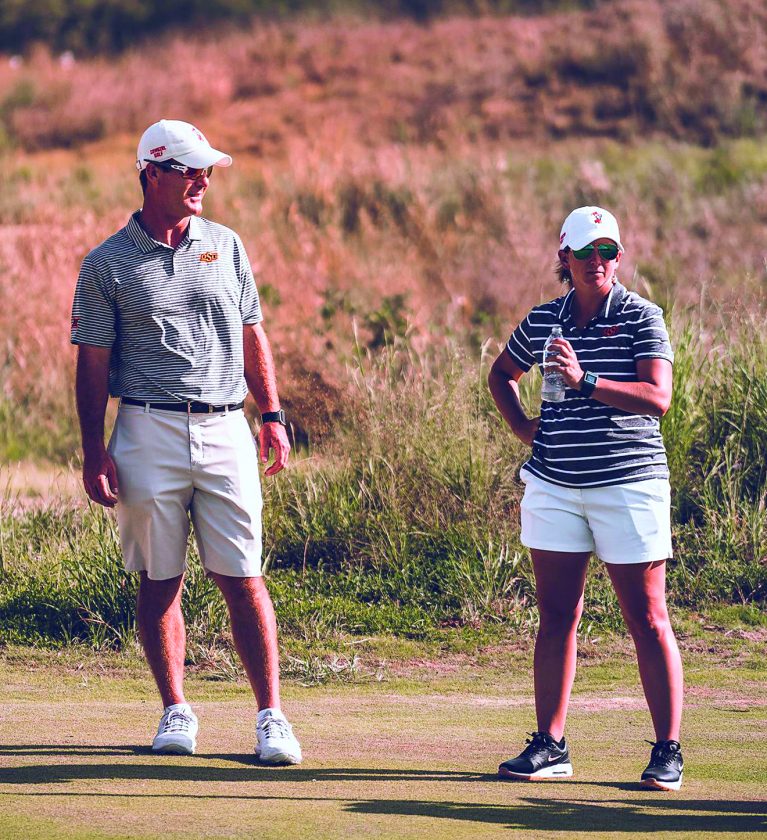 “We joke that her nickname is ‘Nike,’ because she just does it,” Robertson laughed.

Swaney, a 2005 graduate of Marietta High School, does a little bit of everything as an assistant coach. She specializes in recruiting and developing talent, something she did well for eight seasons at Kent State and now two at Oklahoma State.

“She takes initiative on things,” said Robertson, who’s coached with Swaney for seven years now. “In the beginning, I put a lot of trust in her, in terms of her ability to coach and recruit. The more I saw her work and the way she did things, it became easy for me to place a lot of responsibilities on her. She knows what needs to be done and she doesn’t need to take shortcuts on anything. She just gets things done.”

Swaney’s story begins here in Marietta, where she developed herself into one of the best golfers in the state of Ohio. She was a three-time state qualifier, and narrowly missed winning the state title her junior year.

“I remember qualifying for the state championship when I was a sophomore,” Swaney recalled. “Playing at Pine Hill Golf Course outside of Columbus, I remember that being pretty cool. My junior year, I qualified as well. The second day I was in the lead group. It was coming down to myself and Carly Truitt, who was the same age as me. She birdied the last hole and ended up beating me by two shots. It was one of those things where you’re going back and forth for most of the day.”

Swaney was set to continue her golf career at the collegiate level. She had to decide between Kent State and Michigan State.

“I was kind of being recruited by Michigan State,” she said. “I went on a visit there and it just wasn’t what I was kind of expecting. When I went to Kent State, I really felt like I hit it off with the coach there. Both programs had been pretty successful.”

Ultimately, she chose the Golden Flashes.

“I knew I’d have to work a little bit to play there, but I really like the coach,” Swaney said of KSU’s coach at the time, Mike Morrow. “I felt like he was always going to be there for me, and that’s what I got. It felt like a family.”

At Kent State, Swaney was a four-year letter-winner and earned second team All-Mid-American Conference honors twice in 2008 and 2009. She finished her career with a scoring average of 78.7, which ranked ninth in Kent State history upon her graduation. One of her favorite memories as a college player is competing in a tournament at Ohio State.

“Being at Kent, we’re always viewed as like the stepchild to Ohio State,” Swaney laughed. “We played at their course and won. We always wanted to beat Ohio State, so we played with a little chip on our shoulder.”

After graduating from Kent, Swaney “tried to stay in golf as much as possible,” she said.

She did an internship with the American Junior Golf Association for about nine months before getting a full-time job at IMG in Florida. She had let Morrow know she was interested in coaching, and in 2011 was hired as Kent State’s assistant coach.

“My senior year I was starting to think, ‘What do I want to do after college?'” Swaney said. “I didn’t want to play professionally — you just have to be so good, and there’s such a different commitment and ability to that.

“I kept thinking (coaching) was something I wanted to do. When (Morrow) reached out to me, there was no hesitation.”

Swaney learned under Morrow for a year and a half before he retired. In 2013, Robertson was named Kent State’s head coach. The two have worked together ever since.

“When he was interviewing, there was no way I was ready to be a head coach,” Swaney said. “I knew that, and I was realistic. (Robertson) ended up keeping me. It was his first head coaching job, and I already knew a lot about the school and the program and its history, so I could help him with that. And he helped me in other ways. He let me learn by going and doing things. He’s not a micromanager at all. I was always appreciative of the fact that he never treated me like a subordinate. He always treated me as equal and validated my opinion.”

With Swaney and Robertson leading the way, Kent State women’s golf became a national contender. In 2017 and 2018, the Golden Flashes claimed back-to-back fifth-place finishes at the NCAA Championships.

“I think the team was ranked 65th or 70th the year before we started there together,” Robertson said. “When we left, we were ranked fifth. We made all those strides, and Maddi had so much to do with that.”

In 2019, Robertson accepted the head coaching job at his alma mater, Oklahoma State. Swaney had hopes of becoming the head coach at Kent State, the school at which she’d spent her entire career, but it wasn’t meant to be.

“When he got offered the (OSU) job, he told me first thing, ‘I want you to get the job at Kent State. Should you not want it, I would really like you to come to Oklahoma State,'” Swaney recalled. “I did want the (Kent State) job, for a lot of reasons. I really loved the players there and I went to school there. It was more of a personal decision for them to go another way. I knew that. It was hard to take, but I was OK. I truly believe things happen for a reason.”

Swaney made the decision to come aboard with Robertson at Oklahoma State, which has presented different kinds of challenges.

“It’s been an adventure for sure,” she said. “Even though he went to school there, we’re both learning so much just about the school, the history and the nuances of how things work. It’s been really nice in a lot of ways. This community of Stillwater loves Oklahoma State, and they have a great following in that regards, especially for golf. There’s definitely some high expectations.”

Robertson was thrilled to have Swaney back at his side, but was hoping to see her get the Kent State job.

“For me, selfishly speaking, that was just a big weight off my back,” Robertson said. “I wish she would’ve gotten the job at Kent State. I think she deserved it, but it didn’t happen that way. I could not have asked for a better situation — I get somebody I trust and rely on to be right there. That was huge for me”

Unfortunately for Swaney, Robertson, and coaches and athletes all over the country, the spring sports season has been canceled at the collegiate level due to the COVID-19 pandemic. The situation has added an extra challenge for Swaney and Robertson as they try to continue to build the Oklahoma State program.

“Everything was changing so quickly, the news and everything was just happening hour by hour,” Swaney said. “It’s one of those things where you’re hopeful, then that’s not realistic. Then you kind of come to terms with how it’s going to be. Obviously, it stinks and isn’t ideal, but I think in the grander scheme of things, it’s a game and we’re lucky to be able to do it and it’s not life and death like some other things. I try to keep that perspective.”

Being in Oklahoma has been somewhat of a transition for Swaney. When she was at Kent State, she could visit her parents, Mike and Cheryl, who still live in Marietta, on a given night and return to Kent in a timely manner.

“Now it’s a little complicated,” Swaney admitted, although she did return to Marietta for Thanksgiving and has had relatives visit her in Oklahoma multiple times.

She still would like to be a head coach one day, but isn’t in any hurry.

She has Robertson’s endorsement.

“She’s one of the hardest workers I’ve ever been around,” he said. “I keep saying I wouldn’t be here today without the work she’s done. She’s meant a lot to the Kent State program, and will mean a lot to Oklahoma State as well. I think she’s going to have a lot of great opportunities.”