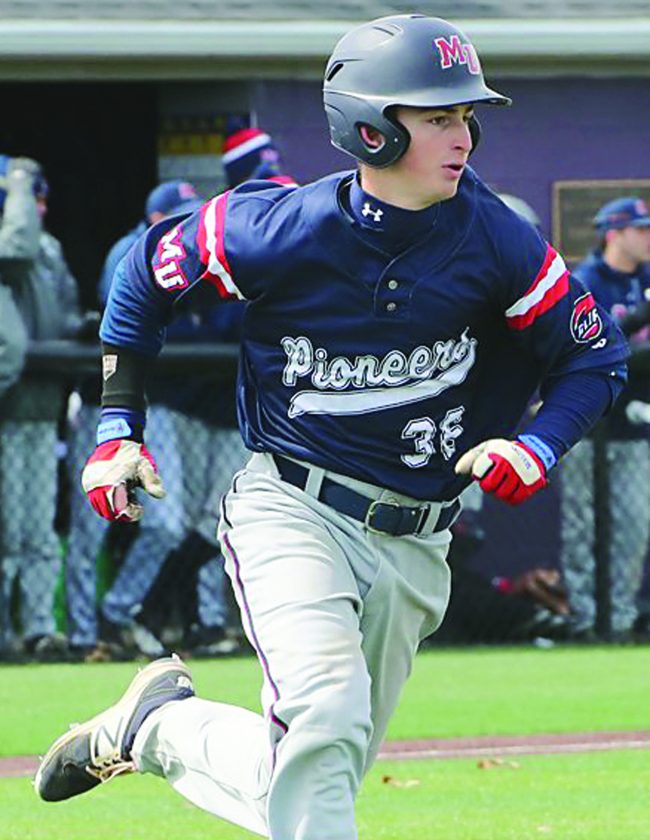 Photo courtesy of Malone University Malone University’s Turner Hill runs to first base during a college baseball game last season. Hill was having another solid year on the diamond before the coronavirus pandemic cut his junior season short.

Turner Hill made the absolute most of the final at-bat of his junior baseball season at Malone University.

In the team’s final game of a Florida trip on March 9, the Pioneers’ leadoff man stepped up to the plate in the bottom of the ninth, the score tied at 11-all against Assumption College, and a runner at third.

Hill worked his way to a 2-2 count before fouling off three straight pitches. The next pitch, he hit a chopper over the first baseman’s head for a walk-off single. The runner at third, who happened to be Turner’s younger brother, Kail, a Malone freshman, easily scored the winning run for the Pioneers. Little did they know at the time that was how their season would end.

“We got back from Florida, and the day after we got back we found out everything was canceled,” Hill said. “We had a team meeting and the coach kind of let us know the information he got from the league. That was really upsetting news to hear.”

Hill said some of the team’s seniors already have jobs lined up and may not be able to exercise their extra year of eligibility granted by the NCAA.

“They may not be able to come back, so to have their careers cut short like that is really disappointing,” he said.

“I’m pretty certain I’ll use (my extra eligibility), so I’ll have two years left after this.”

It was a sweet end to the shortened season for Hill, a 2017 graduate of Marietta High School. His brother Kail worked his way into the starting lineup the last couple games of the Florida trip to set up the special moment at the end.

“That was actually a pretty cool experience,” Turner said. “We got off to a slow start on the trip, so it was really nice to pick up that win. And it was really cool to hit my brother in.”

“To be honest with you, I wasn’t sure what to expect going in as a freshman,” he said. “I went in with the mindset to work hard and take advantage of any opportunities I get. I was fortunate to get opportunities right away, and I played well and kept getting opportunities. I’m pretty happy with how that went. I felt like I played better than I expected. My junior and senior year, I’m wanting to expand on that and play even better.”

When Hill evaluates himself as a player, he acknowledges his strengths as well as the areas where he can improve.

“At the plate, I’m really happy with how well I’ve been able to get on base and not strike out much,” he explained. “I’d like to see myself hit for more power. Hopefully I can get a little stronger and start hunting better pitches earlier in counts and do some more damage.”

Hill’s success should come as no surprise to anyone who followed his high school career.

He was a four-year starter for Jim Thrash’s Tigers and was a two-time first team All-Ohio honoree, the first MHS baseball player to ever accomplish such a feat. He helped lead the team to 24 wins and a district championship as a senior in 2017. As a prep player, Hill could do just about everything — he crushed the ball to all fields, played incredible defense in center field, ran the bases well, and was dominant on the pitcher’s mound.

Hill’s baseball class at Marietta featured 10 seniors, many of whom played together for years growing up. Included in that class were Isaac Danford (a junior for the Marietta College Pioneers), Trent Dawson, Brandon Neville, Brandon Schamp, Danny Hiser, Zach Deskins, Boyd Bingler, Will Eschbaugh and Noah Miller.

“I think about that a lot,” Hill said. “The core of my senior class, we had been playing together since middle school. We always had the mindset that we were going to do something big by the time we graduated, like win a state championship. Sometimes it’s a little upsetting to think that we fell short, but I wouldn’t have wished for any other group of guys to have played with. We left everything out there and worked as hard as we could.

“I still talk with a lot of them. Isaac, we’ll still go hit in the cage and stuff like that.”

Hill currently is in Marietta with his family, taking classes online and attempting to maintain a baseball regimen the best he can.

“I’m trying to get little workouts in at home, and I’ll go with my brother and hit in the cage when we can,” Hill said.

“It’s a tough adjustment. You work all offseason to build up for spring, and you don’t even really get to play the majority of the season. I guess stuff like that happens.”