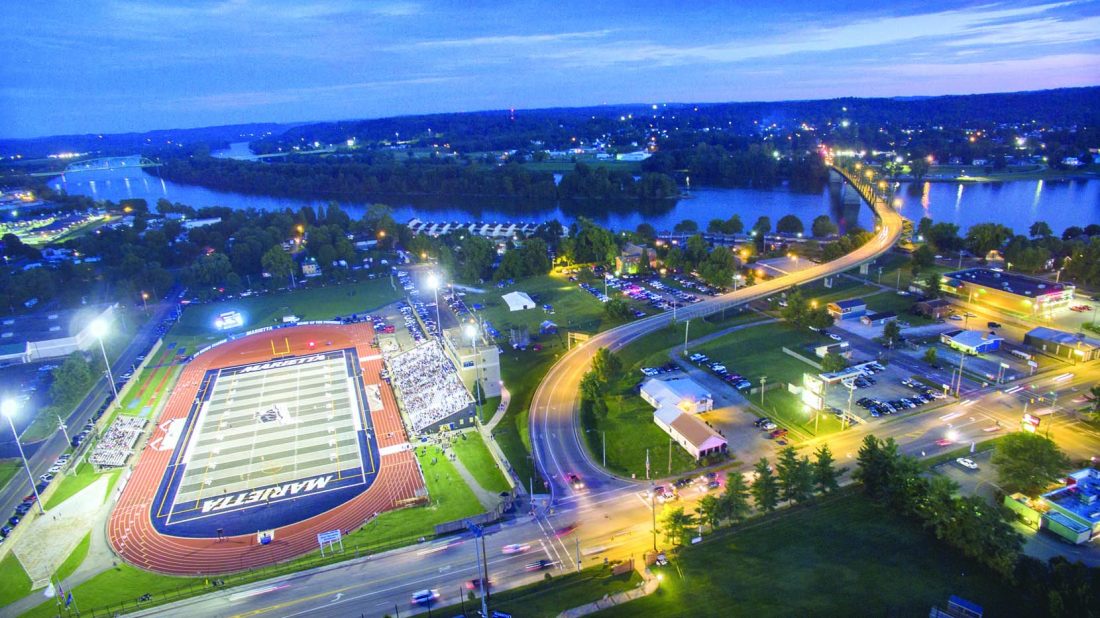 Photo courtesy of Phil Mason/Marietta College Marietta College is joining the #BeTheLight movement to honor local high school seniors. In April and May, the college will turn the lights on at Don Drumm Stadium and Marietta Field every weeknight, honoring a different area high school each day.

Marietta College is planning to light up the sky in honor of the area’s high school seniors.

The college is joining the #BeTheLight movement, an idea which started at Dumas High School in Texas, and will turn on the lights at Don Drumm Stadium and Marietta Field, on opposite sides of Pike Street, for an hour starting Monday. The idea is to honor students who have had their senior years affected by the COVID-19 pandemic.

Tom Perry, vice president for communication and brand management at Marietta College, drew inspiration from what was being done in Texas and wanted to bring it to the Mid-Ohio Valley. He relayed the idea to Athletic Director Larry Hiser and Sports Information Director Jeff Schaly, and it grew from there.

“We know this won’t replace all of the memories they would have made completing their spring athletic seasons, attending prom or receiving their diploma during graduation,” Perry said. “This is just a small gesture of solidarity.”

The first school to be recognized will be Marietta High School. Along with lights being turned on at the venues, graphics for each school have been created and will appear on the video board at Don Drumm.

“We started a discussion of what it would look like, how much would it cost, what would it mean?” Hiser said. “It’s just a public way for us to say we empathize, we know what you’re going through and we wish the lights were on for you.”

The event also will be tied to social media. The Marietta College Twitter and Instagram accounts will run graphics each day for the school that’s being recognized.

The idea has resonated with local high schools, including Marietta and Fort Frye.

MHS Athletic Director Cody Venderlic said the Tigers are planning to have the lights turned on at Glendale Field in Marietta and Jerry Brock Field in Devola from Monday through Friday next week. Like the college, they’ll go from 8:20-9:20 p.m. They’ll hang banners at each venue, plus Don Drumm Stadium, to recognize their senior class. Venderlic plans to participate for the first week and see how it goes.

“The biggest thing I’ve been trying to bring in to the coaches and parents I’ve talked to is we’re trying to be as positive and optimistic as we can at this time,” Venderlic said. “A lot of people are hurting. I truly believe that positivity and optimism bring future success. Instead of focusing on what we’re missing, if we can use this time to look toward the future, this can be a positive time at the end of the day. That’s kind of why we’re excited to do this.”

The second school to be recognized will be Fort Frye. From an athletics standpoint, the Cadets were hit as hard as anybody by the pandemic as their girls basketball team had to miss out on competing in the state tournament.

“We actually had to go tell our girls basketball team seconds before they left the pep rally that they weren’t going,” said Fort Frye Principal Andy Schob.

In honor of the girls basketball team, the spring sports athletes and all the seniors at the school, Fort Frye will turn the lights on at its football stadium next week, the same time and days as Marietta College.

“We’re obviously appreciative of the college doing this,” Schob said. “We’re going to turn on the lights at our stadium at the same time. We’ll have our Fort Frye flags line the streets and have spring sports banners lined up across the fence. We encourage everyone to continue practicing social distancing, but to drive by the stadium if you can.

“This doesn’t make up for what the students have lost, but it’s a nice way to honor and recognize them and show them we’re thinking of them.”

On May 1, Marietta College will honor its senior class two days before graduation. On May 22, they’ll honor the college’s incoming freshmen.

Hiser believes lighting up Don Drumm and Marietta Field will have a special feel to it.

“Those two just have a nice presence when they’re on together,” he said.

Schob is happy to see the community uniting during a difficult time.

“It’s just really cool to see everyone in our area come together and work together in thinking of ways to help each other out and honor each other,” he said. “I’m really appreciative of Marietta College for reaching out to our schools.”