File Photos Williamstown’s Sam Cremeans drives down the lane in a 2019-20 regular-season contest. Cremeans helped the Yellowjackets to the No. 1 seed in the Class A state tournament and was honored on the W.Va. Class A All-State First Team as voted on by the West Virginia Sports Writers Association.

Parkersburg Catholic’s Patrick Copen looks to pass to an open teammate during a 2019-20 regular-season game against Winfield. Copen was named to the Class A All-State First Team as voted on by the West Virginia Sports Writers Association. 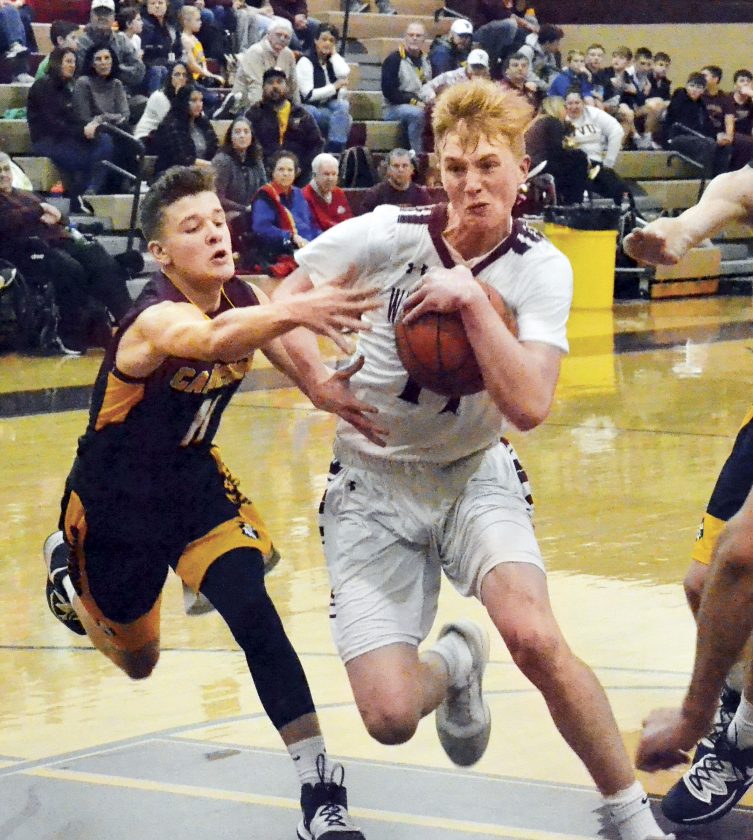 File Photos Williamstown’s Sam Cremeans drives down the lane in a 2019-20 regular-season contest. Cremeans helped the Yellowjackets to the No. 1 seed in the Class A state tournament and was honored on the W.Va. Class A All-State First Team as voted on by the West Virginia Sports Writers Association.

CHARLESTON — First-year Charleston Catholic head coach Hunter Moles was looking forward to the Class A state tournament and hopefully cutting the nets down, but the COVID-19 pandemic changed those plans.

The Irish, who were hoping to claim their first state crown since 2012, earned the No. 2 seed and a big reason why was because of Aiden Satterfield. The junior big man was selected as the captain of the Class A all-state first team which was released Wednesday by West Virginia Sports Writers Association.

“He’s a gym rat and wants to play college basketball,” admitted Moles of his 6-foot-5 plus wing, who threw down 23 dunks. “I’ve known Aiden since he was little.

“He’s allowed me to push him and I knew we were going to have a good player in Aiden. He’s going to keep getting better on his all-around game.”

Satterfield finished as the leading scorer for the Irish. Along with averaging 19.1 points per game, he also shot better than 51% from the field and collected 4.9 rebounds and 2.1 steals a contest. 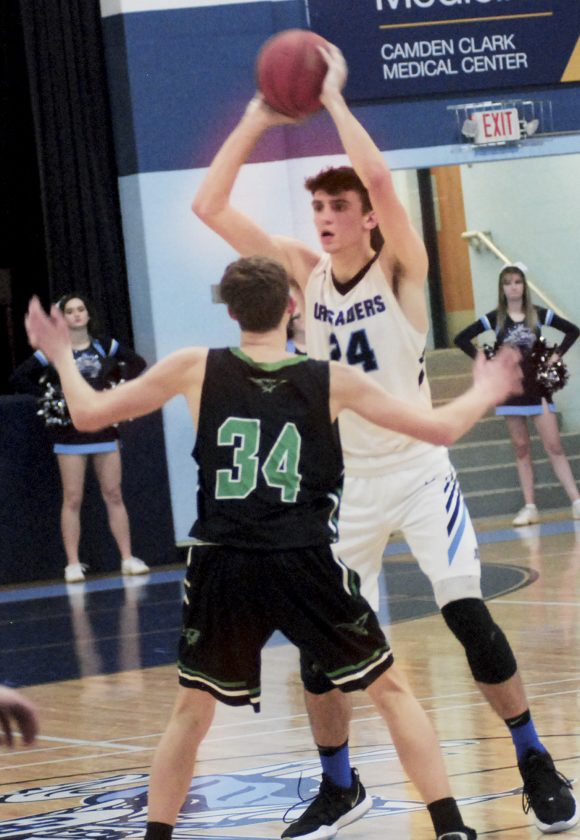 Parkersburg Catholic’s Patrick Copen looks to pass to an open teammate during a 2019-20 regular-season game against Winfield. Copen was named to the Class A All-State First Team as voted on by the West Virginia Sports Writers Association.

“It was pretty tough. We had a meeting right after school when we first heard about it,” Moles added. “That one last practice was very emotional and very tough. We had a feeling it could be our last time together as a team in the gym.”

Wheeling Central junior J.C. Maxwell and Notre Dame sophomore Jaidyn West each moved up a spot after being second-team all-staters a year ago.

The Maroon Knights of head man Mel Stephens survived St. Marys in the regional co-final to punch their ticket to Charleston for the 12th straight year. Central had the No. 5 seed and was set to tangle with fourth-seeded Notre Dame in the quarterfinals.

Maxwell put up 14 points, six rebounds and three assists per game. West filled the stat sheet on a nightly basis with averages of 21 points, six boards, as many assists and five steals.

Top-seeded Williamstown, which ended the campaign ranked atop the Associated Press poll, was set to carry a 24-1 mark into its quarterfinal showdown versus eighth-seeded Tug Valley. The Yellowjackets of head coach Scott Sauro were represented by Sam Cremeans. The junior finished runner-up in the Little Kanawha Conference Player of the Year voting and averaged 15 points, 3.6 rebounds, 2.2 assists and 1.4 steals an outing. He shot 41% from deep and made 42 triples. He also converted nearly 54% of his total field goal attempts.

Two other players from the LKC earned first-team nods in Parkersburg Catholic’s Patrick Copen and Grant Barnhart of St. Marys.

Copen, who is headed to Marshall University to play baseball, was known for his defense. The senior kept every player he guarded below their scoring average aside from Logan’s David Early.

Edwards had a 30-point game against defending Class AAA state champ University. A 76% foul shooter, Edwards knocked knocked down 52 trifectas and averaged 13.9 points to go along with six assists. May was the catalyst in helping Tug Valley reach the big dance as the Panthers eliminated Parkersburg Catholic in the regional. May put up better than 17 points a game for a Panther program which went 13-12 and played 11 games against ranked Class A or AA opponents.

Pendleton County was the lone undefeated team in single-A. The 23-0 Wildcats were led by junior Bailey Thompson, who was selected as the second-team captain. He averaged 16.9 points, 8.9 rebounds, 2.6 assists and shot 59%.

Greenbrier West finished with an 18-5 record after being upset by Mount View in the sectional. Cavalier junior Kaiden Pack, who averaged 18.2 points, was named the third-team captain.

The only other underclassman on the team was Tolsia sophomore Jesse Muncy. The other six spots went to seniors Nick Moore of Calhoun County, Hundred’s Cody Soles, Van’s David Stewart, William Steele of St. Marys as well as Trinity Christian teammates Fletcher Hartsock and Seth Goins.