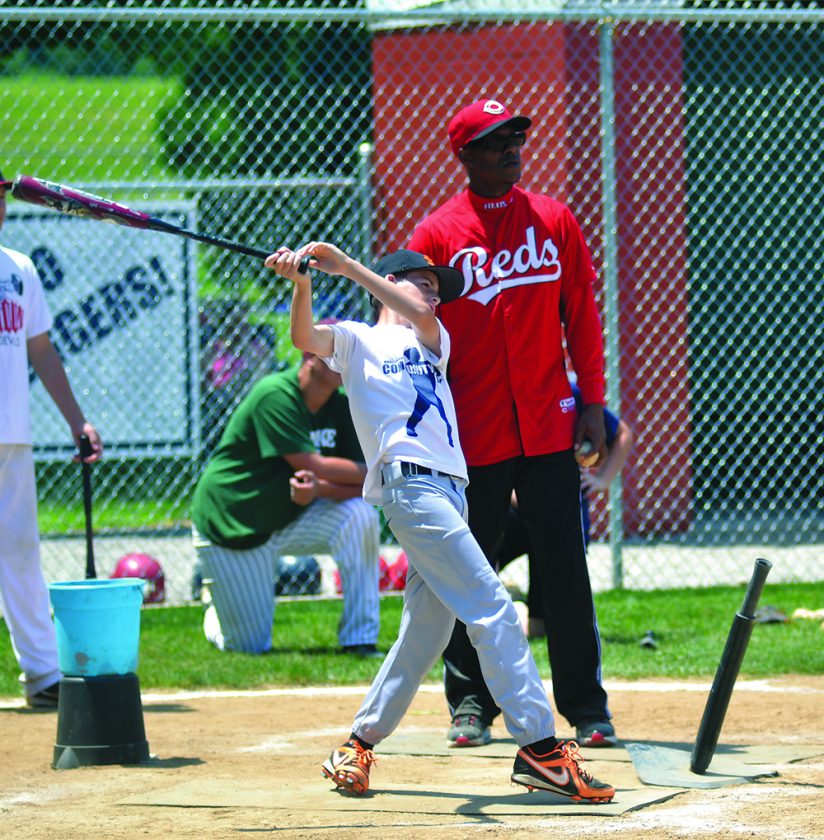 Photo by Jordan Holland Former Cincinnati Reds outfielder Eric Davis, right, offers instruction at a past Reds Legends Youth Baseball and Softball Clinic. Camp director Mike Wagner is hopeful the clinic will be able to go on as scheduled in June.

The impact of the coronavirus pandemic has been felt all over the world.

That includes the world of sports, as major events and leagues have been canceled deep into the summer, from the youth level all the way up to the pros.

One person holding out hope is Mike Wagner, director of the Cincinnati Reds Legends Youth Baseball and Softball Clinic. The camp, which gives kids the opportunity to receive baseball and softball instruction from former Reds players, is scheduled to take place on June 22 and 23 at Vienna Recreation Baseball/Softball Complex. As of now, Wagner says the camp is still a go.

“Right now we’re scheduling it for those days. There’s restrictions until May 1. Obviously if the restrictions get extended past our dates, we’ll move it back.”

It’s anybody’s guess how long it will take before the virus is no longer an issue.

The Reds Legends camp would be a nice way for young ball players whose leagues have been canceled to get to experience some baseball this year, Wagner noted.

“If these kids don’t get to have their leagues, at least they’ll have a couple days with the Reds,” he said.

Usually by this time of year, Wagner has his legends set in stone. This year with the pandemic, it’s been tougher to lock things down, but he’s hopeful to have names like Pokey Reese, Sean Casey and Stephen Larkin in attendance along with regulars Leo Cardenas and Todd Benzinger. As Wagner pointed out, though, it’s all subject to change.

“I kind of went into neutral when this all started,” Wagner said of the pandemic. “Right now, that’s where it’s at. It’s anybody’s guess.”

The camp used to focus on baseball but has added softball instruction as well over the years. Boys and girls ages 3-19 are eligible. Cost is $105 per camper, though special deals for returning campers are available.

For more information, visit www.cincinnatiredslegendsyouthbaseballclinic.yolasite.com, or contact Wagner at (740) 373-3476.

“When I started this camp, I thought we’d do it for a few years until my boys got into high school,” Wagner said. “Then it turned into 10 years, then 15, then 20, then 25. Twenty-seven years is a long time. There’s a lot of tradition, and it wouldn’t be possible without the local ball players and the local support.”

Jordan Holland is an associate sports editor for The Marietta Times. He can be reached at jholland@mariettatimes.com.

Shop Small/Shop Local event will be held in Belpre