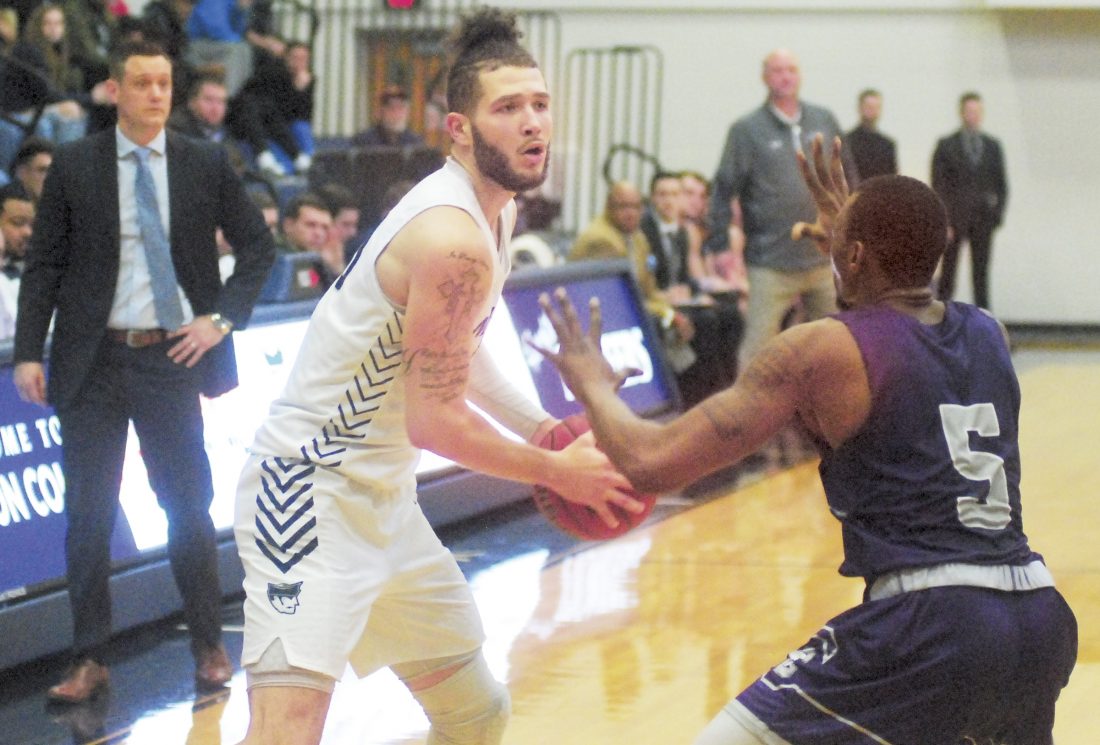 Photo by Jordan Holland Marietta College’s Mike Hall, left, makes a move with the ball during a men’s basketball game against Capital this season at Ban Johnson Arena.

MARIETTA – Jon VanderWal knew Mike Hall was a special basketball player all the way back in high school when he played for Blane Maddox’s Warren Warriors.

The veteran Marietta College men’s hoops coach recalled going to games at the Warrior Coliseum Hall’s senior year in 2015, hoping for a chance to bring the 6-foot-6 guard to the Pioneers.

“We tried to recruit him out of high school,” VanderWal said. “I went to some of Warren’s games his senior year. I knew he was probably a long shot — a kid that’s 6-6, long and athletic, usually is going to get a scholarship somewhere.”

Hall ended up signing with Concord, a Division II program. He spent a year and a half with the Mountain Lions, playing in a total of 12 games before electing to switch things up.

“We actually recruited him kind of knowing we wouldn’t get him initially, but could maybe get him on the rebound if he were to transfer,” VanderWal said. “We were fortunate enough that that’s how things transpired. We were all about it.”

He transferred to Marietta midway though the 2016-17 season and played in two games off the bench. His role increased as a sophomore as he worked his way into VanderWal’s rotation, playing in 27 total games and making six starts.

In 2018-19, the Pioneers made an improbable run to the Elite Eight in the NCAA Division III Tournament. Hall played in all 30 games off the bench, averaging 14.7 minutes and 4.1 points per game.

As a senior this winter, he was one of just two players to start all 28 games for Marietta.

He averaged 5.6 points and 4 rebounds per contest and finished with 49 assists. He transitioned from the post to the wing this season, something VanderWal praised.

“He was never a leading scorer, but he became a great defender,” the coach said. “He was athletic enough to play a lot of positions, whether it was the 3, the 4 or the 5. We asked a lot of him and he completely bought in.

“I’m glad Mike got to start every game this season. He does so many things well. Mike always brought balance to our lineup because he’s so unselfish and versatile. We he felt he earned that.”

One of only two seniors on the team’s roster, Hall developed into a leader for the Pioneers. His presence on the court and in the locker room will be missed in the future, his coach said.

“Mike Hall is a class act young man,” VanderWal said. “He’s been extremely coachable in his years here. We love him. He’s a great kid and a great teammate. He worked extremely hard and became a guy that was willing to do whatever it took to win.”

Before Hall, the son of Christi Adams and Myles Hall, became a Pioneer, he was a star for the Warren Warriors.

As a sophomore on Maddox’s squad in 2012-13, Hall was instrumental in leading the Warriors to their first ever district and regional championships and a trip to the Final Four. They lost to St. Vincent-St. Marys in the state semifinals at the Jerome Schottenstein Center.

He finished his career in royal blue and white with more than 1,000 points. As a senior, he was the Southeastern Ohio Athletic League’s Player of the Year, the district Player of the Year and a second team All-Ohio honoree.

“Michael had come in to us as a freshman,” Maddox recalled. “That sophomore year, a 6-4 guy that could pass the ball, play the post, scored for you, create buckets for others — it was just invaluable. We were fortunate we could put several people like that on the floor that year.”

Maddox concurred with VanderWal’s assertion that Hall was unselfish.

The longtime Warrior coach wasn’t surprised to see Hall have success in college.

“It was wonderful to see him continue his basketball career in college and just watch his maturity grow,” Maddox said. “I’m happy for him and his family. I’m glad to see his career go the way it did. I know he’s happy and I’m happy for him.”