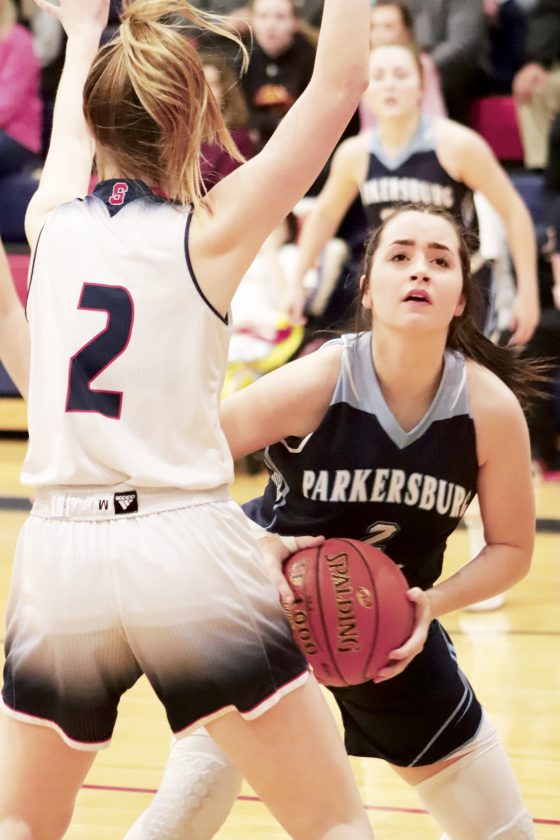 Photo by Joe Albright Parkersburg Catholic’s Paige Stotts works down low against Parkersburg South’s Hannah Wingrove during a 2019-20 regular-season game. Though slowed later in the season by an ACL injury, Stotts showed improvement this season and will be a big part of the Crusaderettes piecing together the production of departed point guard Madeline Huffman next season.

PARKERSBURG — Marty Vierheller’s Parkersburg Catholic girls basketball’s well-oiled machine ran through point guard Madeline Huffman the last three seasons. Her leadership not only helped the Crusaderettes to a collective 97-3 record over the 100 games of her high school career, but it also aided in the growth of her teammates.

Whenever Parkersburg Catholic’s graduation ceremony occurs, her skills and talent will walk across the stage with her to Fairmont State. Left in this wake is seemingly the only hole Coach V and company must fill headed into the 2020-21 season.

Assuming everyone on this past season’s roster returns, it may appear easy to slot someone in at point guard then move on. But, the belief would be wrong.

This simple move sets off a chain reaction throughout the starting lineup. Another player then must step into the vacated spot of Leslie Huffman or Aaliyah Brunny upon either being named the new floor commander. This player also must replace the production from one of two teammates likely among the immediate favorites for the next Little Kanawha Conference Player of the Year trophy. So, Madeline’s loss factors in as a conundrum on more than one level.

And while Coach V knows plugging someone in and hoping for the immediate replacement of everything Madeline brought to the table is a long shot, it is unlikely he alters much in the way the Crusaderettes played with her at the helm.

“I don’t think our girls knowing the success we have had will be all too anxious in changing a lot. The biggest thing will be trying to do many of the things the same way we did with different players filling different spots,” said Vierheller.

One of the benefits of the Crusaderettes small roster comes into play here. As there were at most ten players on the team this season, athletes like Madison Ross, Jenna Boice, Debra Hardbarger, Lainie Ross and Paige Stotts all moved around the court according to team need. “It made who we have coming back more versatile,” said Vierheller.

The musical chairs added confidence to each player in their expanded repertoire of abilities as well. “Everyone actually improved,” said Vierheller. “I think the player that made the biggest strides toward the end of the season was Madison Ross. You could tell she wasn’t playing her best basketball until the last third of the year.”

Factoring in the return of Brunny and reigning LKC Player of the Year Leslie Huffman is another bonus in itself.

“I think those two already have so much good chemistry between them and they picked up Madeline’s ability to utilize everyone’s talent and now it just permeates the team,” said Coach V.

Changes to the regional alignment mean a team like Parkersburg Catholic also may have an edge over fellow sectional members Ritchie County and Williamstown. The Yellowjackets bidding farewell to their top scorer along with Dave McCullough’s inability to keep freshman scoring sensation Rebekah Rupert a secret anymore puts added pressure on the two teams. Assuming the West Virginia Secondary School Activities commission keeps the same format of two regional co-champions headed to the state tournament, earning an extra day of rest from the No. 1 seed bye alongside a sectional championship home game could significantly boost a teams chances of advancing to Charleston.

This versatility is another reason Vierheller isn’t losing sleep about the possible absence of the three-week period and summer ball due to the COVID-19 pandemic.

“It wouldn’t shock me if we lost the entire summer. But I think we also have a bit of an advantage coming back because of our experience. We won’t have to hit the panic button,” said Vierheller.