Williamstown boys ‘did some special things’ this season 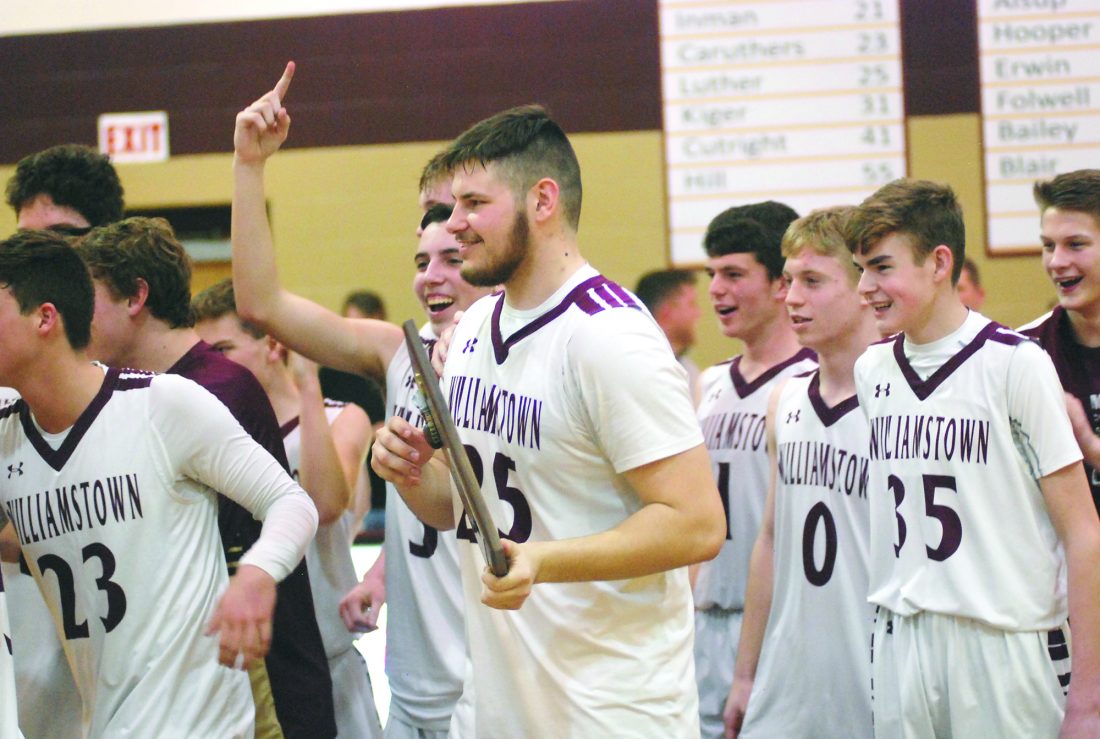 Times file photo Williamstown’s Colten Luther celebrates with teammates following the boys basketball team’s Class A, Region IV co-final victory against Van. Due to the COVID-19 pandemic, Williamstown never got the chance to compete in the state tournament.

There were four specific championships the team had in mind.

Williamstown checked the first box on Feb. 22 when it defeated Webster County 70-54 in the Little Kanawha Conference Night of Champions first-place game.

Two weeks later, the ‘Jackets bested rival Parkersburg Catholic 64-42 in the Class A, Region VI, Section 1 final. It was Williamstown’s third win of the season over the Crusaders.

Then, on March 11, WHS checked off box No. 3 with a 74-50 trouncing of Van in the regional co-final, punching its ticket to the state tournament.

Unfortunately for Sauro and the Yellowjackets, and teams all around the country, the state tournament never happened. Williamstown never got the chance to check off the fourth box, as the COVID-19 pandemic forced the cancellation of all sports.

“We were three for three and that was great,” Sauro said. “That’s something the kids can hang their hats on. We’re just disappointed we didn’t get the chance to compete for the fourth one.”

“We had a meeting shortly after they shut everything down,” Sauro recalled. “I tried to be honest with them about what this pandemic meant as far as our chances for playing. I told them it was very unlikely.

“When the announcement finally came, obviously it was disappointing. These kids had such a great year and were looking forward to the chance to compete for a state title. We understand why the decision was made, and we agree with the decision, but we’re still just disappointed.”

Having the state tournament get wiped away would be crushing under any circumstance, but there’s a little extra sting for the Yellowjackets. It seemed everything came together this season for Williamstown, which was on track to bring the program its first state title since 1962.

“It just speaks to how special of a group these guys were,” Sauro said.

When asked what made this team so special, Sauro replied, “We had a lot of pieces to make a run. Consider the size we had. We were a really big single-A team. Consider their skill in shooting the basketball. We had four or five guys shoot over 40% from 3. When you get that mix and combination, obviously you have a chance to do something special, and I think we did some special things during our season.”

The Class A field at the state tournament was expected to be competitive. Williamstown posted regular-season wins over fellow qualifiers Magnolia, Wheeling Central and Tug Valley. Their only loss of the season came on the road against a tough Fort Frye team. That loss showed the Yellowjackets some things they needed to improve on, and they responded with a dominant tournament run leading up to Charleston.

“They were feeling great,” Sauro said of his players. “They were excited to go play. They were confident, and they should have been confident. They beat a lot of really good teams. They were really looking forward to it, and not just for themselves. All of them wanted to be a part of the team that won that first Williamstown state championship since 1962.”

Having said that, Sauro had no animosity over the decision to cancel.

Though no state champions were crowned in West Virginia this year, Sauro’s squad can take some solace in knowing how media and coaches around the state felt about them.

“We were ranked No. 1 by The Associated Press for close to two months,” Sauro said. “When it came time for coaches to rank, they ranked us No. 1 as well. When you consider that, obviously we would’ve rather played, but the fact that respect was shown, that’s something the kids can take away and feel good about.”

Sometimes teams loaded with talent don’t succeed because they don’t put in the work. They think they can get by on talent alone. That wasn’t the case with this Williamstown squad.

“One of the things coaches worry about with a talented team is they’re not going to come in an give that effort in practice,” Sauro said. “But they did. I appreciate the way they approached the season as a whole and each individual game. They were talented, but it was really great to see them put in the work. The result was we won a tough conference in pretty dominant fashion.”

Though Williamstown loses five key seniors from this group, there is a strong nucleus coming back that will now be hungrier than ever to get back on the court.

“We feel great about these guys we have coming back,” Sauro said. “We have four guys we know are going to play a ton. Sam Cremeans is going to be a returning first team all-stater. Xavier Caruthers will be back, and I thought he could’ve been first team all-state as well. Garret Hill is one of the best point guards in the state, regardless of class. Baylor Haught is a coach’s dream. He does anything you ask and plays his butt off. We have some good sophomores and guys we think can play. There’s going to be opportunities for kids, we just have to see what the offseason brings.”

There are a lot of question marks regarding the offseason right now. Sauro mentioned there’s usually spring tournaments going on this time of year, but nobody is playing right now due to the pandemic.

“It feels like everything is in a holding pattern right now,” he said. “We just don’t know. It’s an awkward time.”