Jillian Middleton back on the mound, preparing for Ashland 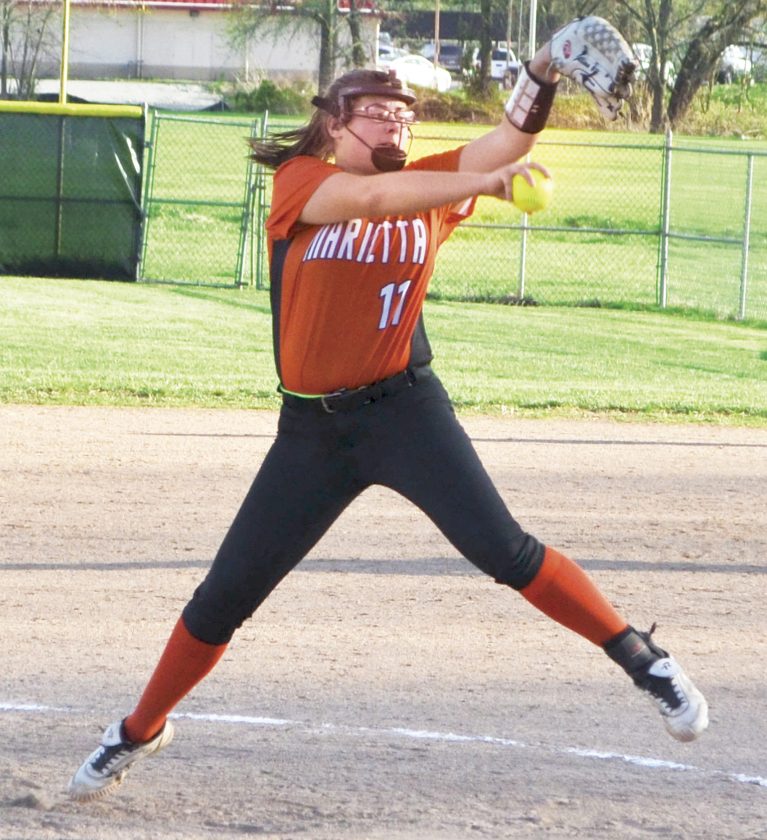 File Photo Marietta High graduate Jillian Middleton prepares to release a pitch to a Warren batter during a 2018-19 regular-season game. Though COVID-19 thwarted her final high school season, Middleton continues to prepare to pitch for NCAA Division II school Ashland University through her time with the AAU Outlaws.

Her pitching numbers from the 2019 fall league with AAU team Outlaw Parsons pointed to one more monster season in 2020 with the Tigers, at least on paper. “Three runs was the most we gave up in a game and we played a pretty hard schedule with her on the mound,” said Outlaws’ coach Jason Parsons. “Jillian brings out the best in her teammates and doesn’t leave the ball in the wrong places. We played a good Bandits team where every kid on that team was going Division I and she was rock solid.”

All of this success set her up at a shot to break multiple MHS records in ’20 in theory. Those school records have been lost. So no one knows for sure.

Even if the numbers were found, COVID-19 axed those chances.

But, the pandemic failed to erase the optimism that the Tiger graduate would not be going an entire calendar year without one climb onto the mound for live game action.

“I definitely always had hope through it all,” she said. “I prayed things would die down and we would get back for at least some season. Then things were starting to open back up and I kept myself in the mindset of playing and never came to terms we wouldn’t.”

The competitive voice in Middleton’s mind helped keep her ready for one last prep hurrah. All the trips to Marietta’s Movement Fitness and her weekly Sunday pitching lessons didn’t serve only as early work in preparing for next spring at NCAA Division II Ashland University, the voice told her. Those hours spent hurling into nets and working on her pitches possibly brought with them another, more immediate reward: She’d actually get to pitch this year on top of spending one more summer with her friends.

And two weeks ago, the AAU season officially began. Her long awaited opportunity to get back in the circle came with it. “I told my dad he couldn’t be mad at me at how the first tournament went. Pitching practice is totally different from an actual game. And I hadn’t really had anybody to pitch to during the time off, either,” she said as she faced live hitting for the first time in seven months.

But as it turns out, she didn’t need to worry.

Parsons didn’t want to overuse his three pitchers after so much time off. So his limit of three innings in pool play kept each one healthy for eventually more work as the summer progressed. This decision eased Middleton back into her mound routine. Parsons then unleashed her upon teams stacked with college talent when championship play rolled around on Sunday.

The results were clear.

She had not missed a beat.

The fast ball blazed, the drop ball plummeted, and the junk balls made bats flail.

She gets another test this coming weekend. The competition the Outlaws face at their own showcase in North Ridgeville, Ohio, features some of the top competition from California and Missouri, among other states. “Our event really is a good measuring stick because it draws so much talent,” said Parsons.

He is glad Middleton can be called upon for his group, too. “There are just no drawbacks to coaching her whatsoever, she is a kid you want to coach,” he said.

‘These last few games also are going to help her prepare for the college level as she goes from playing on a team with 13 girls to playing on a roster with 25 girls,” said Parsons.

Mostly now Middleton is critiquing her technique to give three sophomores pitchers a run for their money next spring.

And she sounded confident in accomplishing her goal of taking the ball as much as she did in high school.

“I know I will get to start but I want to beat the sophomores out and be the ace. My mindset coming in is that I am better than these girls and that helps the team all around,” said Middleton.