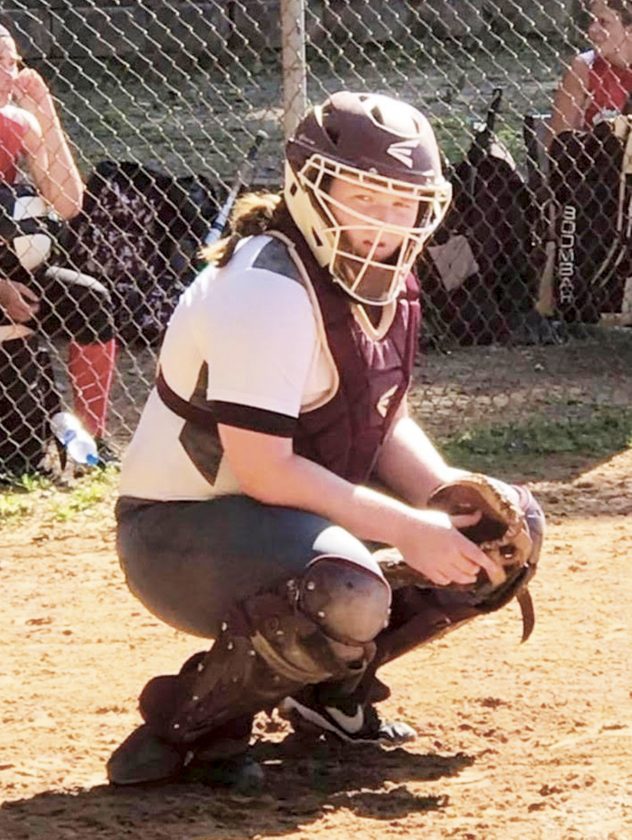 Photo provided Williamstown catcher Alexis Schreckengost looks for the signs before signaling to her catcher during a 2019 regular-season game. Schreckongost along with five other experienced seniors may have graduated, but the Yellowjackets and head coach Ron Stanley stand ready to get back to work.

WILLIAMSTOWN — Ron Stanley and his Williamstown softball team received a rude awakening upon hearing the 2020 season had been canceled because of the coronavirus pandemic.

As the team believed the initial shutdown would last just two weeks, numerous types of equipment from bats, nets and balls were handed out to every wanting team member so they could continue working at home in anticipation of contributing to another competitive season in Class A’s Region IV.

But when the West Virginia Secondary School Activities Commission officially announced the end of the season, the group took the hit hard. The decision, leaving six seniors planning to be large contributors facing an abrupt end, caused a lot of pain.

“It was a huge blow,” said Stanley. “We had all this young talent coming up and none of it got to spend the year with the seniors, who had so much to offer. They (the seniors) performed the fundamentals of softball so well and when younger players see older players doing it well every day throughout the season, it grows on them. I really hate to see the seniors not get to play their final season.”

And while the loss of so much experience may cause a hindrance to other coaches and programs, the fresh injection of talent from Williamstown’s middle school softball program leaves the team in a good position to replace its losses.

Ten freshmen and sophomores will now help Natalie Sawin, Grace Everly and Hallie Landis continue the team’s consistent climb in the smallest classification. The problem comes in discovering exactly how those underclassmen will help. Stanley’s limited knowledge base on his young players keeps him from being able to fully answer this question right now.

Sure, the deeds of a few of the newcomers made their way through to the coach’s ears. Sophomores Lindsey Keller (pitcher), Cameron Haynes (catcher) and Cameron Beck (out field) will fill some of the holes, but they won’t complete a nine-girl line-up or fielding group.

Graduated all-Little Kanawha Conference catcher Alexis Schreckengost left big shoes to fill, but Stanley praised Haynes for her efforts in preparing for the role. “She is so easy to coach and I look forward to seeing what she can do next year behind the plate,” he said. If her last name sounds familiar, it should. She is the younger sister of former Jacket quarterback Carter and according to her head coach brings the same kind of athleticism to the group.

Keller joining Sawin on the mound completes a little more of the pitching picture, while Beck’s ability to “to work her butt off,” gives the Yellowjackets another piece of the puzzle wherever she ends up.

But the Yellowjackets are like every other team in the state in regard to the three-week period coaches can meet with players in July: They look forward to it.

“It is exciting especially when you are at the unknown,” said Stanley. “Some girls practice well and then get out on the field and are completely different or vice versa.

Though some of his team may not experience these during the free period as they participate in other sports, Stanley takes comfort knowing any of his athletes will be working now instead of picking up the game again come the early parts of 2021.

“Our best athletes are the ones who play multiple sports, but it is all good no matter what sport they are playing. I would rather have an active athlete then someone who picks the glove up in March and February. It is good they are associated with different sports.”

If and when someone misses a practice it won’t hurt their chances at acquiring a starting spot either thanks to Stanley’s coaching approach. “I have always started the season without starters because you have girls that have certain skills and they play where the team needs them to play. As we develop through the season positions and batting orders change and by mid-season we have our best nine out on the field as we are preparing for sectional play.

“It keeps the competition between the girls going. Everyone knows that that one spot could be their spot.”

“It is a good feeling to know the athletic talent coming up. My only apprehension is our depth and our numbers will be low. But every year you are thrown curve balls whether transfers, injuries, or players trying other spots and you never know what you are going to have until the season starts. It is like playing poker. You are dealt a hand of cards from the coaching deck but I think we have good enough players to have a pretty good poker hand.”