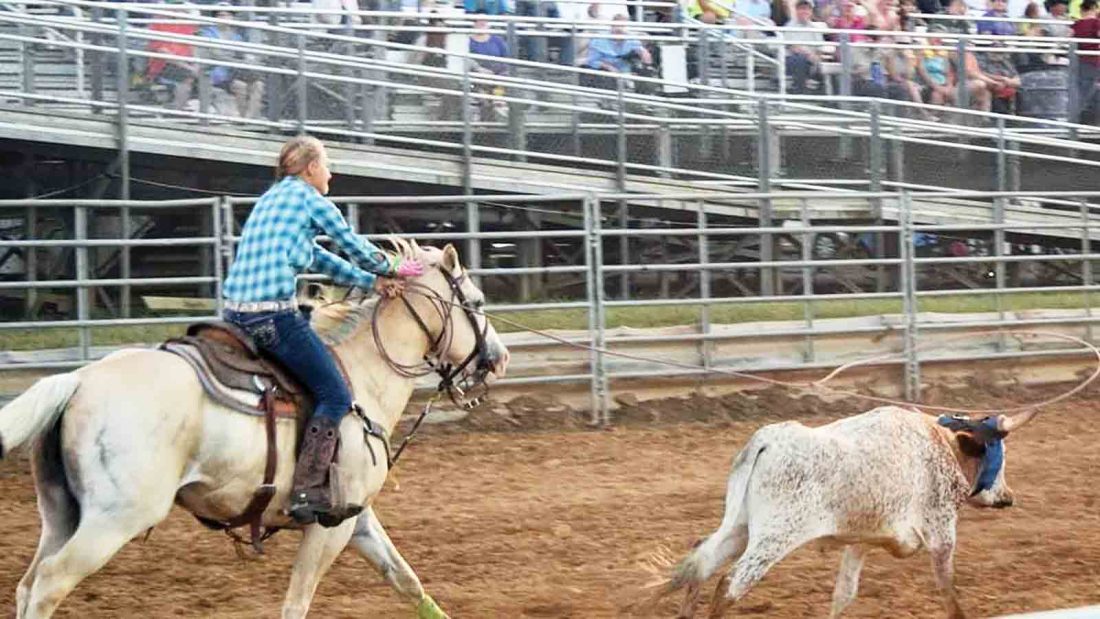 Courtesy photos CJ Crim, a Fort Frye graduate, competes in a rodeo competition. Crim has qualified for nationals, which will take place July 17-23 in Guthrie, Okla.

BEVERLY — While some kids her age will be relaxing for the summer, CJ Crim will be competing in rodeo on the national stage.

Crim was first in breakaway roping and third in team roping at regionals, earning her a berth at nationals. Nationals will take place July 17-23 at Lazy E Area in Guthrie, Okla.

“I’m ecstatic,” Crim said. “It’s something I’ve been working for for a long time.”

Crim, who just graduated from Fort Frye High School and the Washington County Career Center this spring, plans to attend the University of Findlay to obtain a Doctorine in Physical Therapy. She’s been active in Student Council, SkillsUSA, 4-H and the National Technical Honor Society.

Crim’s done rodeo competitively since around 2010, but “she’s been around horses her entire life,” said Doris Crim, CJ’s mother. “She started out as a mutton buster, which are kids who ride sheep around the arena, kind of like bullriding. She did that at 4 years old.”

Crim actually has qualified for nationals before. She went when she was in eighth grade and described the experience.

“It was very nerve-wracking but also very fun and very educational,” she said. “It really shows the drive that people have to get to the point they’re at.

“Performance wise, I did not do very well. I didn’t make any qualified times.”

With that experience under her belt, Crim is feeling much more confident this time around.

“I’m hoping to win the short and bring home the national title this year,” she said. “I know to expect that they’re going to be roping fast. The best way to win is to rope fast and rope clean.”

A lot of time and effort goes in to getting to Crim’s skill level.

“For nationals, it’s not a whole lot different from what I would normally do,” she said. “It’s practicing a little heavier and a little longer. Getting up at about 5 to get out while it’s still cool, run a calf, sleds, get the horses worked before it gets hot. Then come back in the evening around 5 when it starts to cool off.”

Crim will be taking a horse that she’s personally trained. She explained the advantages and disadvantages of competing with your own horse.

“The bond will be there, the team work and knowing how to work with each other,” Crim said. “But it’s also tough competing against horses that have been professionally trained. It’ll be a proud moment to be able to say I was able to take something I made out.”

Her relationship with her horse can be a touchy subject, Crim laughed.

“It’s about 99% love and 1% hate,” she explained. “Sometimes you get the days where she has a marish attitude or a toddler attitude. But she is always eager to please. Whatever I ask her to do, I know she’ll do it. She really trusts me and allows me to put a lot of trust in her. She has a big heart and always willing to learn something new even if it may be scary.”

Throughout her career, Crim has won her fair share of rodeo related awards. In 2012, she was named Youth Rodeo Queen at Rocky Ford. She pointed to her biggest accomplishment as “when the horse I trained qualified me for The American, the largest rodeo payout in the United States.”

Crim said she does plan to continue competing once she gets to college.

“Hopefully I can compete on the school’s ranch riding team,” she said

With nationals nearly a month away, Crim is ready for whatever the competition will bring.

“There’s 1,500 contestants, from the United States, five Canadian provinces, Australia and Mexico,” she said. “You’re learning to compete with a whole bunch of different styles. You have to know how to be strong in your own style.

“It’s going to be tough without a doubt, as the other competitors are very strong competitors. Everybody’s had to work really hard to get there. With the right mindset, I can bring it home without an issue.”

Crim and her family will be traveling to Oklahoma via truck and trailer.

“She’s her hardest critic, and her dad and I would follow under second and third,” Doris said. “She’s very dedicated and makes me very proud as a mother.”

CJ gave recognition to everyone who’s helped her get to this point.

“I want to thank my family for being able to get me up and down the road, as well as my rodeo family,” she said. “They may not be blood, but they’re close enough. My good friends for helping me through thick and thin, and my church family for helping me keep my faith strong. I want to thank Bill and Wanda Maghes for letting me use their horses and giving me a place to practice. And the Father above, for always keeping me on the right path.”