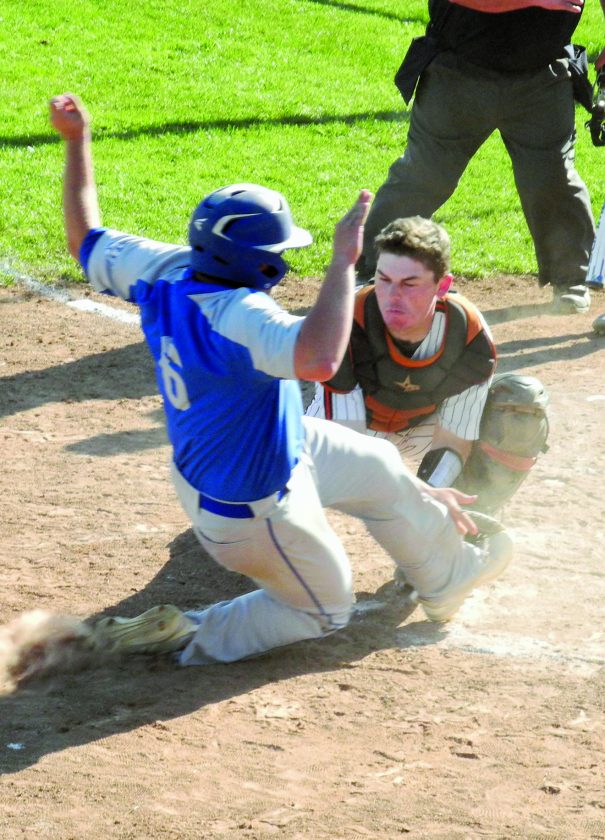 Times file photo Marietta’s Justin Thompson, right, tags out a Warren player during a high school baseball game last season at Legion Field. Thompson is one of several players who will compete for the U-19 Marietta baseball team this summer.

Fans who have been craving baseball since March will have a chance to watch U-19 Marietta in action at 5:30 p.m. today when the team plays host to New Martinsville.

The club is coached by Larry Hiser, the head coach for Marietta Post 64. Because the legion season was officially canceled due to COVID-19, Hiser helped form U-19 Marietta.

Mark Duckworth Sr. helped produce a schedule for the senior and junior teams. The senior club opened up Friday at Cambridge for what Hiser called “just kind of a game to see what you’ve got. We had nine pitchers throw one inning. They were remarkably accurate. We only walked one batter in nine innings. I was impressed with how our kids players.”

Hiser said the team is technically 1-0, but there are no standings, no district seeding and no postseason tournament. It’s just an opportunity for kids to play some baseball this summer.

“We hung on as an organization as long as we could after legion baseball canceled their season,” Hiser said. “We kept following the governor’s press conferences, and when he announced the release for baseball on May 26, we got together and within a week or two we had a full schedule. We’re going to try to teach the game, let guys work on their game and get something productive out of this summer that guys can take to their high school or college team next season.”

The team’s schedule features clubs from all around Ohio and West Virginia, including Parkersburg, New Philadelphia, Meigs, St. Clairsville, Waverly, Ripley, Steubenville and Wheeling. Marietta also will take part in a pair of tournaments at the end of June and beginning of July. From June 26-28 the team will play in the Coshocton Tournament, and from July 3-5 it will participate in the Cambridge Tournament on the Fourth of July weekend.

All of the team’s home games, starting today, will be played at Marietta College’s Don and Sue Schaly Field at Pioneer Park. Included in Marietta’s senior schedule are nine doubleheaders.

The team will have to take some extra precautions as part of the Ohio Health Department’s guidelines. Hiser discussed some of the changes.

“We’re trying to set up drills where we’re not too close together,” he said. “No sharing of bats and helmets, having their own water supply, hand sanitizer everywhere and keeping their hands clean. Really the only time anyone is close together is at the plate with the batter, the catcher and the umpire.”