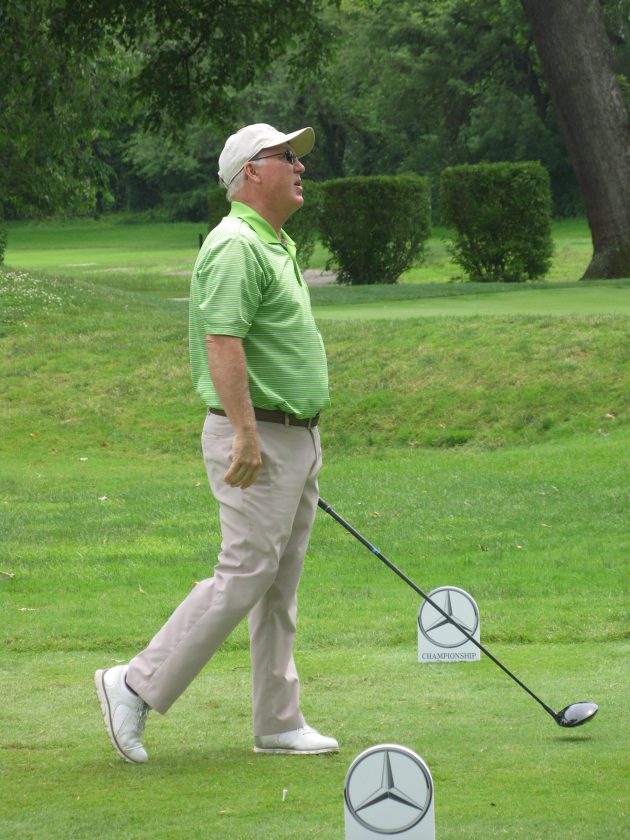 Photo by Jay W. Bennett Ty Roush watches his tee shot during the 86th West Virginia Open last June at Parkersburg Country Club. Roush will be out to defend his W.Va. Senior Open crown on Sunday and Monday back at PCC.

VIENNA — Mason’s Ty Roush needed a 4-under par 68 on the final round at Stonewall Resort last year to win the West Virginia Senior Open championship by a single stroke over three-time champ John Ross.

Roush, who is set to tee off at 1:30 p.m. Sunday in the opening round of the eighth annual event held at Parkersburg Country Club, knows repeating is going to be anything but easy.

“I’ve been either first or second but one year. I’ve played good in it. I’m not hitting the ball very good right now. Pat Carter is going to be hungry because I beat him and John Ross last year.”

Despite being the defending champ, Roush doesn’t necessarily think he’s the favorite.

“I’m just going to wing it. I’m probably an underdog,” he said. “Pat’s going to be ready. He’s going to be hard to beat probably, but we’ll see.

“Anything can happen. I have not even been playing at all with this coronavirus. I’ve just been trying not to have our course go under (Riverside Golf Club).”

Roush along with his father Gary and brother Mitch own the golf course in Mason.

“Everybody quit playing there through April. They got scared, but now we’ve been packed lately and it’s coming back,” admitted Roush, who added of the two-day tournament “whatever happens, happens. I’ll just do my best.”

Scott Davidson, the head pro at Parkersburg Country Club, is excited for the opportunity to conduct the championship.

“This is the first time we’ve hosted it and it’s their first championship of the COVID era,” quipped Davidson while adding the course “is really good.

“The competitors are going to be in for a treat. It should be a good test. These guys can play. I don’t care if they are 50 or not.”

Brad Ullman, the executive director of the West Virginia Golf Association, expects to see some solid golf on Sunday and Monday.

“The field is up to 63 and we’re excited to have that many,” Ullman stated. “It’s going to be one of our larger fields since we’ve started this and it’s going to be a good pro field.

“The only amateur to ever win the senior open in the short time we’ve had this championship is Steve Fox (2014) and he’ll be in the field as well.”

Along with the championship flight, golfers can also opt to compete in the gold or silver flights.

“We want to make sure we are promoting amateur golf and in this case senior golf,” Ullman added. “If you advance a little more in age or your game isn’t set to compete with the best senior golfers in the state, they can play from a different set of tees.

“They can play for gift certificates and prizes as well. It gives an opportunity to get more people involved. Throughout all of this (pandemic), it was our hope that golf could continue to be an outlet for people to maybe get away from the craziness of life.”

Coming off a successful 86th W.Va. Open as the host site last summer, it was a no-brainer for Davidson and PCC to conduct this event when they were asked.

“The fact we can do it on a Sunday, Monday gives the players a chance to play a tournament without taking too much time off,” Davidson added.

“It really doesn’t interfere with our member play at all. It was an easy fit for us and our golf course always peaks the first to third week of June. That’s when we are in the best shape. They are going to enjoy themselves.”

Pairings for the opening round of Sunday’s 8th annual