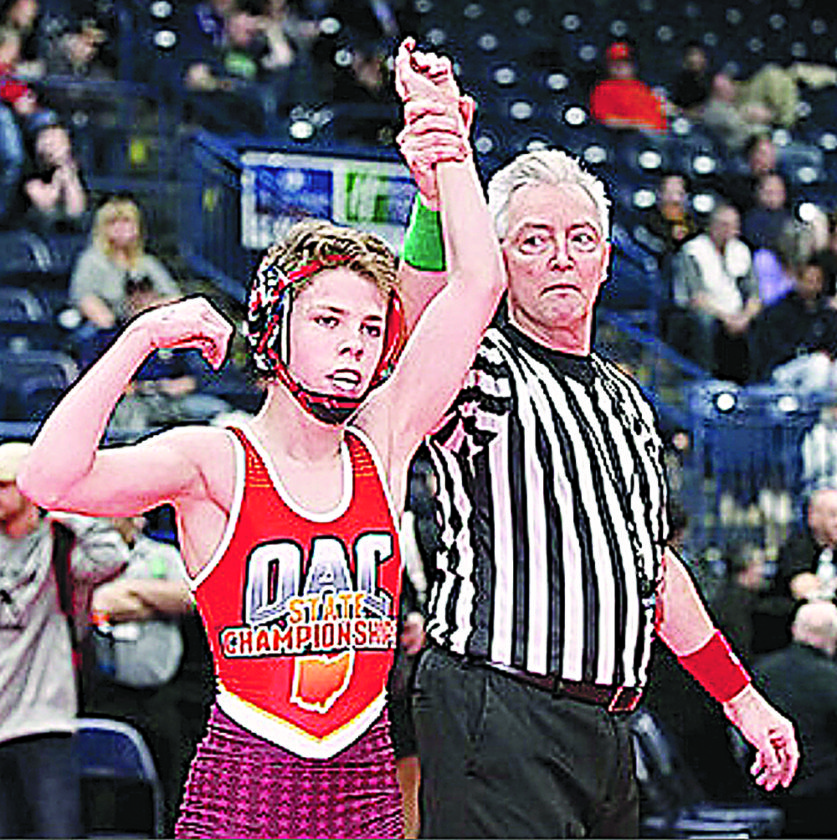 Warren’s Peyten Kellar was scheduled to compete in the United States Marine Corps Cadet Nationals this month in Fargo, N.D., but had to sit out the event due to a shoulder injury. Photo provided

VINCENT — Of all the bad luck.

Peyten Kellar had qualified and was scheduled to wrestle this month in the US Marine Corps Cadet & Junior Nationals (also known as the Fargo Nationals) in Fargo, ND.

But a couple of days before the 14-year-old grappler was to travel to the Flickertail State (North Dakota’s other nicknames are Peace Garden State and Roughrider State.), he injured his right shoulder in a training session at Ohio Northern University in Ada.

“Peyten is one of the top-ranked kids in his weight class (100 pounds) and has wrestled all over the country,” said Warren High head wrestling coach Jim Rhodes. “Fargo is one of the premier tournaments around, and it’s a tournament you have to qualify for and then get invited.”

About mid-May, Kellar punched his ticket to the Fargo Nationals at Otterbein University in Westerville. There, he was first in Greco and third at Freestyle.

There were two other qualifiers for Fargo in the Central regionals in Michigan, May 19-20, and UWW Cadet & University Nationals in Akron June 1-4.

“I had to go pick Peyten up at Ohio Northern last Tuesday (July 11), and he was pretty upset that he didn’t get to go to Fargo,” said Michelle Kellar, Peyten’s mom. “This is his first major injury, and now we’ll be headed to Ohio State University (July 26) to have the shoulder checked out by a doctor.”

Michelle Kellar is hoping that her son’s injury is “minor.”

“Peyten’s a pretty funky and flexible wrestler,” she said. “We’ve always jokingly said that he has no bones. But I guess we can’t say that now.”

In the meantime, the younger Kellar has been just “hanging out and watching the Fargo event (on the Internet),” according to his mother.

Kellar is from a wrestling family. One of his brothers (Hueston) competed at Parkersburg South several years ago. Another (Liam) is currently a junior captain on the Warriors team.

This year, Liam will also have Peyten as a teammate. Peyten is expected to compete in the 106-pound weight division.

“Peyten will be a freshman this fall at Warren,” Rhodes said. “He’s a multiple-time junior high state champ.”

“I believe he had a legitimate shot to be the first freshman state qualifier at Warren,” the Warriors boss added. “I got him in Ironman this December, a very high honor for an incoming freshman. Ironman will be a three day meat grinder of top wrestlers from all over.”