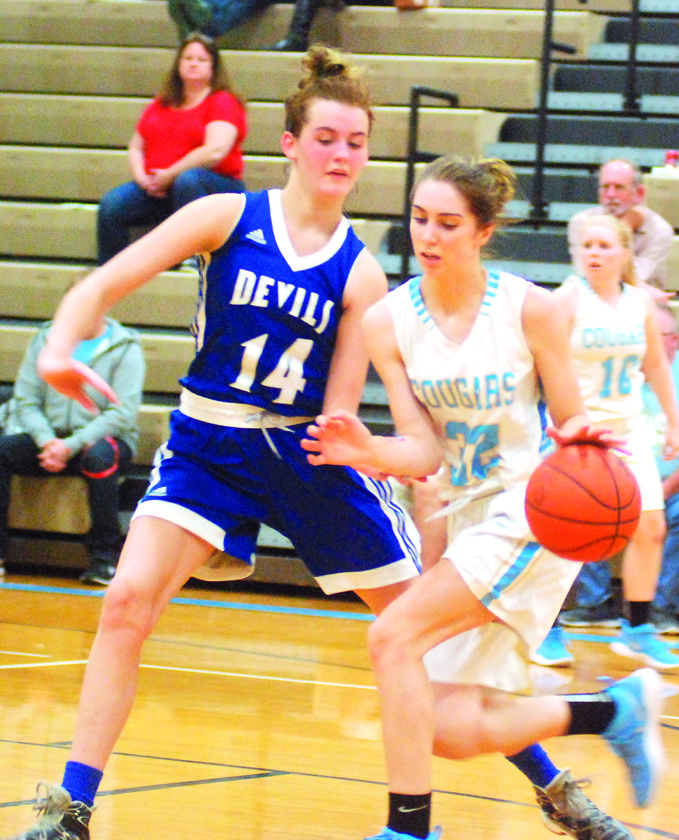 NEW MATAMORAS — Beallsville was in the mood for a bit of a payback Tuesday evening when it made the trip to Frontier High School to take on the young Lady Cougars.

After being blown out of both games against Frontier last season, the Lady Devils returned the favor by rolling to a 61-36 win to improve to 2-0 on the young season.

Olivia Munci tossed in a team-high 15 points to lead four Beallsville girls in double figures as the Lady Devils jumped out to a 19-point halftime lead and then fought off a strong third period by Frontier to drop the Cougars to 0-2.

“They beat us up pretty good last year so we were definitely looking for a little revenge,” said Beallsville head coach Tori Jarrett, whose team came out on fire by scoring 21 first quarter points. “We were a very young team last year and were gaining experience and that experience paid off tonight.”

The Lady Devils relied on strong post play from Ashley Howell in the opening period as she scored all 12 of her points as Beallsville pulled out to a seven point lead.

Howell was the beneficiary of some outstanding high-low basketball as five of her six field goals came on assists from her teammates.

In fact, Beallsville totaled 21 assists on their 26 field goals in the game.

“We are fortunate to have a whole bunch of girls that know the game well and have mutual trust in one another,” said Jarrett, whose team was led in assists by Dagan Hossman and Ashley Loudon with seven and six assists respectively.

Things may have looked even worse for first-year Frontier head coach Mike Cisler and his Lady Cougars if it weren’t for senior Kylie Daugherty who scored 10 first quarter points after opening the season with a career-high 46 points Saturday against Shadyside including a team-record 10 triples.

Bellaire opened up their first double-digit lead of the game early in the second quarter on back-to-back buckets by Jordan Gabel and after a Abby Eddy field goal cut the lead back to nine, the Lady Devils out-pointed the Cougars 11-1 the rest of the half to claim a 36-17 lead at the break.

Cisler felt like his team came out of the gate a little bit sluggish.

“I just didn’t feel like we were mentally prepared to play at the beginning of the game,” said Cisler. “Give Beallsville credit as they are a very good team but we have to be ready to go right from the start.”

With Daugherty being the lone letter-winner returning this season for Frontier, the young Lady Cougars could have easily went through the motions in the third period but that was anything but the case as they out-scored Bellaire 17-14 in perhaps their best eight minutes of the young season.

After allowing Beallsville to open the third period on an 8-1 run to push their lead to 26, the Lady Cougars scored 16 of the final 22 points of the quarter including Daugherty’s triple at the buzzer to cut the lead to 50-34.

“We made some adjustments at halftime and our girls really battled,” said Cisler. “We really played good defense and rebounded the ball well in the third quarter.”

Frontier out-rebounded Beallsville 48-36 in the game with freshman Logan Haught pulling down a team-high 13 while Daugherty and Eddy totaled nine apiece.

“I thought Abby Eddy really gave us a great effort off the bench and did a great job rebounding,” said Cisler. “We all just have to keep working like that.”

Frontier got a bucket from freshman point guard Haley Bills to open the final period but Beallsville scored the final 11 points of the game to go on to the 25-point win.

Joining Munci in double figures for Beallsville were Gabel and Loudon with 14 and 13 points respectively while Howell completed a double-double by pulling down a game-high 15 boards to go along with her dozen points.

Daugherty finished with 15 points for Frontier while Bills added nine.

The Cougars made good on just 13 -of-63 field goals, something they will need to improve upon drastically as the season unfolds.

“We just need to find someone to step up to take a little of the pressure off of Kylie (Daugherty),” said Cisler, whose team remains home Saturday when they host Monroe Central. “We’ll just keep working and it will start to come together.”