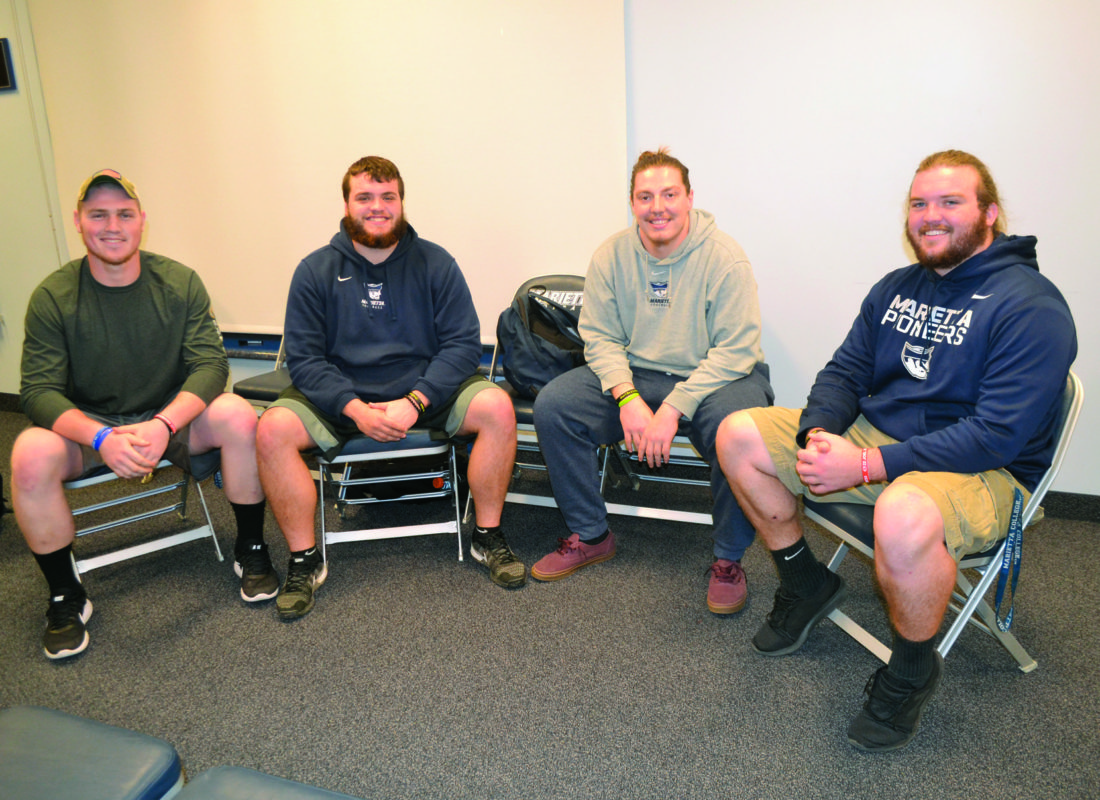 RON JOHNSTON The Marietta Times From left to right, Payton Henderson (right tackle), Brendan Mullholland (center), Anthony Jalowiec (left guard) and Caleb Riggleman (left tackle) help make up Marietta College’s offensive line. The Pioneers are second in the Ohio Athletic Conference in rushing yards per game and are 6-3 this season, due in large part to the success of the guys up front.

Caleb Riggleman is a very personable young man off the gridiron.

On it, the 6-foot-3, 270-pound Marietta College junior football player is very competitive and one heckuva left tackle, who would move “heaven and earth,” so to speak, to spring standout Pioneer running back Roger Walker for a ground gain, or protect star quarterback Darrien Fields in the pass pocket.

“They’re a blue-collar group,” said fifth-year MC head football coach Andy Waddle. “They’re very physical. Our coaches in our league certainly respect that group and what they’re able to do. It’s maybe not a group that’s flashy, but I don’t know if any offensive line is flashy. They’re certainly not huge, but they’re not little guys, either. I’m proud of what they’ve been able to accomplish.”

And, what they’ve done has helped make the Marietta College football team a winner for the first time since 2006.

“We were 3-7 last year, and we got a little bit better, but it wasn’t where we wanted to be. So, we go into this offseason, and you work and you work and you work. And, finally, things started to come together for us. We’re 6-3 and hopefully 7-3 (after Saturday). It’s very fortunate for us, and for me personally, to be on this team that’s turned it around. But it’s been by no means just us. It’s been…the foundation was laid way way before we got here. And, we just happen to be here for the fruits of it all, turning it around.”

If the Pioneers defeat the Cardinals Saturday, they’ll finish on a high note with a five-game winning streak and a 7-3 mark for the first time since 1996.

Riggleman smiled and added, “With Darrien and Roger out there, nothing’s impossible. You can put them out there with just about anybody, and they can make some good things happen.

“Darrien does things that I’ve never seen anyone else do, and Roger runs through guys that he shouldn’t be able to run through. They’re two special guys.”

Thing is, the feelings are mutual.

“I was just trying to do what I can and what I do best,” said Walker after rushing for 189 yards on 29 carries and four touchdowns in a 44-21 Pioneer triumph over then-nationally-ranked Heidelberg University in the homecoming game Oct. 21. “But it’s not all me. It’s my offensive line, getting the holes for me and pushing down the piles and all that. I was just doing what I have to do to help the team.”

Waddle said that MC’s o-line has done “a tremendous job.”

“They do create holes and I don’t want to minimize what Roger or Darrien have done, because they’ve both been very good,” the coach added. “But they’re also a product of more than just themselves. We all are. But for those guys, it starts upfront on the offensive line. Without those guys (o-line), we wouldn’t have some of the offensive statistics that we have.”

This season, Marietta is second in the OAC to perennial powerhouse Mount Union in rushing yardage.

“They’ve gotten better as the season has progressed, and I think they get better as games go on,” said Waddle of the o-line. “I think Coach (Alan) Estep does a tremendous job of leading that group as well.”

So, just who are these o-line guys?

Well, for one thing, the line has undergone a couple of changes since the start of the season. In the beginning, there were two seniors upfront — Eric Canterbury at center and Jalowiec. Now, there’s only Jalowiec.

“Eric got hurt, and he’s not in there anymore,” Riggleman said. “He was out with a concussion a couple of weeks ago.

“Anthony’s the one left. He’s the only guy who’s been here for it all.”

Filling in for Canterbury has been Mulholland.

“I love Brendan,” Riggleman said. “He’s a tough, little kid. He really is. He’s the shortest of our offensive linemen, and we give him a hard time about that. He’s done a terrific job at center.

“He filled in when Canterbury got hurt. It was a new position for him, because he played tackle in high school. He’s done a great job. He knows the offense and what’s going on.”

Originally, Sturgill had been the back-up center on the depth chart, but he was moved to starting right guard, Mulholland’s old position.

“Michael’s done a great job this year, stepping in,” Riggleman said. “He’s battled through a lot of pain this year. He hurt his elbow (vs. Baldwin Wallace). And, he’s played every game. In most practices, he’s been fighting a lot of pain. But he’s done a good job, doing things well and doing things right.”

Then, there’s Henderson, the right tackle.

“Payton was the only guy out there with me last year in all 10 games,” Riggleman said. “He’s come a long ways. He’s had a good year this year at right tackle. He doesn’t talk much. He’s a quiet kid, so I end up doing most of the talking.”

“We’ve got a pretty solid front, five really good guys right there,” he said. “At least four, I won’t speak for myself.

“You couldn’t ask for a better group of guys to play with. They’re just tremendous football players and tremendous people.”