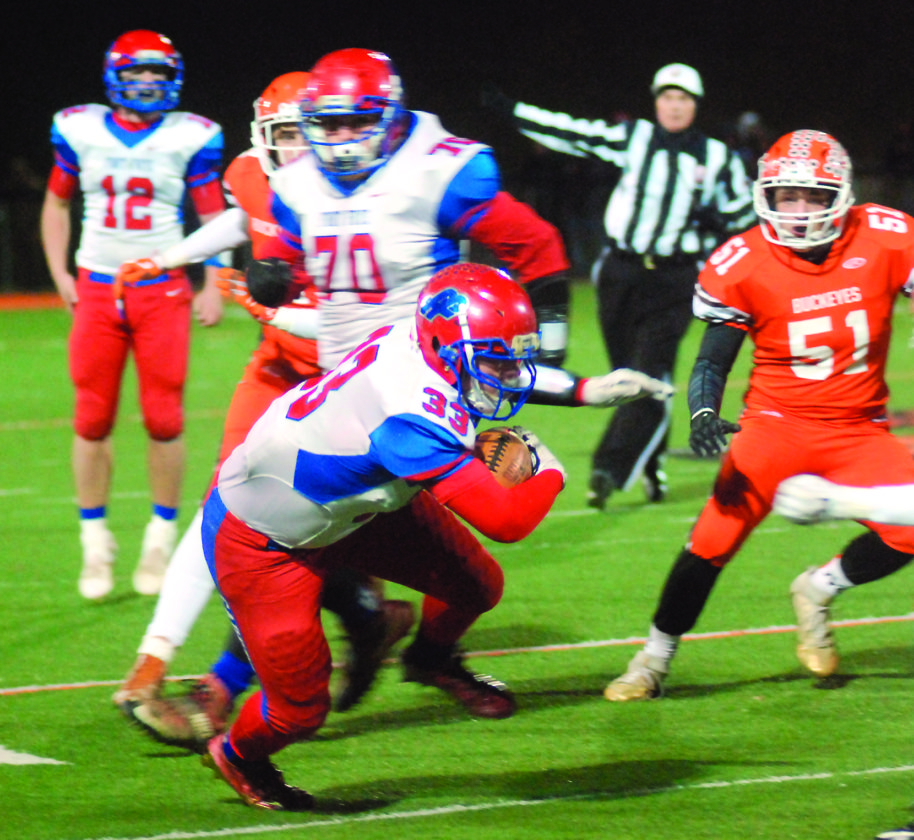 NEW LEXINGTON — Fort Frye came so very close to pulling off a miracle fourth quarter comeback only to come up short in overtime to the Nelsonville-York Buckeyes 26-20 Friday night in the Division VI, Region 23 regional semifinal at Rockwell Stadium in New Lexington.

The Cadets trailed 20-0 entering the final quarter of play but rallied for three unanswered touchdowns to force overtime before falling in a heart-breaker to the top-seeded Buckeyes.

The Buckeyes used the big play throughout the first three quarters of the game to pull out to the three-touchdown lead thanks to the strong right arm of senior quarterback Garrett Maiden. Maiden connected with Chris Cook on a 71-yard scoring play late in the first quarter to give York the early lead and then hooked up with Keegan Wilburn on a 55-yard touchdown pass late in the second to send the Buckeyes to the intermission with a 13-0 lead.

The Rusty Richards-coached Bucks increased their lead to three scores with four and a half minutes to play in the third quarter when Maiden once again found Wilburn for a 32-yard scoring strike to extend their lead to 20-0.

Fort Frye was able to move the ball for most of the game but could not dent the scoreboard until they put together a 51-yard, 11-play drive capped by an eight yard scoring plunge by Evan Schob just over a minute into the final quarter.

The Cadet defense, which had allowed more than one touchdown in a game only once all season long stopped the Buckeyes on three plays to turn the ball back over to the Fort with momentum suddenly switching into their favor.

Fort Frye sophomore quarterback Tate Engle connected with senior Tyler Bradford on a perfectly executed screen pass that resulted in a 35-yard gain to move the ball deep into NY territory where Bradford finished off the drive with a 2-yard touchdown run with 4: 46 to play in the game.

Once again the Cadet defense did their part as they forced Nelsonville York into a three and out on their next possession, allowing just 15 seconds to tick off the clock.

The Cadets took over at their own 10-yard line and methodically marched the ball down the field using a mixture of running plays and screen passes.

“We definitely saw some things at halftime that we could use against them,” said Fort Frye head coach Eric Huck. “It was really working well in the second half and I was pleased with the way we responded.”

A 31-yard screen pass from Engle to Brady Schilling moved the ball into Buckeye territory and passes to Schob and Tyler Fisher of 18 and 14 yards respectively put the ball on the one-yard line with less than a minute to play.

Schob’s carry moved the ball within a football of the goaline where Bradford bullied his way into the end zone to tie the game at 20-20 with just 25 seconds remaining on the clock.

An extra-point was all that stood between the Cadets and their second consecutive appearance in the regional final but unfortunately Zach Schilling’s kick fell well short of the goal post after what appeared to be a bad snap on a night where the temperature stayed below freezing the entire game.

Nelsonville-York won the coin toss in overtime and elected to let the Cadets go on offense first.

Unlike their final three possessions in the fourth quarter, the Cadets were unable to move the ball in the overtime turning the ball back over to the Buckeyes.

Senior running back Colt Yinger gained 15 yards on the first play and then pounded a dagger into the hearts of the Cadets when he plowed his way into the end zone for the five-yard game winning touchdown.

“Colt (Yinger) came up to me and said give me the ball and he should have gotten four yards on that first run and broke like three arm tackles to get the 15,” said Richards. “We knew they weren’t going to let down and he kept his word.”

Yinger led all rushers with 82 yards in the game on nine carries while Maiden completed 9-of-14 passes for 227 yards and the three touchdowns. Both Cook and Wilburn went over the 100-yard mark in receiving yards for the 12-0 Buckeyes who will advance to the regional final next Friday night against third-seeded Dawson-Bryant.

Engle connected on 12-of-20 pass attempts for 171 yards for the Cadets, whose season comes to a close with a 10-2 record.

“I’m really proud of the ways our guys fought back. Being down 20-0 it could have been very easy to pack it in,” said Huck, “They believe in themselves and each other and they fought back and it was a heckuva football game.”