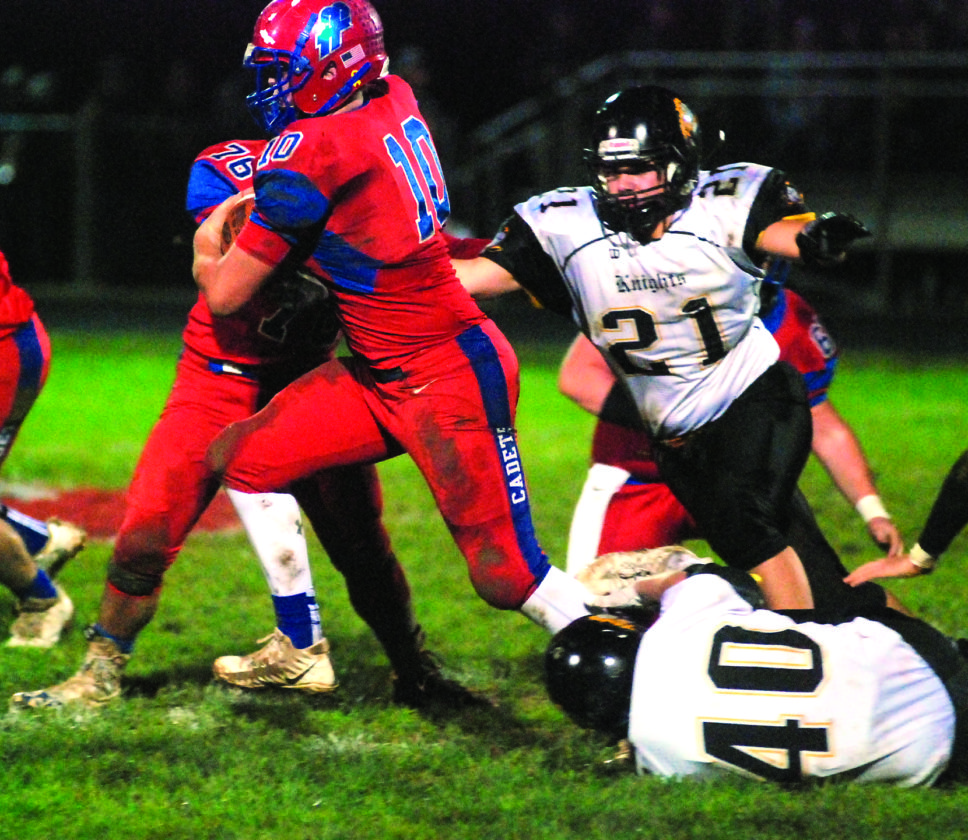 BEVERLY — The offense made the game-winning play, but the defense won the game for Fort Frye.

Tate Engle’s 26-yard touchdown pass to Tyler Fisher with seven seconds left lifted the fourth-seeded Cadets (10-1) to a 6-0 victory over fifth-seeded Northmor (8-3) Friday night in Beverly. The Cadets defense held standout Golden Knight quarterback Demetrius Johnson to less than 100 yards rushing and picked him off twice, including Brady Schilling’s interception at the goal line with 43 seconds remaining that set up Fort Frye’s touchdown.

“It was all about our defense, really,” said Fort Frye head coach Eric Huck. “Our defense was outstanding. (Johnson) averages 200-and-some yards a game.”

Fort Frye limited the Knights’ QB to 96 yards on 25 carries, but more importantly, didn’t give up any backbreaking plays.

“Our offense put us in bad situations a lot and our defense was able to step up and do what they do,” Huck said. 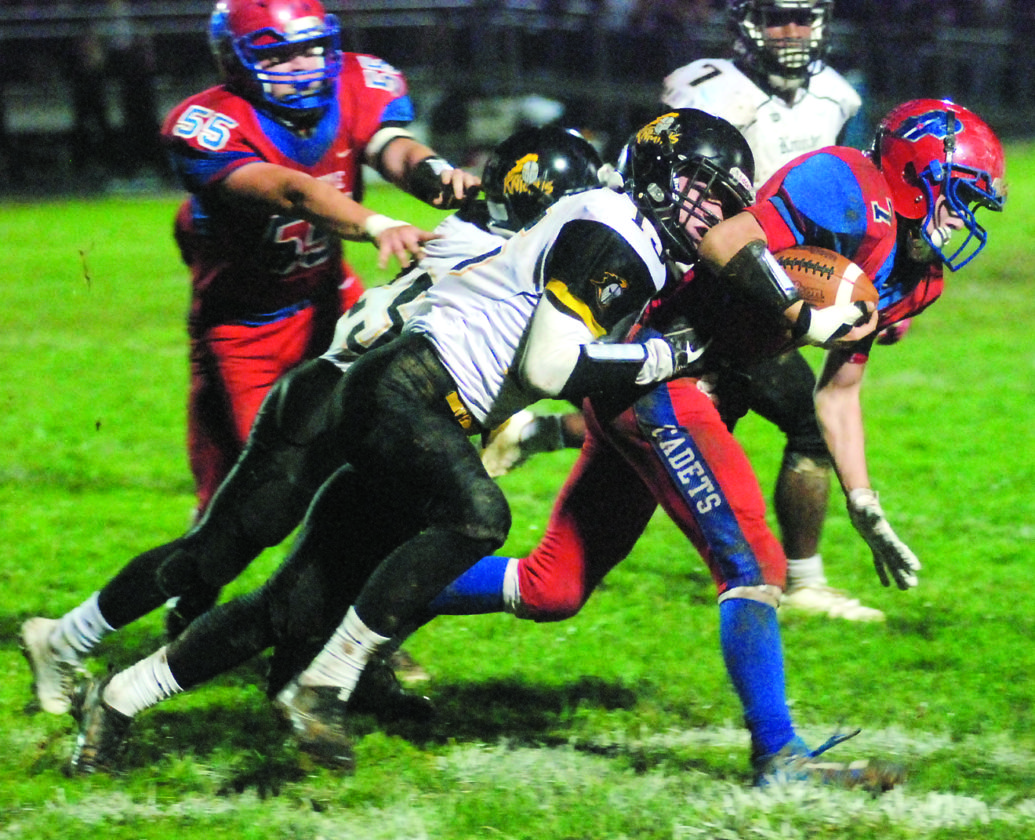 “Our defense had great confidence,” said Engle, who was 10 for 19 passing for 171 yards. “I think we stopped them in the red zone four times.”

The last stop was the biggest.

Johnson competed passes of 34 yards to Conor Becker and 19 yards to Ryan Moore to give the Knights the ball at the Fort Frye 10-yard line. After a Northmor timeout, Johnson threw a pass on a corner route that Schilling stepped in front of for the pick. He returned it 42 yards to give way to the offense.

“I was just thinking, ‘We’ll get a stop right here.’

“I saw the ball go up in the air. I had the deep-third and I was covering my area and made a play on the ball.”

Added Huck, “That was a big pick and man did he have a big night. He had a couple big catches.”

The very next play, Engle found Schilling up the left sideline for 33 yards to the Northmor 25. Two plays later, Engle and Fisher hooked up.

“Brady set up that whole drive,” Engle said. “We went back to our back chair that we ran earlier in the game. When coach called that I knew (Fisher) might be open. Jesse (McLeod) ran down the safety, bumped him, and there it was. Perfect playcall by coach and we just executed.”

Brenden Huck also intercepted Johnson, who had two picks himself on defense.

On back-to-back offensive possessions for Fort Frye in the first half, Engle was intercepted by Gavin Ramos and Becker, both times giving Northmor the ball in the red zone. The result was two turnovers on downs as the Cadets held tough.

“Our linebackers flowed really well and our defensive line filled their gaps and they played tremendous,” said Engle, who noted limiting Johnson as a main key to the victory.

“We knew how good he was. We were told he might be the best back we’d seen all year, and I can attest that he probably was. He’s never done. He can always make a play whenever he needs to. We worked hard all week.”

Despite the turnovers and failure to score points, Engle never lost confidence and redeemed himself on the final drive.

“He knows he’s a heck of a quarterback,” Huck said. “He knows his ability. I put him in a couple bad situations where he threw it up and if they intercept it, it’s like a punt. We were trying to find something that worked. They had a good defense.”

In total yards, Fort Frye finished with 271 to Northmor’s 214. Fisher caught three balls for 74 yards and the score while Schilling had four receptions for 73 yards. Evan Schob was the Cadets leading rusher with 46 yards on 14 carries as Fort Frye couldn’t get going on the ground.

The last time the Cadets played a 6-0 game, they were on the wrong side of the scoreboard against Northridge, their only loss of the season. Since, Fort Frye has won nine straight.

The Cadets won their third playoff game in the last two seasons. They’ll play top-seeded Nelsonville-York, which shut down Shadyside 34-0, next Friday.