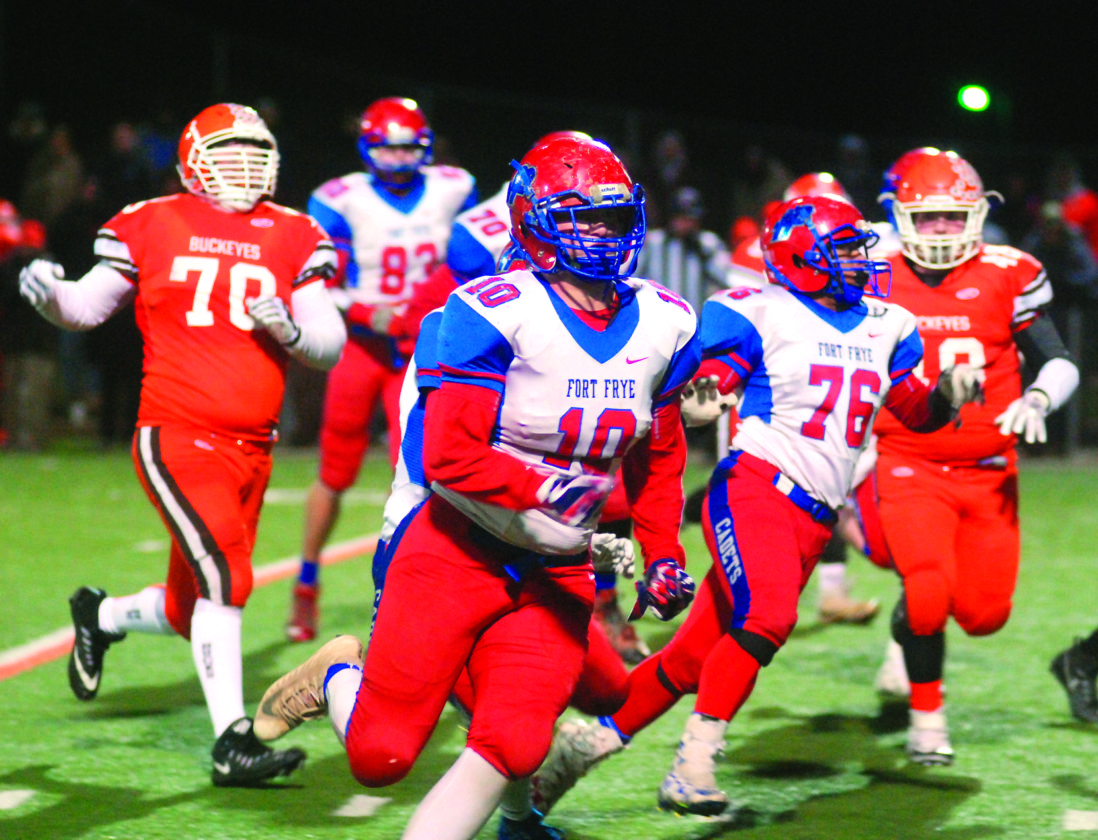 NEW LEXINGTON — Fort Frye High owned the fourth quarter, and was one extra-point kick conversion of erasing a 20-point deficit and winning the football game at Rockwell Stadium Friday night.

Instead, the fourth-seeded Cadets (10-2) missed the PAT, and the contest ended up going into overtime. In OT, top-seeded and undefeated Nelsonville-York (12-0) prevailed and eked out a 26-20 triumph in a Division VI, Region 23 semifinal.

The Buckeyes can count themselves very fortunate, while the Cadets were … well, they were unlucky. Yes, making that extra point boot would’ve been nice and would’ve won them the contest, but one play in a game doesn’t decide which team wins and which one loses.

Fort scored three touchdowns in the final period, and momentum was definitely on its side. So, what about all those plays in the first three quarters, which produced zero points?

A couple of plays come to mind. Early in the second quarter, Cadet senior Jesse McLeod was wide open running a route to the end zone. But junior QB Tate Engle was not able to get the ball to him.

Then, just before the half, FFHS was knocking on the door, and Engle threw a nice pass to Brady Schilling in the right corner of the end zone. Schilling, who was blanketed by a Buckeye defender, got a hand on the ball but couldn’t secure it. It would’ve been a spectacular reception if he’d caught it.

“They had a couple of good receivers,” Huck said. “That sophomore number three (Keegan Wilburn), he’s a heckuva athlete. And, for the most part, we had him covered. But the ball was put where it needed to be.”

After their second touchdown, the Buckeyes missed the extra point.

“We’ve got the best kicker ( Garrett Maiden) in southeast Ohio,” said N-Y boss Rusty Richards. “It was just one of those things, but I was thinking we were going to get beat by an extra point.”

Now, those were almost prophetic words.

In the third quarter, Nelsonville-York scored on another long pass play, which stretched its lead to 20-0.

Fort was in a big hole, but to its credit, it didn’t panic.

In the final period, everything came together for Fort Frye. Moving the ball and chains, junior Evan Schob got the Cadets on the board early with an 8-yard TD run, and senior Tyler Bradford would later score on two short runs to the end zone.

What got the Cadets close to paydirt, though, were short screens and swing passes by Engle.

“We definitely saw some things at halftime that we could use against them (Buckeyes),” Huck said. “It was really working well in the second half. Just not quite enough.

“They (Buckeyes) were overly aggressive, and the screens were big for us,” Huck added.

After Bradford’s second TD run tied the score at 20-all, senior kicker Zach Schilling lined up to boot the potential game-winning PAT. On Fort’s first two touchdowns, he’d split the uprights twice right down the middle. But on the third time, it looked like the snap from center was high, and both Engle — the holder — and Schilling had to hurry.

The kick was no good.

The Buckeyes won the coin toss before OT started, and elected to play defense. Good choice, as it turned out, because they were able to stop the Cadets.

“In overtime, we were so far backed up, I don’t know if the screen would’ve helped us there,” Huck said.

Not long afterwards, on offense, N-Y went on to win the game on senior Colt Yinger’s 5-yard run to paydirt.

Oh, but did the Cadets come ever so close to winning this one.

“I’m really proud of the way our guys fought back,” Huck said. “Being down 20-0, they could’ve packed it in, but they believed in themselves and each other, and they fought back, and it was a heckuva football game.”

Ron Johnston is a Marietta Times sports writer and can be reached at rjohnston@mariettatimes.com