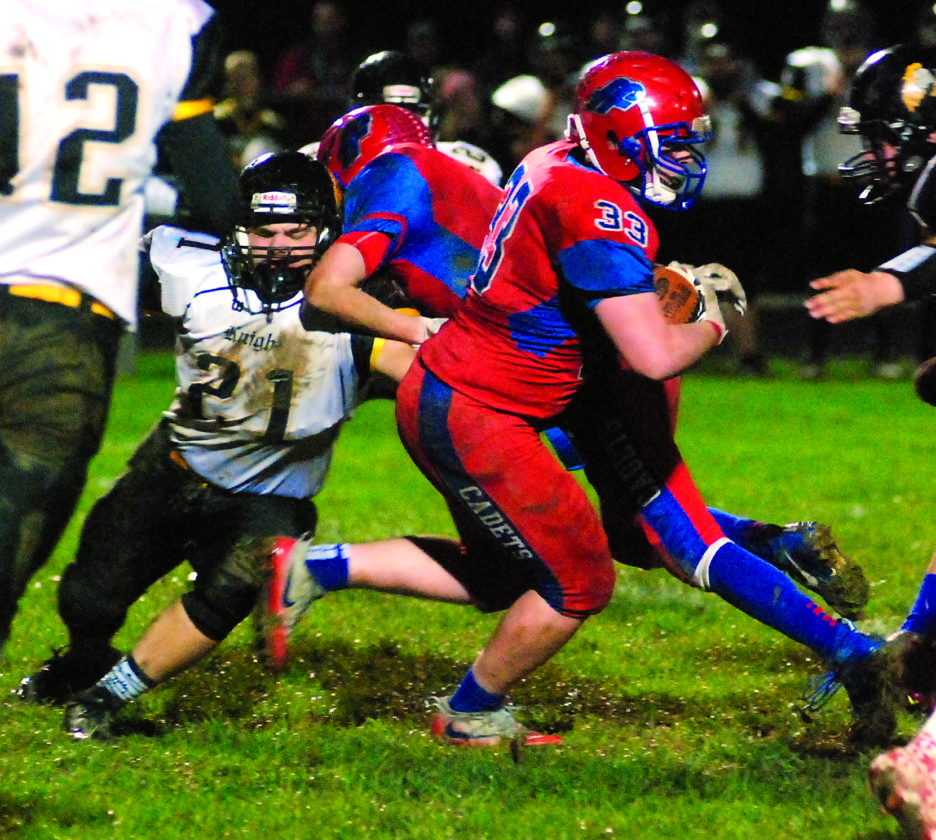 BEVERLY — Fort Frye head football coach Eric Huck likely will need to get a little more out of his offense in Friday night’s Division VI, Region 23 semifinal tilt against top-seeded Nelsonville-York in New Lexington than he got last week in their thrilling 6-0 win at home over Northmor, but a repeat performance by the Cadet defense would suit the veteran boss just fine.

The Fort Frye defense was brilliant once again last week as it limited the powerful Golden Knight offense, which came into the game averaging 36 points per game, to zero points and just 214 total yards.

“I thought our defense played as well as they have all season,” said Huck, in his 10th year as Cadet head coach. “They came up real big all night long especially in the red zone.”

The shutout was the fourth of the season for the Fort defense and marked the eighth time in 11 games that they have given up one touchdown or less.

The Cadets (10-1) are allowing their opponents to score just a little more than seven points per game on the season while allowing a puny 35 total points over their last eight games.

On defense, Fort Frye will likely start Logan Isner and Jesse McCleod on the ends with Isiah Jones and Tyson Miller at the tackle spots.

Bradford is no doubt the leader on the field for the Cadet defense which is coordinated by veteran Chad Ross.

“Tyler (Bradford) is definitely our leader and he reads about as well as anyone I have ever coached,” said Huck of the 6-1, 208-pound Bradford.

The Cadets offense came into last week’s game on quite a roll as they had averaged 36 points per game in their eight games since being shutout 6-0 by Northridge in the season’s second week for their only loss of the season, but struggled for most of the game against the Knights before scoring the game winner on a 26-yard touchdown pass from Engle to Fisher with just seven seconds to go in the game.

Engle had a rare off-game against Northmor as the junior signal caller ,who has lost just three times in 35 career starts as Cadet quarterback, tossed five interceptions before recovering to fire the game winner to Fisher.

“Tate is one of those guys that is determined to get better and better and will work to fix whatever needs fixed when he does have a bad game,” said Huck. “The way he responded and stayed focused on that last drive last week shows what kind of a competitor he is.”

Those five picks matched the number of interceptions that Engle had tossed in the entire regular season.

Joining Engle in the Cadet backfield will be the trio of Bradford, Fisher and Schob, who have combined for over 2,300 rushing yards and 28 touchdowns in 2017.

McLeod, Braden Henniger and Brady Schilling are primary receiving targets for Engle while the Cadet line will likely feature Zach Schilling at center flanked by Miller and Jones at the guard positions and Isner and Cameron Camp at the tackles.

Huck has had time to study the Buckeyes on film this week and knows his team is in for a big test Friday night as they attempt to advance to the regional championship game for the second consecutive season.

“They are a very good football team with lots of threats. Both running backs have good size and can run and their quarterback is very good as well,” said Huck. “Defensively they seem to be very good against the run so we will have to play our best.”

The 11-0 Buckeyes come into the game averaging 41 points per game while limiting their opponents to just 12 and own three wins against playoff teams compared to four for Fort Frye.

Nelsonville-York is led by senior quarterback Garrett Maiden who has completed 56 percent of passes for 1,616 yards and 18 touchdowns.

Much like the Cadets, the Buckeyes have plenty of options in the backfield including sophomore Keegan Wilburn and senior Colt Yinger.

Wilburn leads N-Y in rushing with 1,141 yards and 12 touchdowns on 137 carries while Yinger has gained 864 markers and 11 touchdowns on 97 carries.

Both Yinger and Wilburn have eclipsed the 100-yard mark five times on the season while Maiden has chipped in with 625 yards rushing and 12 scores of his own.

Wilburn also leads the Buckeyes in receiving with 480 yards and seven touchdowns on 25 catches while senior receiver Chris Cook has caught 19 balls for 429 yards.

Defensively, the Rusty Richards-coached Buckeyes are led by senior back Ronnie Wend with 179 tackles while defensive end Tyler Speelman has registered a team-leading nine sacks.

Nelsonville-York advanced to the semifinal by blanking Shadyside 34-0 last week at home and are champions of the Tri-Valley Conference Ohio Division for the second consecutive season.

“Our defense has to play big again,” said Huck. “Offensively we have to run the ball better than we did last week and control the line of scrimmage.”