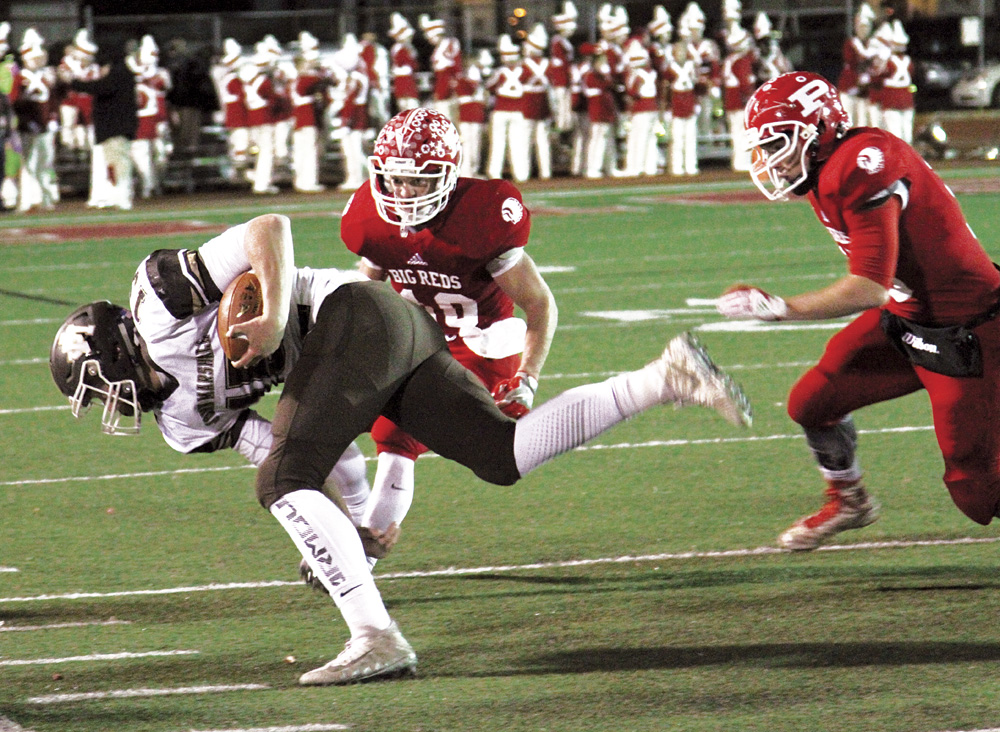 PARKERSBURG — Parkersburg High let loose with its passing game in the second half, but could never quite overtake visiting John Marshall in falling 42-35 in a first-round Class AAA football playoff game Friday night at Stadium Field to end its season.

The No. 7-ranked Big Reds finished at 7-4, while the No. 10 Monarchs improved to 8-3 and will play in the second round next weekend.

After a first half that concluded in only an hour with John Marshall up 14-7, both teams turned it up in the second half with PHS quarterback Kam Mace throwing four touchdown passes. But it seemed like whatever the Big Reds did, the were always still behind.

PHS got off to a good start, rolling downfield in just seven plays to score on a Seth Dailey one-yard TD run for a 7-0 lead at 10:25 of the first quarter.

No one put up points after that until the second stanza though, as John Marshall grinded out a 10-minute, 99-yard, 25-play touchdown drive to paydirt at the 5:42 mark on a three-yard burst by Nick Coulter for a 7-7 tie. 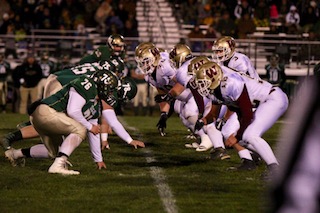 Photo by Neal Smith Players for East Hardy, left, and Williamstown, right, line up for a play during Friday's Class A playoff football game in Baker, W.Va.

In all, Coulter and Charles McCool combined for 408 rushing yards for the Monarchs, with McCool having 249 on 32 carries.

After recovering a PHS fumble, John Marshall tallied on a 15-yard scoring scamper by Coulter again at 4:10 to make it 15-7 at the half.

But the PHS aerial attack was just getting into gear, as Mace found Jake Johnson in the flat and Johnson took off, eluding defenders and then breaking free to race into the end zone for a 41-yard score to make it 21-14 at 7:30 of the third.

The next tally was by PHS as Johnson gathered in a deflected pass downfield and took off to the races, sprinting 68 yards for a TD at 1:40 of the third to pull within seven points again at 28-21.

Then came the fourth with two more TDs as each team took turns. First, Coulter intercepted and on offense, McCool took the pigskin 49 yards to the house at 11:35.

Dailey followed, hauling in a 29-yard TD toss from Mace at 9:02 for a PHS score before Couler tallied again, fighting his way 10 yards to paydirt at 2:20.

PHS, though, got a TD with just 1:42 to play on a 14-yard scoring strike from Mace to Brenton Strange before the Monarchs recovered a Big Red onside-kick and ran out the clock on PHS.

The 16th-seeded Yellowjackets led 10-7 late in Friday’s W.Va. Class A playoff football game, but a touchdown pass from Clay Skovron to Brett Tharp with 5:53 remaining gave the Cougars a 14-10 lead. East Hardy made that lead stand up to survive the scare.

A game where both teams were plagued by turnovers and penalties, Williamstown (5-5) got on the board first on Boston Caruthers’ 30-yard field goal with 1:01 left in the first quarter.

East Hardy (11-0) answered quickly with 17 seconds left in the period. From a yard out, Skovron ran the ball into the end zone for the game’s first touchdown. Nick Miller added the extra point to make it 7-3.

Williamstown finally found the end zone with 38 seconds left in the third quarter. With the ball at East Hardy’s 5-yard line, Donathan Taylor took the carry for a 5-yard touchdown rush. Caruthers booted the point-after try to make it 10-7 in the Yellowjackets’ favor.

Williamstown appeared to be on its way to pulling off a major upset, but Skovron and Tharp hooked up for the decisive 33-yard touchdown strike and East Hardy’s defense kept Williamstown from finding last-minute magic.