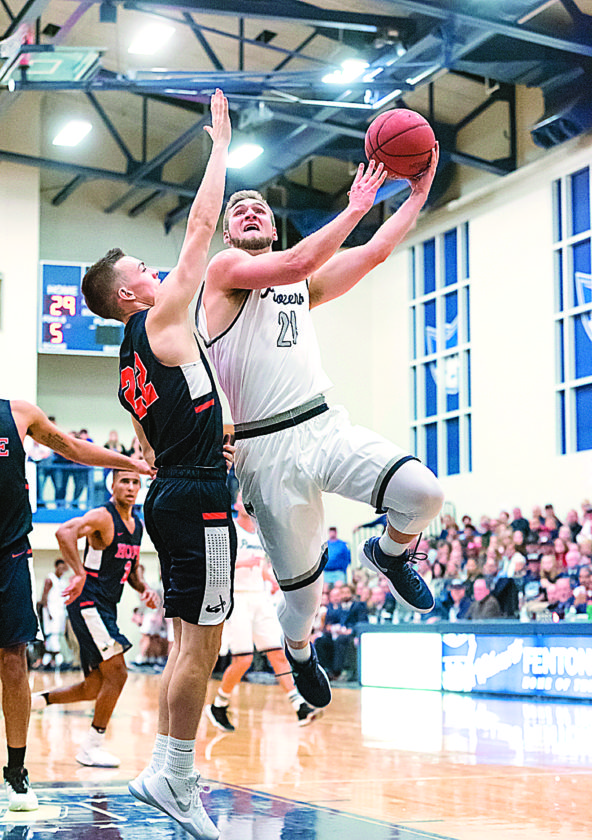 Marietta College hit the century mark on the scoreboard for the third straight year in its season- and home-opener.

The Pioneer men got off to a slow start but once they got a double-digit lead, they never relinquished it as they defeated Hope College, 102-71, in the nightcap of the Great Lakes Invitational at Ban Johnson Arena Friday evening.

“It was a great start to the year,” said 11th-year MC head coach Jon VanderWal, whose Pioneers (1-0) were ranked No. 13 in the nation in the D3hoops.com Preseason Top 25 poll.

Indeed it was as Marietta shot a blistering 59.7 percent (37 of 62) from the floor, and featured five double-digit scorers.

“You know, we’ve actually been struggling shooting the ball in practice,” VanderWal said.

“It was nice to see our guys make some shots tonight,” VanderWal said. “The kids made all the right plays.”

Dennis Towns and Teddy Ray chipped in with 11 and 10 points, respectively, for the Greg Mitchell-coached Flying Dutch. HC shot just 45.5 percent (25-55) from the field.

Early in the first half, there were six lead changes and two ties. Hope actually led for nearly nine of the opening 20 minutes of play.

But then, Marietta had two 11-0 runs, which the Flying Dutch never recovered from.

During the first 11-0 run, Wallace and Dixon scored six and five points, respectively, to make it 34-27.

After a Hope timeout, it scored five straight points to cut it to two.

The Pioneers, however, countered with another 11-0 run, which gave them a 45-32 advantage.

“Once we settled into the game and got comfortable, I thought we started making some plays,” VanderWal said.

Early in the second half, the Flying Dutch were able to reduce the deficit to 12 points a couple of times, but that’s as close as they would get.

The Pioneers just had too many weapons on the floor for the Flying Dutch to contain. All in all, 16 MC cagers saw playing time. With under two minutes remaining in the contest, Kyle Woodruff scored seven straight points to put the navy and blue over 100.

“We’ve got all kinds of lineups we can play, and we’ve got versatility,” VanderWal said.

The Pioneers are scheduled to host the University of St. Thomas at 7 p.m. tonight. Before the MC-Hope game, the Tommies (1-0) defeated Dickinson College, 73-68.