St. Marys begins quest to repeat as Class A champs 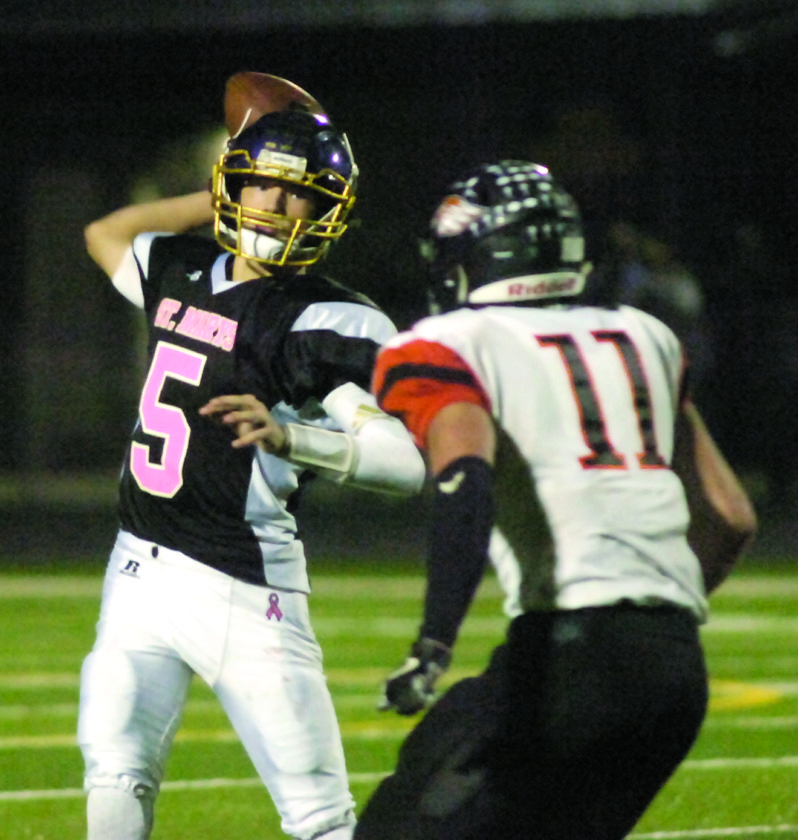 ST. MARYS, W.Va. — Opportunities to make history don’t present themselves every day in the realm of sports.

St. Marys High School’s football team received one of those rare chances last season when it brought home the first gridiron state championship in the 106-year history of the school after a 23-8 win over East Hardy at Wheeling Island Stadium.

Celebrations took place all over Pleasants County in the following week as memories of near misses faded away to the past.

Even bigger parties could be thrown a month from now as the fifth-seeded Blue Devils (8-1) stand four postseason games away from repeating as the last team standing in Class A.

“I think that happened during the regular season,” said Blue Devil head man Jodi Mote talking about his team getting everyone’s best shot. “This is a whole new season. We have an opportunity to repeat and you can’t say that every year. Last year was awesome, but this is something new. Your kids are different as far being able to do different things from a coaching side of it, but at the same time you still have the same goal. Our goal is to win a state championship last year and thankfully we were able to win but that is our goal every year. I don’t think that (having a chip on your shoulder) has anything to do with it. If you aren’t ready for the playoffs and a ball game you don’t belong in the postseason.”

Mote’s team begins the quest as the healthiest they have been since a 34-17 win over rival Williamstown on Sept. 29.

“We aren’t 100 percent but definitely in better shape going into this game then basically from Williamstown on,” said the 16-year leader of the Blue Devils. “Jaiden Smith got hurt on play 11 and it snowballed from there with kids getting banged up. Different stuff has been going on all year but everyone is starting to come back a bit which is encouraging from a St. Marys standpoint. Everyone has to battle injury problem. I would rather be going into this game the way we feel now then before South Harrison, Magnolia or Ravenswood.”

Hoping to spoil the party is twelfth-seeded Doddridge County, back in the playoffs for the first time since 2014.

There may be no team hotter than Bobby Burnside’s Bulldogs either. The green and gold come in riding an eight-game winning streak into the first-round matchup at 1:30 p.m. Saturday inside St. Marys’ Bill Hanlin Stadium.

Solving a strong defense and a balanced offense are key for the Blue Devils to move one step closer to the final game of the year at Wheeling Island Stadium.

Confidence won’t be a problem as the Bulldogs gave second-seed South Harrison the closest game the Hawks played all year. The final score was 28-14, but could have read 28-21 if not for a penalty nullifying a 51-yard touchdown run before halftime.

“I think they are going to try to stop Jaiden (Smith) and Dylan (Gray),” said Mote of DC defensive coordinator Dave Burnside’s unit. “That is what I would try to do. Stop the run and force us to throw the football.

Offensively, the Bulldogs like to line up in an I-formation and cram the ball down an opponent’s throat behind a massive offensive line averaging 250 pounds across the trench. Hunter America and Curtis James are the main weapons who handle the dirty work. Fullback Logan Gogan provides another hard-nosed blocker out of the backfield, but could carry the ball at times.

“It is definitely a challenge for your defense any time you face someone who isn’t run or pass dominated,” added Mote.