St. Marys looks to repeat as W.Va. Class A champs 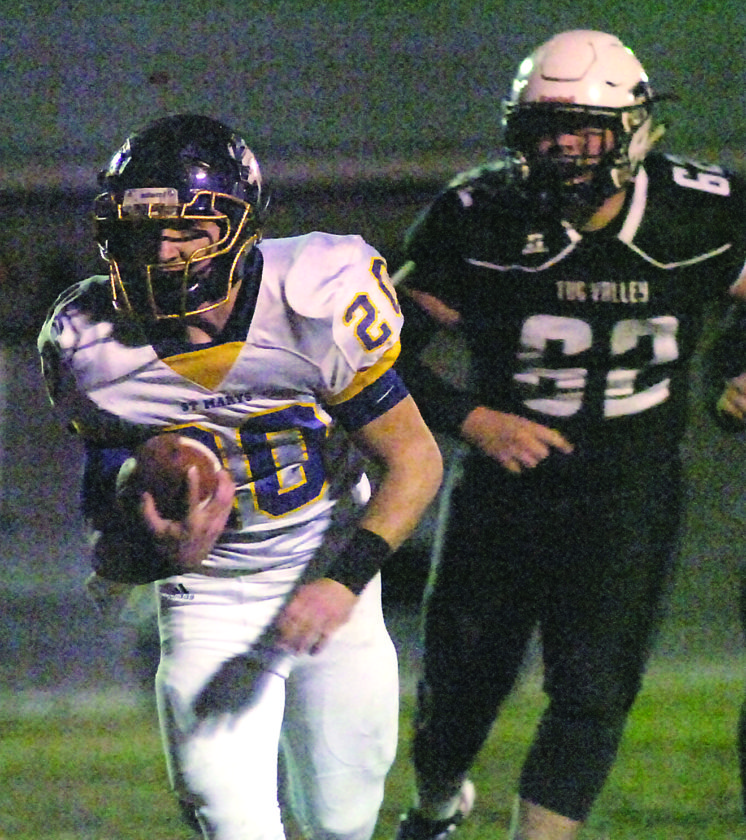 ST. MARYS, W.Va. — For the third time in four years, the city of St. Marys, W.Va., will empty and head to Wheeling Island Stadium to cheer on their Blue Devils in the state title game against Wheeling Central at 7 p.m. Saturday.

In the blur of emotions of the last three weeks, overlooking how Jodi Mote’s squad went about arriving in this position in the first place is understandable.

An 8-1 mark through the season’s first nine games netted the Blue Devils the fifth-seed in the playoffs.

The hard work began back on Aug. 25 with road trips to Ellenboro and Elizabeth.

Mote’s team did what they were expected to do in the first two games of the season against Ritchie and Wirt County. Walking away with a 2-0 record after outscoring the Rebels and Tigers 93-6.

Another team of Tigers faced the Blue Devils in the fifth week of the season in an unusual circumstance. Parkersburg Catholic took a no-contest to St. Marys the week before setting up a two-week window where the Blue Devils didn’t play football.

Mote called the game against Marietta “the first big test of the season and a chance to see where we truly stand.” Matters weren’t helped by the fact Jason Schob’s squad wanted a little payback after a 51-36 loss inside Don Drumm Stadium in 2016.

However, where Mote’s team truly stood was pretty high. Schob’s defense was overwhelmed in a 63-19 setback as the home team improved to 3-0 on the young season.

An all-important matchup with rival Williamstown marked Week 6 for the Pleasants County School. Though the team captured a 34-17 victory, it was far from a perfect performance.

Three turnovers and ten penalties opened the door for the Yellowjackets to snap the Blue Devils’ five-game winning streak in the series, but the St. Marys’ rushing attack proved too much for Williamstown to overcome.

Jaiden Smith and Dylan Gray scored three times on running plays in a deciding second quarter. Despite a great performance from Smith, it was not all good news for the St. Marys’ senior. He injured his ankle on the eleventh play of the game, which would cause him to miss time later in the season.

“It’s just that they are really good,” said Williamstown head coach Terry Smith after his team gave a gutsy effort in a loss. “To beat these guys you have to play a perfect football game, and even if you do that you may not win.”

Calhoun County and Magnolia proved little roadblocks as they only combined for 14 points to St. Marys’ 96 the next two games.

Adversity hit the team pretty hard Oct. 20 when South Harrison rolled into town with a 7-0 record. Brad Jett’s team had revenge on the mind after an embarrassing 47-6 thrashing from the Blue Devils one season ago.

The Hawks rolled out to a 28-0 lead then pulled away late for a 43-15 victory, which snapped the home team’s 20-game winning streak. Several injuries on the defensive side allowed the Hawks’ Freddy Canary to rack up 318 yards on 27 carries and four scores. Several purple and gold players spent time on the turf being attended to by the training staff including defensive lineman Tucker Dalrymple, Antone Herring, and Dylan Gray.

“We got physically dominated upfront,” recalls Mote. “I think that game may have served as a wake up call to the boys for the rest of the season.”

Ravenswood brought a competitive bunch against the Blue Devils the following week but couldn’t score enough in a 20-10 home loss.

Senior Night saw a high-powered Tyler Consolidated squad head back to Kidwell empty-handed after a 55-14 setback.

“Every week you have to be ready and that is the week we finally started getting healthy and that was just critical,” said Mote of the game against the Silver Knights. “It just kind of carried on when we opened the playoffs.”

Indeed “it” has as the Blue Devils outscored No. 12 Doddridge County and No. 5 Tug Valley 91-14 in the first two rounds, before handing top-ranked East Hardy a 27-21 setback last weekend to advance to the final.

“We are pretty pumped,” said St. Marys’ quaterback Eric Illar. “Two years in a row with a chance to make history. This week was high intensity getting ready for the game Saturday.”