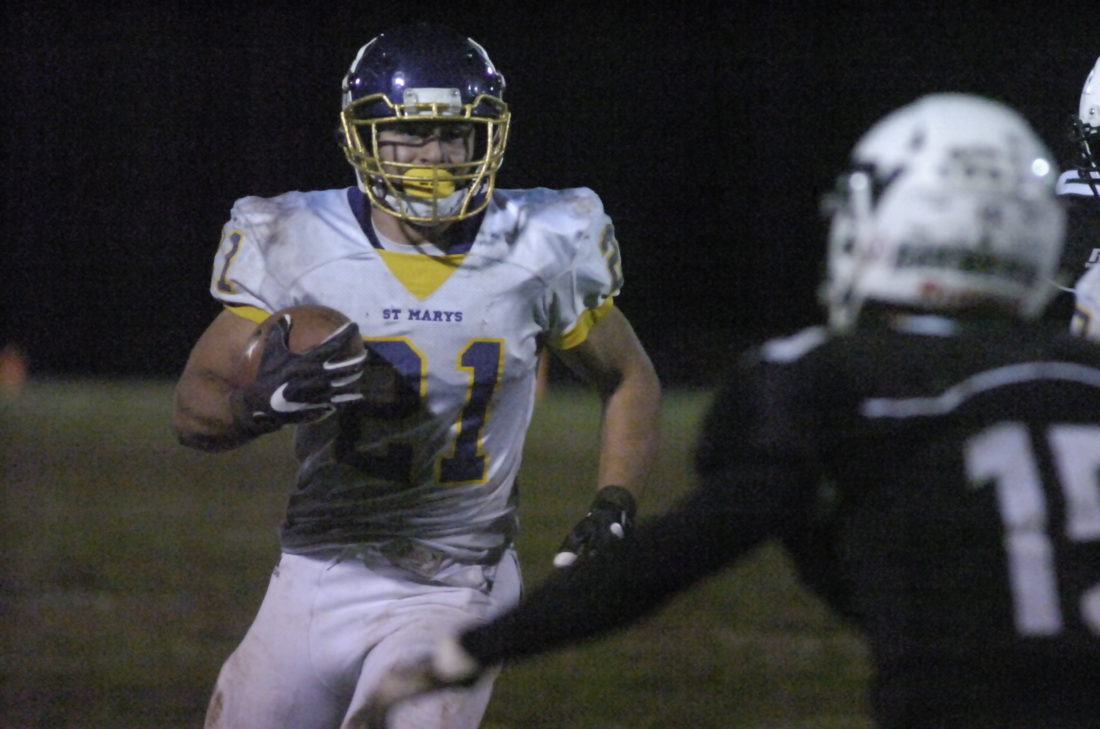 JOE ALBRIGHT The Marietta Times St. Marys' running back Jaiden Smith (21) sizes up a Tug Valley defender before making a move during the Blue Devils' 47-0 win over the Panthers in a W.Va. high school football Class A playoff matchup Friday night in Naugatuck, W.Va.

NAUGATUCK, W.Va. — This time of year is when you want to be playing your best football, which is something St. Marys did Friday night.

The fifth-seeded Blue Devils also showed what they can do when they are healthy after a dominating 47-0 win over fourth-seeded Tug Valley in a West Virginia Class A high school football playoff quarterfinal matchup.

“This time of year especially you have to be healthy and the ball has to bounce your way,” said St. Marys’ head coach Jodi Mote. “Stuff just has to happen. And thankfully right now that has happened. I feel like our team executed in all three phases. Our coaches did a great job putting these guys in a position to be successful, our penalties were limited and we had zero turnovers except for the one at the end. This time of year when you have good on good, that is what it boils down too. We are very thankful for what this team is by being ready to play.”

An opportunistic defense, powerful running game and some big plays powered Mote’s team to a meeting with either top-ranked East Hardy or ninth-ranked Sherman next weekend.

“This is definitely a huge confidence booster for sure,” said St. Marys running back Jaiden Smith. “It just lets us know where we are at now. Obviously, there are things we still have to improve on, but overall it was a pretty solid game.”

After forcing multiple turnovers in a 44-14 win over 12th-seeded Doddridge County in a first-round encounter last week, the Blue Devils again created takeaways (three fumbles and one interception). Zac Long scooped up a fumble on the first play of the second half and went in 33 yards for the score, while the offense capitalized on another fumble and the interception with 14 points.

St. Marys’ ground game turned in a dominating performance by piling up 419 yards on 37 carries. Two rushers went over the century mark on the evening, with Smith amassing 206 stripes on 14 totes and Matt Eichhorn picking up 126 yards on seven attempts.

Tug Valley head coach Tony Clusky’s worst nightmare came true as his defense failed to shut down the big play all night. St. Marys compiled six plays of 30 yards or more with Smith’s 86-yard touchdown run with 2:56 left in the second quarter being the biggest.

Another big gainer gave the visiting team the lead for good just 10:42 into the contest. Eichhorn took a handoff on a little trick play and dashed 55 yards to the end zone for a 7-0 St. Marys’ lead after Robbie Gonzalez nailed the extra point.

It was the senior’s second scoring run from his own 45-yard line of the playoffs as he took the first play from scrimmage to the house against Doddridge last week.

A three and out on Tug Valley’s first possession sent the football back to St. Marys after a punt. Six plays later, Smith found the end zone from 3 yards out for a two-score advantage.

The home team tried to respond and get on the board multiple times to make a comeback, but were stifled every time by a defensive unit yielding just 184 yards total on the evening.

Tug also received a big blow early in the first quarter when first-string running back Jonathan Blankenship injured his arm on a defensive play and exited the game. He walked the sidelines with his arm in a sling during the second half.

“He has been our motor all year,” said Clusky. “And we really missed him.”

Without its top back, the home team struggled to get anything going with its main offensive plan of attack. Chris Ellis and Noah Lucas combined for 90 yards on 22 carries, while as a team, the Panthers racked up 107 yards on 34 rushes.

“Hats off to St. Marys … they have an excellent football team,” continued the Panthers’ head man. “We did things tonight that you can’t do against a good football team. And the result on the scoreboard is what you are going to get.”

Dylan Gray’s 59-yard scoring reception from Eric Illar marked the final touchdown of the game at 4:27 in the third. The only points of the fourth quarter came after Jeremy Smith sacked Nathan Muscat in the end zone for a safety.