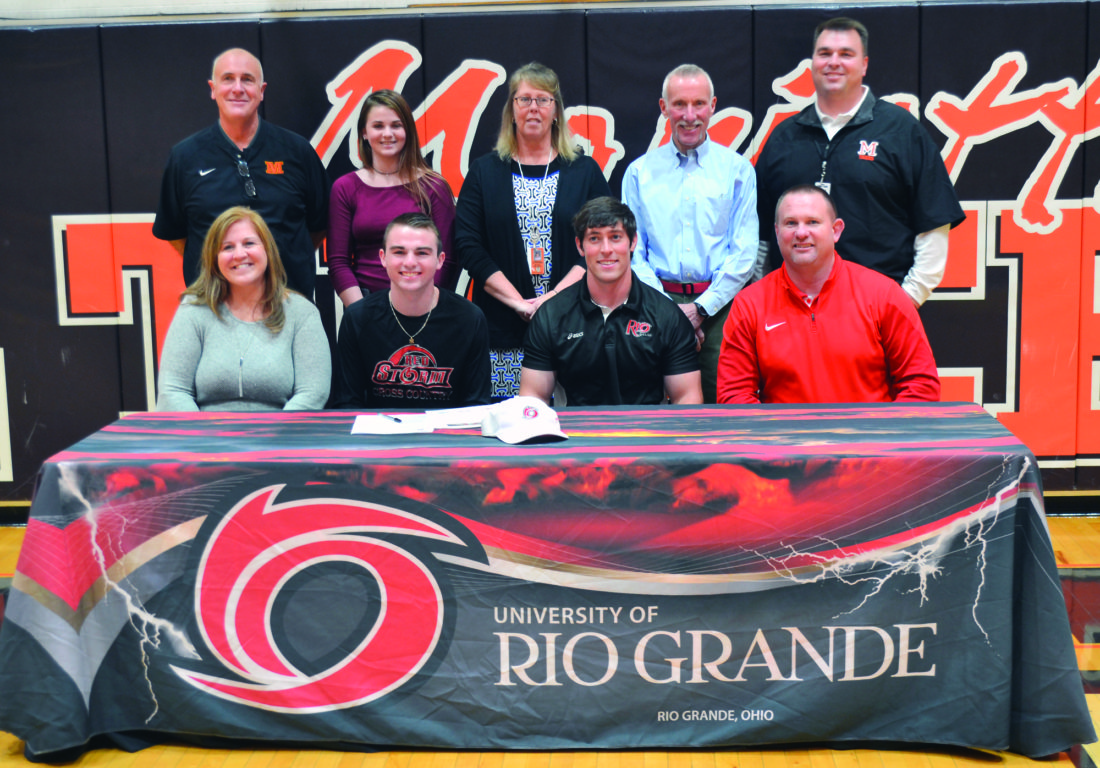 After an internship at Marietta Memorial Hospital last summer, Collin Doughty knew what he wanted to study in college.

On Thursday afternoon at Marietta High’s Sutton Gymnasium, the MHS senior runner signed a National Letter of Intent to continue his education and run at the University of Rio Grande after graduation in the spring.

“Rio Grande has the diagnostic sonography program that I wanted to go into,” said the 17-year-old Doughty, who owns a 3.2 GPA at Marietta, “and that was definitely one of the things that attracted me to them. It’s a growing field.”

Doughty said that he “looked at the University of Charleston and other schools that had the program,” but…

“When I went for my visit and stayed the night there with the team, I just loved the athletes there,” Doughty said.

“I loved Rio. I mean, I loved the campus, and I can just see myself there. I’m looking forward to being a part of the Rio RedStorm. I can’t wait to get to run with them.”

Doughty will be running both cross country and track and field at Rio Grande, which is an NAIA (National Association of Intercollegiate Athletics) school. Bob Willey is both the RedStorm’s XC and track coach.

“This is a great moment for Collin,” said Marietta cross country coach Dale Leeper. “He’s one of those young people who does what ever you ask.

“Rio will provide a nice educational opportunity for him. And he’ll make a great contribution over there. His glory days are far from over.”

Doughty finished his final season of MHS cross country running at the Ohio Division I regional meet at Pickerington North in late October. At Pickerington, he was 38th in a clocking of 16 minutes, 51.35 seconds.

“Division I was definitely a lot tougher, but it was very beneficial for me to run against some of the top athletes in Ohio and be ready to take it to the collegiate level,” Doughty said. “I look forward to those challenges.”

Added Doughty, “What I based my (senior) season off of was that I was going to do better on my time on every course. And, at regional (D1), I ran a significantly better time than I did last year (D2). That was the goal.”

This winter, Doughty will be training in preparation for his last hurrah as a Tiger thinclad. He is planning on competing in the 800, 1600, 4×4 and 4×8 events in the spring.

Leeper said that Doughty is going “to have a great track season coming up.”

Leeper said that Marietta High is definitely going to “miss Collin” after he graduates in the spring of 2018.

“He’s a special guy, and this (signing) is a special moment,” the coach said. “He is going to enjoy the intercollegiate athletic experience.”

COLUMBUS ŌĆö During its May meeting Wednesday afternoon, the Ohio High School Athletic Association Board of ...

PARKERSBURG ŌĆö When the calendar turns to June in the Mountain State that means itŌĆÖs time for junior ...