Waterford senior more than holds his own on the line 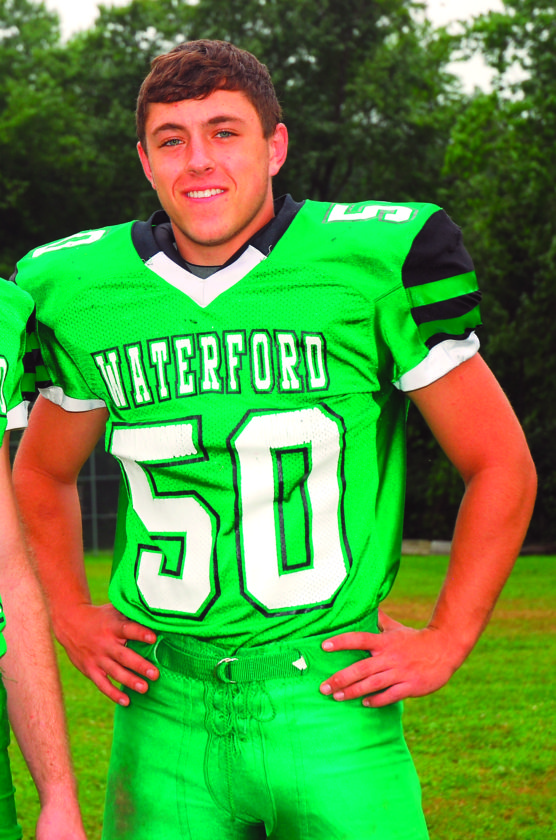 JORDAN HOLLAND The Marietta Times Waterford’s Teddy Smith has been a force on the Wildcats’ defensive line each of the last three seasons.

Question: Is Teddy a nickname?

Answer: (Laughs) My first name’s actually Theodore, but everybody calls me Teddy.

Q: I have to believe football’s your favorite game. When did you start playing?

A: It is, and I’ve been playing since the fourth grade. I was a linebacker at first, and then in the sixth grade, I played on the defensive line. In high, I’ve been a noseguard, center, tight end, guard, and this year fullback — anywhere that I can help the team.

Q: This year, you started out as a center on offense, but then you were moved to the backfield. Why’s that?

A: The coaches wanted me to be a blocking back for Braden (Bellville). So, they put Colin Jackson at center.

Q: I think you could play just about anywhere on the field. How’d you like carrying the football in the backfield.?

A: I’d rather block for Braden. I didn’t really care if I got the ball or not.

Q: At the noseguard position, you more than held you own against some pretty big guys. How’d you manage that?

A: (Laughs) I used my speed. Those big guys really didn’t phase me.

Q: And, you were a durable performer, too, during your football career at Waterford, right?

A: Oh, I’d get some cramps now and then. But I never had to come off the field with an injury.

Q: That’s because you were well conditioned, and no doubt spent a lot of time in the weight room?

A: They just wore us down, and we turned the ball over too much. We knew they were bigger and a pretty good team.

Q: During your football career at Waterford, what’s been your most memorable highlight?

A: When the school won its very first playoff game against Zanesville Rosecrans last year.

Q: How intense is the Waterford-Fort Frye rivalry?

A: It’s pretty intense when we’re competing against each other. But after the game, we talk to each other.

Q: Do you think you’d like to play college football?

A: I haven’t decided yet where I’m going to go. But yes, I’d like to play college ball. I’ve been looking at Capital (University) and Ohio University. Maybe I can walk on there (OU).

Q: What’s the Waterford basketball team going to be like this winter?

A: I think we’re going to be pretty good. We’ve got Travis (Pottmeyer), Bryce (Hilverding) — and Wyatt Lang’s back (after missing all last season with a knee injury).

Q: What events do you do in track?

A: I run sprints, and do the pole vault.

Q: Do you have a favorite sprint, and how fast are you?

Q: What’s been your best height in the pole vault?

Q: What do you do off the playing field? Any hobbies?

A: I just hang out with my friends, and play sports.

Q: Do you have a favorite NFL team?

A: (Laughs) The Pittsburgh Steelers. My mom grew up around Pittsburgh and is a Steelers’ fan.