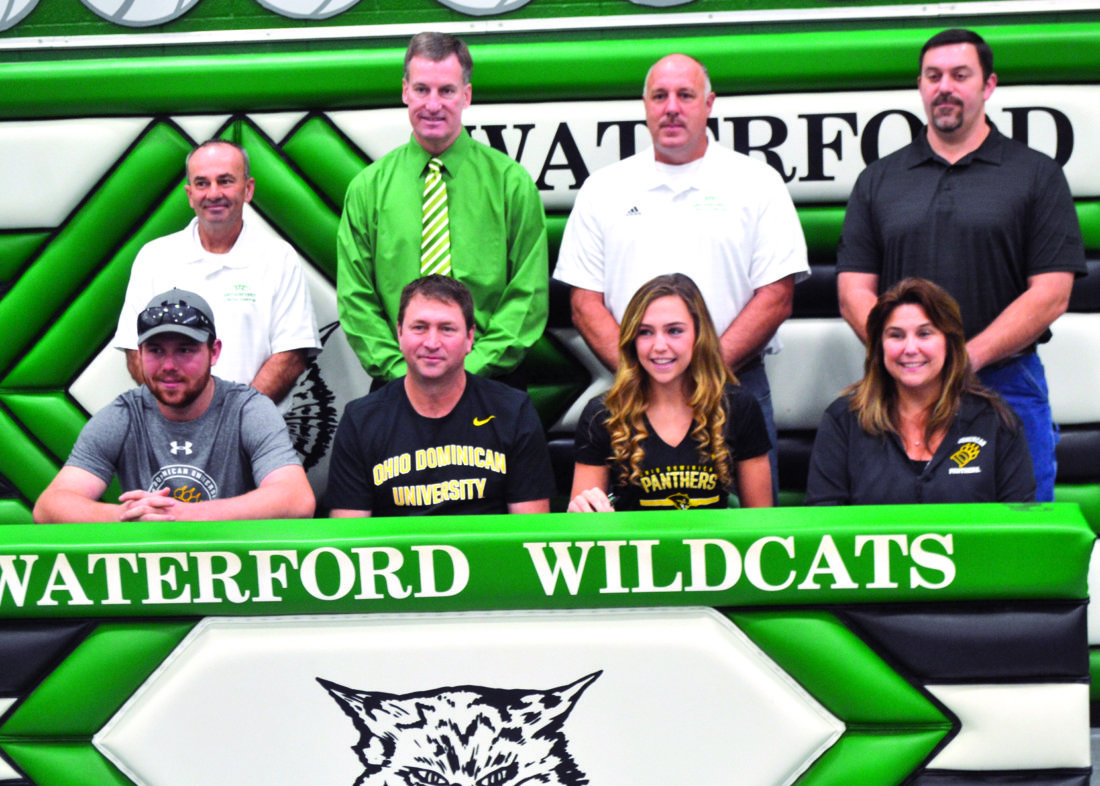 WATERFORD — Alli Kern has been a Waterford High varsity basketball starter since she was a freshman.

That in itself says a lot about her hoops ability on the court. The 5-foot-9 cager’s “got game.”

On Wednesday morning in the Cooper Annex gym, the 17-year-old Kern signed a National Letter of Intent to continue her education and play basketball at Ohio Dominican University in Columbus. Photographed with her at the ceremony were her parents’ Dan and Cindy Kern; brother Luke Kern; Waterford assistant coaches’ Todd Hilverding and Kevin McCutcheon; WHS head coach Jerry Close; and AAU coach Jeff Smith.

“Ever since I was a freshman, we’ve been playing tournaments up there and during the summer we play school ball up there,” Alli Kern said. “It just felt like home to me and I connected real well with the coaches when I talked to them. It has my major nursing.”

Ohio Dominican is an NCAA Division II school, located in Columbus. The Panthers, who compete in the Great Midwest Athletic Conference, are coached by Lynsey Warren.

This season, ODU is scheduled to play at Ohio Valley University in Vienna, W.Va. (near Parkersburg) Dec. 2 and then will be hosting Walsh University on Jan. 30, 2018. Walsh is where Kern’s good friend and Wildcat teammate Megan Ball will be playing next year.

Kern currently owns a 3-8 GPA in the Waterford classroom. At Ohio Dominican, she’s planning to major in biology (nursing).

Also a standout volleyball player, Kern was recently honored as a District 13 second-team pick in D4.

When she was a sophomore, she was instrumental in helping the Wildcats earn their first state tournament berth in Dayton.

As a basketball player, though, Kern’s been a member of three straight Waterford state tournament teams. During her sophomore year, the Wildcats won it all, beating Fostoria Wendlin, 29-27, at the Jerome Schottenstein Center on the campus of The Ohio State University.

“Alli will become a four-year starter for us,” Close said. “She hasn’t missed a varsity game.

With Kern on the floor, Waterford has posted a three-year record of 80-7 (.875 winning percentage).

Last season, she was named (along with Ball) to The Associated Press D4 All-Ohio first team. She averaged 12.4 points, 7.2 rebounds, 2 assists, and 3.3 steals per game. She also shot 43.3 percent from the field.

“I like to shoot from the outside a lot,” Kern said, “but I’ve been working on going to the basket more to help make our team better.”

“We’re all super excited to get back in the gym,” Kern said. “Our goal is obviously to get back to state. If we work hard and together, we can.”