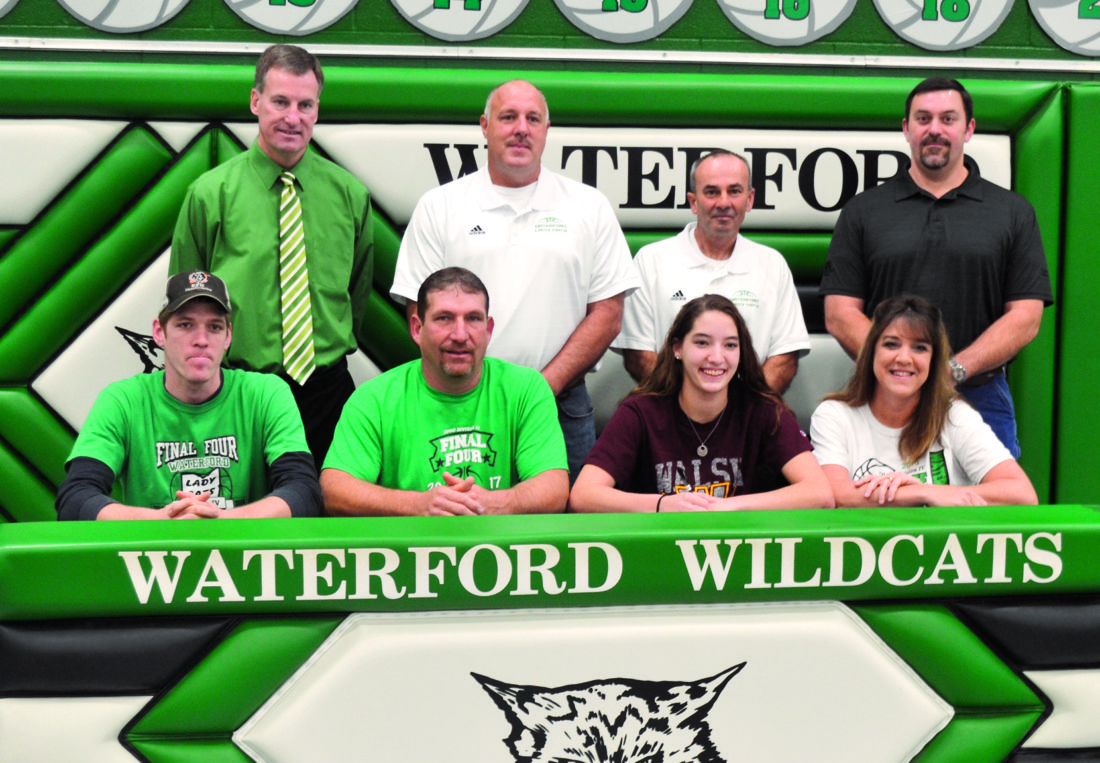 WATERFORD — Megan Ball is one of those basketball players who can play any position on the hardwood.

“We can put Megan wherever we want to,” said Waterford girls’ head basketball coach Jerry Close. “She can bring the ball up the floor. We’ve also used her in the post and coming off the wing. Megan’s very versatile and very athletic as well.”

That versatility and athleticism should serve the 5-foot-11 Ball well at the next level of competition. On Wednesday morning in the Cooper Annex gym, she signed a National Letter of Intent to continue her education and play hoops at Walsh University in North Canton. Photographed with her at the ceremony were her parents’ Darren and Lisa Ball; brother Travis Ball; Waterford assistant coaches’ Todd Hilverding and Kevin McCutcheon; AAU coach Jeff Smith; and Close.

“I went to the campus, and it had that home feeling,” said the 18-year-old Ball. “It’s not that far from home in Waterford, about an hour and 45 minutes. So, my parents and my family can come to home games if they want. It felt like home to me, so that was definitely it.”

Walsh is an NCAA Division II school, located in North Canton. The Cavaliers, who play in the Great Midwest Athletic Conference, are coached by Kate Bruce.

Ball currently owns a 3.9 GPA in the Waterford classroom. At Walsh, she’s planning to major in physical therapy.

“I want to be able to work with both athletes and patients,” she said.

Ball said that she also considered going with her good friend and green and white teammate Alli Kern to Ohio Dominican University in Columbus.

“The program for my major at Walsh was a little better,” she said. “So, I did what was best for my schooling.

“Also, I could’ve played both basketball and volleyball at Ohio Dominican, but I just want to stick with one sport in college.”

Recently, Ball was honored as the the District 13 Division IV Volleyball Player of the Year on offense. When she was a sophomore, the front row hitter helped the Wildcat netters earn their first state tournament berth in Dayton.

As a basketball player, though, Ball and Waterford have been in the Final Four at state in Columbus three consecutive years.

“Watching Megan grow up as a peewee player and a junior high player, you just knew she was going to be something special,” Close said. “She was a big part of us getting to state and of us winning a championship when she was a sophomore.”

When Waterford clinched the Ohio DIV crown with a 29-27 triumph over Fostoria Wendlin at the Jerome Schottenstein Center on the campus of The Ohio State University in 2016, Ball scored the winning basket on a drive in the lane in the final seconds.

Since Ball has been a varsity Wildcat player, Waterford has posted a three-year record of 80-7 (.875 winning percentage).

Last year, Ball was named (along with Kern) to The Associated Press Division IV All-Ohio first team. She averaged 13.5 points, 5.4 rebounds, 1.9 steals, and 3.4 assists per game. From the floor, she made 56 percent of her shot attempts.