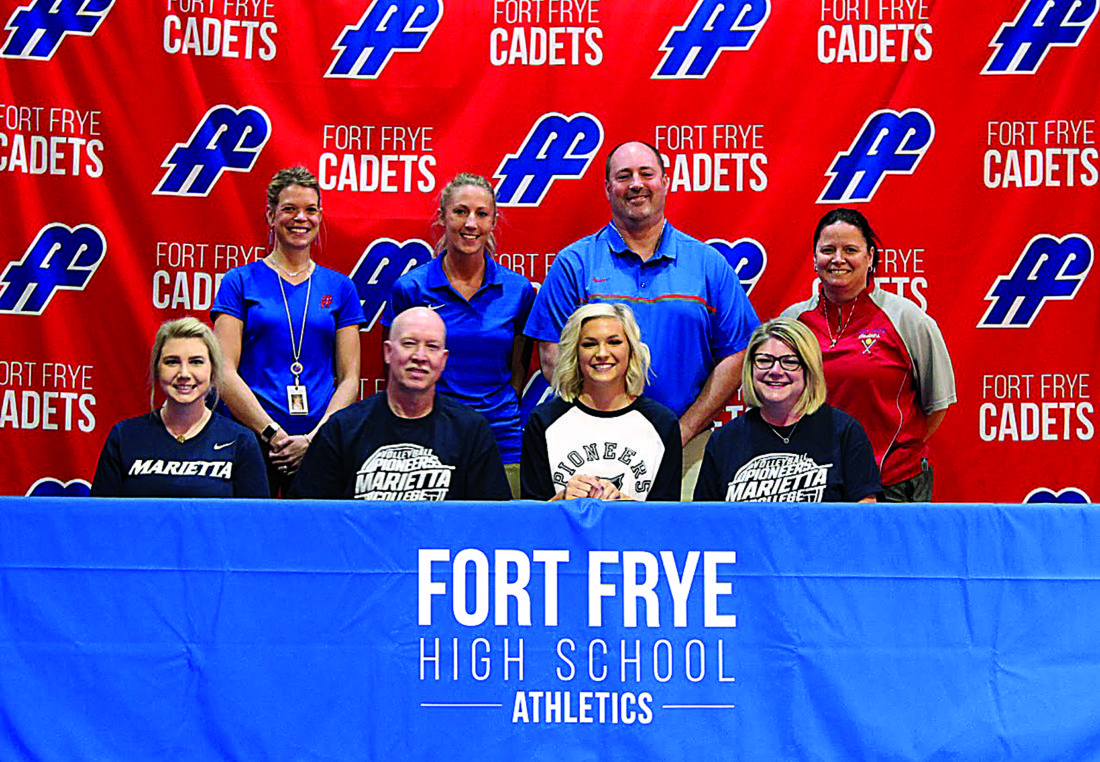 BEVERLY — Alissa Ginther, one of the best prep middle hitters in the Mid-Ohio Valley, is planning to compete at the next level.

The 6-foot-1 Fort Frye High senior netter announced her intentions of continuing her education and playing volleyball at Marietta College after graduation in a commitment ceremony in Cadet Gymnasium May 4.

“Originally, I was thinking of going to Ohio University, but it’s a big school, and I wanted something smaller and closer to home,” said the 17-year-old Ginther. “I visited Marietta College, and it just felt so much like home. I’m very happy with my decision.”

Ginther is currently undecided on a major at MC. At Fort, she is the owner of a 3.4 GPA (grade point average).

Marietta College is an NCAA Division III school and a member of the Ohio Athletic Conference. Last season, the Pioneers were 11-18 overall and 3-6 in the OAC.

This upcoming season, MC will be guided by first-year head coach Kristy Newman.

At Fort Frye, Ginther was instrumental in helping the Cadets, who hadn’t won a district crown since 1986, claim two consecutive Ohio Division IV sectional and district championships. FFHS bowed out in a Sweet 16 regional semifinal both seasons at Lake High.

“She’s a great girl, and a phenomenal player,” said Fort Frye head volleyball coach Tiffany Schob. “I couldn’t be more excited to see her play at the next level!.

“Above and beyond her stats, she carries an infectious positive, high-energy attitude when she steps on the court. She played such a huge role for us, and we’re excited for her future.”

At Fort Frye, Ginther is also a cheerleader and tumbler — and is very proficient in a backhand spring. Her other school activities include student council, Safety Town, and Outdoor Ed Counselor.

Ginther is the daughter of Dan and Lori Ginther.