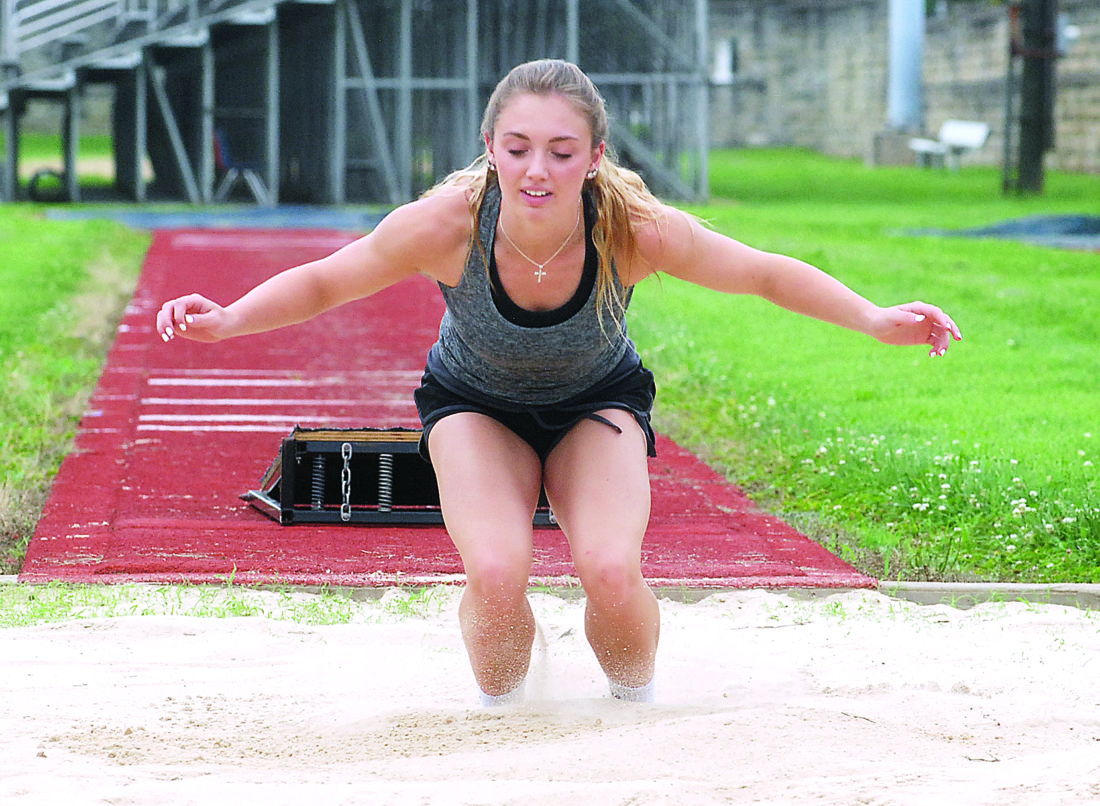 JORDAN HOLLAND The Marietta Times Marietta High’s Torrance Nonnenmacher practices Wednesday at Don Drumm Stadium. She will be competing in the long jump at the state track meet Saturday at Jesse Owens Memorial Stadium in Columbus.

After her track season ended at the regional meet in Pickerington a year ago, Marietta High’s Torrance Nonnenmacher started spending time in the weight room.

Focusing mostly on leg and ab workouts, Nonnenmacher has developed into one of the best long jumpers in all of Ohio. She’ll get a chance to go up against the best competition in the state at 3 p.m. Saturday at Jesse Owens Memorial Stadium, needing an eighth-place or better finish to clinch All-Ohio honors.

“Over the summer, I got into lifting for the first time,” said Nonnenmacher, the first Marietta girl to get to state since Paige Grosel in 2012. “Up to this point I’ve just relied on my athletic ability, until this summer. This summer I started actually lifting a lot so that’s really helped me with my speed and power. I think that’s a big factor as to why I’ve improved so much in just a year.”

A junior, Nonnenmacher set the girls school record in the long jump earlier this year. Her latest jump of 17 feet, 9.5 inches at regionals is the current record. She’s hoping to improve on that at state, with 18 feet being her goal.

“Out of anything, I want to get to 18 feet,” she said. “I think if I get to 18 feet that would give me a pretty good shot at getting on the podium.”

“She’s been really consistent in the 17s and continually breaking her own school record. I think 18 is her next goal.”

Of the 16 girls scheduled to compete in the Division I long jump, the top regional mark is 19 feet by Mentor freshman Paige Floriea. After that, nine of the girls are within five inches of each other, including Nonnenmacher.

“I think she has a great opportunity to place,” Schramm said. “Everybody is within a little more than a foot from first place, so one good jump with some adrenaline could get her on the podium.”

It’s shaping up to be a competitive event, which is fine with Nonnenmacher.

Nonnenmacher never has been to state, as a competitor or a spectator. Not knowing exactly what to expect, she got some advice from someone who was there recently.

“I think it’s definitely going to be crazy, like nothing I’ve ever been a part of before,” she said. “Travis Moore (an all-state hurdler) went last year and he told me not to really sweat it or anything. Just trust the training I’ve already done this year and go and enjoy the experience and not worry about it or get nervous.”

Schramm also gave Nonnenmacher an idea of what to expect.

“Going into that stadium and knowing what you’re there for can cause some nerves,” Schramm said. “I said let’s keep the routine, sleep in your own bed, get up like you normally do, and those are the kinds of things that can just make it like another track meet.”

Regardless of what happens Saturday, getting to Columbus as a junior is no small feat for Nonnenmacher, who reflected on how her sophomore season ended.

“Last year, I didn’t even make it to the finals in regionals,” she said. “I went and only did three jumps, so this year, I don’t even know what happened. I kind of just got really good at it and found my groove.

All that time in the weight room certainly didn’t hurt, either.

“It’s her hard work, and her work ethic,” Schramm praised. “She’s determined and she doesn’t let those outside influences get to her. She’s pretty solid, not real nervous, and I think that helps.”